The Radeon R9 Nano was launched a few days back, featuring the Fiji XT GPU core and HBM architecture. The Radeon R9 Nano was said to be "Library Quiet" with load noise of just 42 dBA but it seems like the small form factor card suffers from major coil whine issues as reported by all the tech sites who managed to get a review sample of the card. 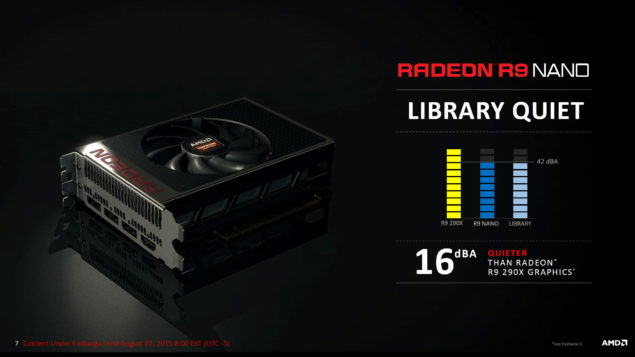 Current generation cards have faced issues when it comes to load operation and coil whine. NVIDIA's GeForce GTX 970 was the first card to have major issues when it came to coil whine and it took several months for AIBs to offer revised variants with improved components to eliminate the coil whine problem. The most recent GPU to have coil whine issue was the Radeon R9 Fury X. The AMD Radeon R9 Fury X is AMD's flagship graphics card based on the same chip as the Radeon R9 Nano and came with AIO liquid cooling. The R9 Fury X was affected by both coil whine and pump noise issues. The main issue was with the poor quality chokes which made their coils vibrate under load causing a buzzing noise to originate from the card. The cooler pump also created the same buzzing noise that added to the overall noise created by the single card.

Now AMD's Radeon R9 Nano is facing the same issues as their Radeon R9 Fury X. Some tech sites have already stated down comments in their reviews regarding the immense coil whine generated by the Nano card. Forums such as overclock.net has already made a list of these sites and compiled them as seen below:

PCPer:
When AMD launched the AMD Fury X card, one of the difficulties that AMD had was the annoying pump whine that permeated through the initial run of testing samples as well as the first batch of retail samples. AMD claims that a fix has been put in place for this but honestly we haven’t been able to get a hold of any other product from later production runs to validate that claim.

Because of that calamity I was disappointed to power on the R9 Nano for the first time on our test bed and hear the sound of coil whine from the card. This wasn’t the same problem as the Fury X, obviously, but instead the clear sound of inductors generating a buzzing sound that varies as the frame rate in the game changes. In a loading screen that is hitting 400 FPS? You are going to get a high pitched whine from the card. Playing a game at a modest 45 FPS? The sound will be a much gentler, lower pitched buzzing similar to that of a bumblebee.
The annoyance of this coil / PWM noise is going vary from user to user I’m sure, but the consensus in the office is that because the noise varies with the frame rate of the game it is MORE noticeable than the pump whine we found on the Fury X cards earlier in the summer.

Eurogamer:
Our only gripe comes from the dreaded 'coil whine' - the R9 Nano is much louder here than the Fury X, a card we re-tested during production of this feature. It sounds akin to a constant buzzing, something that may be unique to our particular review sample.

Bit-Tech
In the acoustic department, our main gripe with the R9 Nano is actually the coil whine we experienced throughout testing which was often considerably more obvious than any system fan noise. For such a premium graphics card, we would expect the use of better components and greater quality control to prevent coil whine, or at least to dampen it to some extent, and we hope that when retail availability proliferates AMD ensures coil whine is fixed, or at least minimised.

HardwareHeaven
Coil Whine/Noise as it is commonly called is very much an issue on the R9 NANO. At above average framerates its almost a rattle and then as the FPS escalate it really turns into a near whistle. It’s the worst case of this phenomenon we have heard to date and it was close to causing the R9 NANO not to get any sort of award/recommendation.

LegitReviews:
AMD has only sent us two Fiji based cards and the Fury X has really bad pump whine and the Nano has choke whine. We know that AMD put a ton of time and effort into making the build quality on this card one that was said to be premium, so it’s really shocking to see that another noisy card was delivered to us by AMD to review. The choke noise on the AMD Radeon R9 Nano isn’t nearly as bad as the pump whine on the Fury X, but it’s something we don’t expect to see on a $649 video card here in 2015 where premium components are readily available.

TweakTown:
Major Coil Whine: This is seriously annoying, but only in an open test bed. Inside of a system it will be much better, but I need to question this. Is AMD having issues with the Fiji-based cards? Because the Fury X had serious whine from the cooler too, but the R9 Nano doesn't have a watercooler or a pump. What gives?

Hexus:
However, we noticed significant coil whine across our suite of games, particularly in Total War: Rome II. This may be sample-specific, but it would grate us long term if this was the case with all cards. 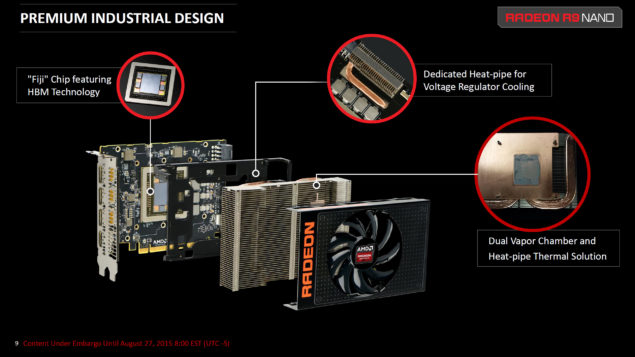 While AMD fixed the Radeon R9 Fury X noise issues to some extent with a revised pump variant later on, the coil whine issues still exist on most Fury X cards. The reason is due to the poor quality chokes found on AMD's reference cards while the Radeon R9 Fury (Fiji Pro) which got custom variants from AIBs doesn't has any coil whine issues. Both the Radeon R9 Fury X and Radeon R9 Nano are made exclusively by AMD and offered in the reference variants. The issue arises when the GPU goes under gaming specific load and clocks in around 800 to 850 MHz which is the average operating frequency of the Nano card. The Nano will likely have higher sound level when operating around its maximum frequency around 1000 MHz. Furmark benchmarks don't give out an actual representation of load situations since the GPU is meant to clock down to 600 MHz in GPU burner apps. AMD hasn't issued an comment on the Radeon R9 Nano coil whine problems but it seems like they will have to issue a revised version of the Nano sooner or later if more people start complaining about the card which retails at a premium price of $649 US. Some videos can be seen below which show the extent of the noise issues faced on Nano cards: (Thanks to CloudFire for the tip!)