AMD's Radeon R9 Nano is going to hit the market this week on 10th September 2015. We know that the Nano is powered by AMD's flagship Fiji graphics core but what is more interesting is that AMD will be allowing Cross Fire compatibility of the Radeon R9 Nano with their Radeon R9 Fury X graphics card that has been available in the market since June 2015. 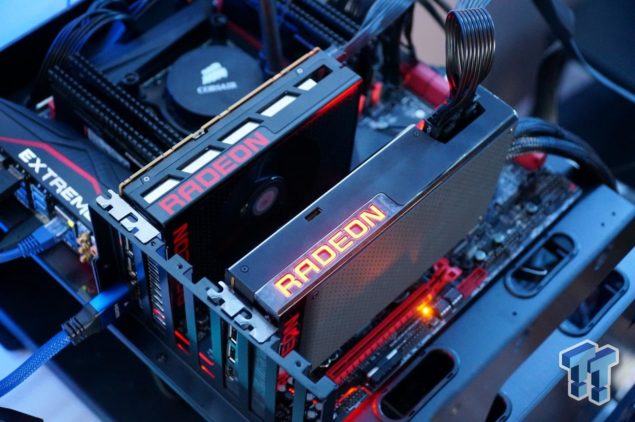 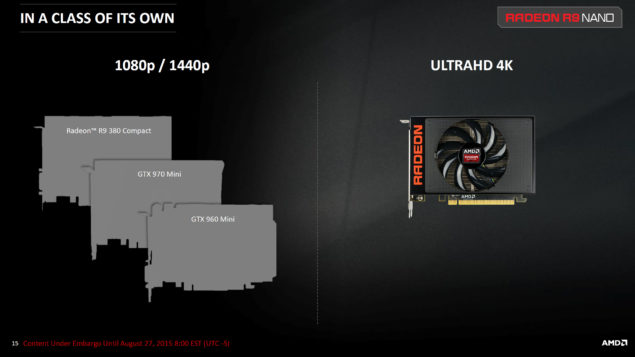 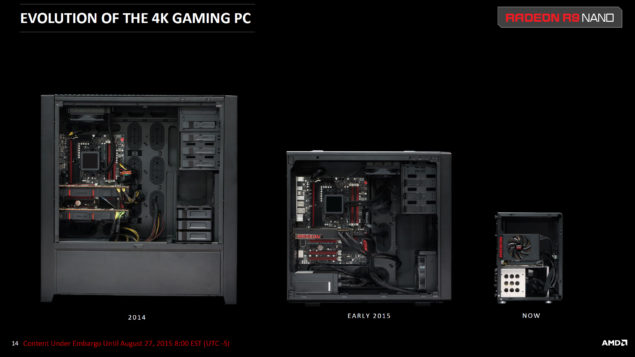 Retailing at a price of $649 US, the pricing is quite steep but AMD has again and again mentioned that the performance of this super small form factor card falls in the same league as their Radeon R9 Fury (Fiji Pro) graphics card. This is around 10% slower than the Radeon R9 Fury X but still quite a lot of performance for Mini-ITX based solutions. Users owning the Radeon R9 Fury (Fiji Pro) can add a Radeon R9 Nano to their rigs saving both room and adding incredible performance while Fury X owners may want a really good reason to CrossFire a Radeon R9 Nano graphics card. Since the performance level is around 10% short of the Fury X and retailing at the same price of $649 US, the R9 Fury X is the better choice over Nano to CrossFire with unless you have a really small PC with no room to add an additional 120mm radiator which the reference Fury X comes with. Only then, you might want to add a R9 Nano to the rig and that's the whole point of the Nano. It's built for small form factor PCs as Fury X already exists as a better option for users with massive full-size and mid-tower rigs. Now there's a lot of you who have been waiting so long to see the performance numbers of the Radeon R9 Nano card but you will have to wait just three more days to feast you eyes upon the reviews from various tech sites.