Every time the flagship GPUs from both sides launch, people are on the lookout for benchmark comparisons. But perhaps nothing screams the ultimate showdown as much as not one, not two but four Nvidia GTX TITAN-X's and four AMD Radeon R9 Fury X going head to head in a 4K (dare I say it) battle to the death. The benchmarks have been provided courtesy of DGLee over at IYD.KR.

Allow me to indulge myself this one time. Ladies and gentlemen, welcome to the Four, Four, Four, 4! On one side of the ring, hailing from parts unknown and shrouded in Red, we have the mysterious AMD Radeon R9 Fury X.  On the other side, the defending champion, the king of Green, the Nvidia Geforce GTX TITAN-X. The arena is 4K and the name of the games are given below. Now that I am done being childish, given below are the specifications of the test system used to run the benchmarks:

Since DGLee is using Windows 8.1 OS, we are stuck with DirectX 11 and I think our readers with agree with me here that this rig leaves no room for CPU bottlenecks. With one of the most powerful processors known to man, rocking 16 threads, this processor has all the overhead necessary for running 4 GPUs at once (not to mention the required PCI-e lanes). At any rate, even if there is CPU bottlenecking to any significant degree, since both cards will be tested on this system, the test is scientifically correct. Without any further ado given below are the benchmarks starting with 4K: 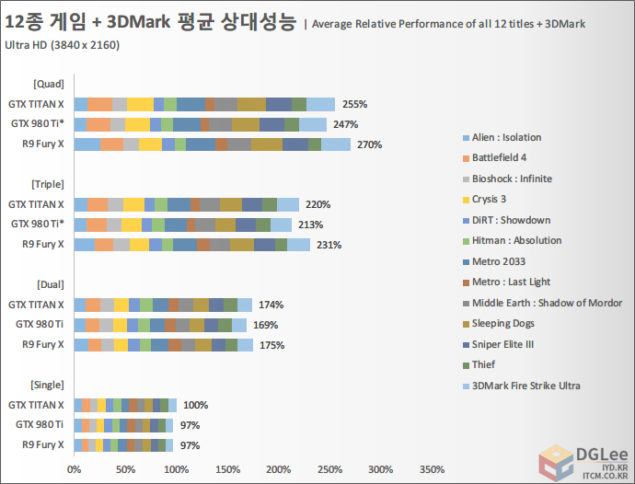 Something very interesting is happening in these 4K benchmarks. When running a single card, the Geforce GTX TITAN-X takes the lead, whileas the GTX 980 Ti and the Radeon R9 Fury X are exactly head to head. Upon adding one more graphic card to the mix, the GTX 980 Ti falls behind. Out of the TITAN-X and the R9 Fury X, the latter gains the lead. In both Triple and Quad configurations, the Fury X easily pulls ahead, putting as much as 15% (overall) difference between the green counterparts. Take a look now, at the the Quad HD standard (2560x1440): 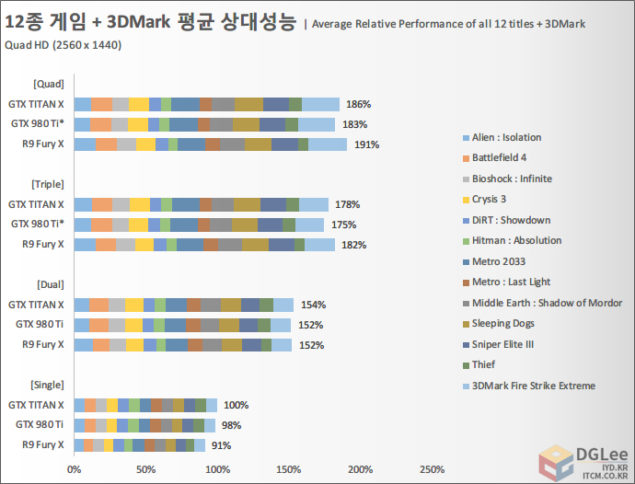 Here, there is quite a big difference between the green team and the red team. The R9 Fury X is behind by 7 percent to the GTX 980 Ti and almost 10% to the GTX TITAN-X. Upon adding another card, the Fury X pulls up with the 980 Ti while as the TITAN-X enjoys a lead of 2%. Just like before the Fury X scales better in Triple and Quad configurations but the difference is slightly less this time. Finally, here is the overall result of the 1080p standard: 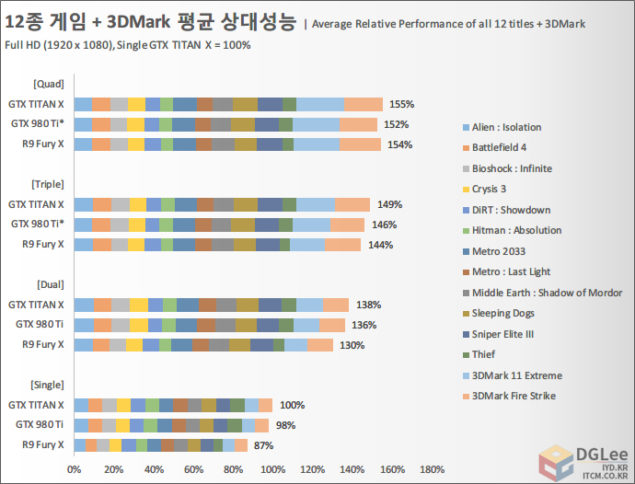 At 1080p, the R9 Fury is approximately 13% overall behind the TITAN-X and the green counterparts maintain their lead as the Crossfire or SLI scales with approximately the same aggregate performance in Quad SLI/CF. Something very interesting happened in these benchmarks. For one thing, we know that the Radeon R9 Fury scales much better than the Geforce counterparts upto and including Quad Crossfire, whileas the TITAN-X and the 980 Ti only scale well up to Dual SLI.

We also see that in FHD and QHD Nvidia's GPUs have a distinct advantage in Single and Dual GPU Configurations, whileas in 4K the advantage goes to AMD. Ofcourse one thing you have to realize is that the above benchmarks are aggregated and if you want a more detailed idea then looking at individual benchmarks is a must. Since not all games have the same optimization for both IHVs, adding them all together will result in a high margin of error. There are some titles where the R9 Fury sweeps the floor with green mops and some where the opposite is true. Therefore, the only safe thing to say would be: Both offerings exchange blows, resulting in what could only be called, dead heat. If you want to investigate more into the matter, here are the individual and detailed benchmarks: