AMD is preparing their flagship Radeon R9 295X2 Dual Hawaii graphics card for launch next month and while we don't have any concrete details regarding the card, AMD themselves have stepped forward and released a teaser shot of their dual chip monstrosity. The card is supposed to launch in the first week of April. 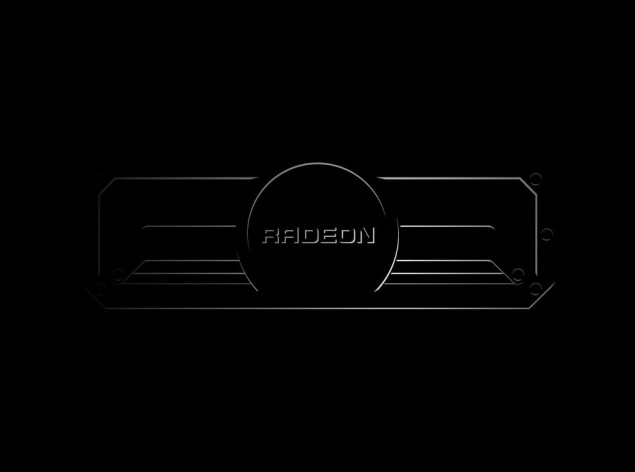 If you have been paying attention to the recent posts, AMD is going to answer NVIDIA's dual-chip GeForce GTX Titan Z with their own dual Hawaii based card. The specifications are a complete mystery at the moment since currently, we don't know whether the card would feature the full Hawaii XT graphics unit or the Hawaii Pro one which was featured on the Radeon R9 290 (Non-X). From what it looks like, AMD will compete with its competitor which is based on fully blown GK110 cores with their fully configuration Hawaii GPU. There's a reason why AMD went with a hybrid cooler in the first place. AMD could have gone with a lower clocked Hawaii Pro configuration and kept a triple fan design that cooled their Radeon HD 7990.

Previous reports mention a 1 GHz clock speeds on both cores so if AMD is adding up a Hybrid cooler and still fails to incorporate two of their full Hawaii XT GPUs, then that's a disappointment. So we will take it that the card will feature the Hawaii XT chip amassing an impressive stream processor count of 5632 cores compared to 5760 core count on NVIDIA's counterpart. The cooler will be a new step in the way companies handle GPU cooling, we have so far see several Dual Chip cards that only featured air coolers. AMD was the first to incorporate Vapor chamber and now they would be the first GPU manufacturer to add water cooling as a reference design. It will be nice to see a comparison of how the card handles thermals compared to the Titan Z which features a modified NVTTM cooler with a beefy heatsink and three slot design.

As for the memory, we think the card might use 8 GB of GDDR5 memory per core. That equates to 16 GB GDDR5 on the board and it should sound surprising considering AMD went with 16 GB GDDR5 on the FirePro W9100 card just a few days ago. It will also make the marketing scheme look good even if the card ends up proving just 8 GB of VRAM to end users. The card will be a great Eyefinity solution driving up multiple 4K monitors to power games and creation software. Miners could take the card as a good compute option to mine coins which in the end will drive up the cost of the graphics cards in retail outlets, we just hope it doesn't come to that. In terms of performance, we are looking at a legendary graphics card which will feature some decent scaling thanks to the XDMA CrossFire design implemented on the new cards and hopefully some optimized drivers would be available at launch too.

The tease itself is interesting since it shows the Hybrid cooler design of the card. We might be looking at the card from the top which shows a large circular area in the middle with a Radeon logo. It could be possible that a single fan is place inside this area while coolant pipes from the radiator go from the sides and to the both Hawaii GPUs.

It’s coming. Do you have what it takes? #2betterthan1 pic.twitter.com/pEIPmJukwY

It will be interesting to see how the card fares up against NVIDIA’s recently announced GeForce GTX Titan Z which features two GK110 cores but has a premium price point of $2999 US. The Dual-Chip Hawaii GPU will become a enthusiast offering from the company due to the Hybrid cooling implementation so we will see an higher price of around $1499 as compared to $999 on AMD’s last dual-chip card (Radeon HD 7990). The new Radeon R9 295X2 seems interesting but design wise, the props goes to NVIDIA due to a better cooler design. Since it features a hybrid cooler, alot of space would be occupied by the Radiator unit itself but at the end of the day, the card would be aimed towards enthusiasts with humongous chassis, enough to fit two of these cards. Rumors pointing at a second GK110 card have started to float across the web hinting at a lower cost Dual GK110 GPU variant which will be aimed towards gamers. This new card which is being called the GeForce GTX 790 is said to launch around April and will feature cut down GK110 cores though this isn’t confirmed yet.