It has been two days since AMD unleashed their new graphic cards which include the Radeon R9 280X, Radeon R9 270X and the Radeon R7 260X. The cards have been reviewed and we did a round-up on the cards from every major tech site which can be seen here. 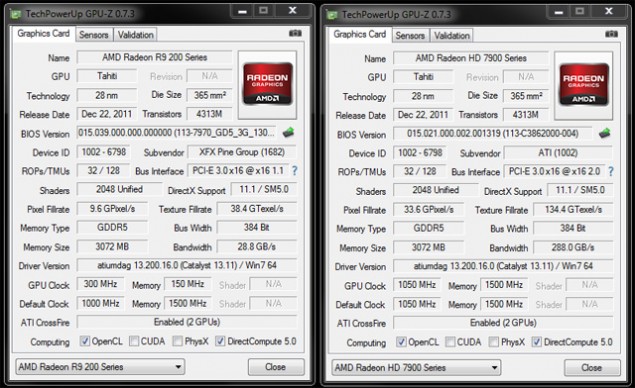 To enable CrossFire between the Radeon R9 280X and Radeon HD 7970, you simply have to grab the new graphic card, plug it in your PC, attach the CrossFire bridge and that's it. No sort of modifications or BIOS updates will be required between the two cards and is a very nice gesture by AMD to have enabled this by stock. The only down side is that the cards would have to scale their clock speeds down to the one of the slower clocked card which is something we are familiar with using CrossFire. You can also see CrossFire scaling comparison of two HD 7970's versus a HD 7970 + R9 280X setup in the following chart courtesy of HardwareCanucks: 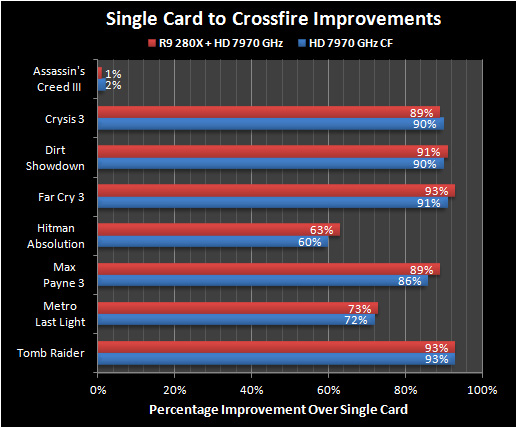 HardwareCanucks also reports that the Radeon R9 280X isn't the only card that enables this kind of CrossFireX comparability. The Radeon R9 270X which is based on the Pitcairn XT die codenamed to Curacao XT features the CrossFire compatibility with Radeon HD 7970 GHz edition, not the Tahiti LE model. Similarly, the Radeon R9 260X is CrossFire-Compatible with the Radeon HD 7790, both of which are based on the Bonaire ASIC silicon. This news is really great for AMD users and with the value the new cards offer, its something you can't miss out.