AMD is going to update their mobility lineup soon as some OEMs have already started to list down notebooks with the Radeon M300 series mobility chips. Lenovo already has a few laptops listed down with support of R9 M375 series graphics chips and a few with the lower end Radeon R5 M330 series chips which can be seen listed below. 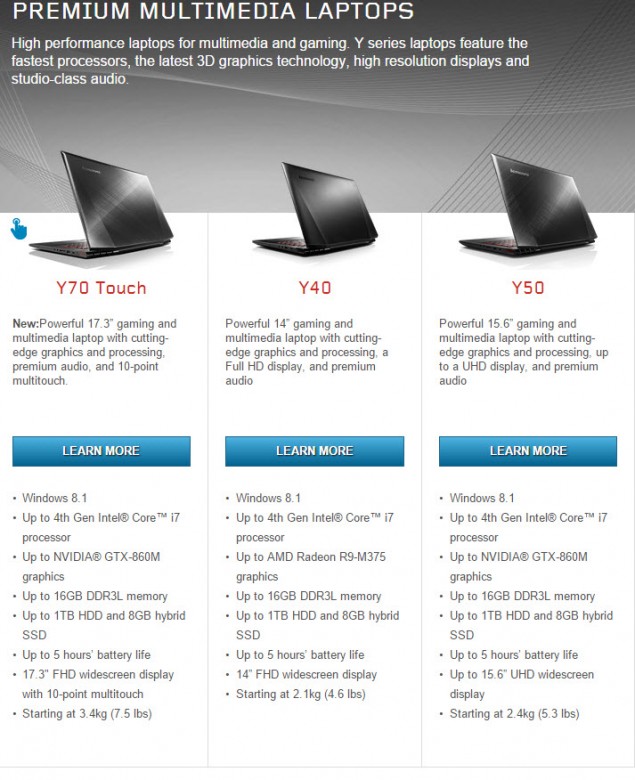 The new AMD chips were found in a verification driver that appeared on a Chinese website but have also been found in several online retail sites. Lenovo has the Radeon R9 M375 and Radeon R5 M330 chip officially listed on their site, featured inside their Y-40 laptop which boasts a 4th generation Core i7 processor and the Radeon graphics chip which comes with 2 GB of GDDR5 memory. The second device which can be seen in several stores is the Lenovo G50-80 which come with a 5th generation Core processor and the entry level Radeon R5 M330 chip. One of our Disqus member "Azraei Halim" pointed out that the notebook was on display at his local store in Malaysia. On inspecting the device manager, the notebook did actually feature the Radeon R5 M330 GPU however, the specifications couldn't be confirmed at the spot. It could be an indication that AMD will have a few chips for launch ready in the next couple of weeks against NVIDIA's recent Maxwell entries in the mobility market.

Some specifications of the Radeon R5 and Radeon R7 series chips confirm that they will feature 1-2 GB of DDR3 memory across a 64-bit interface. The mid-tier Radeon R7 series chips will give a choice of either DDR3/GDDR5 memory choices (1-2 GB) along a 64-bit or 128-bit interface. The top chips will have 4-8 GB of GDDR5 memory running across a 128-bit or 256-bit interface. No other specifications can be confirmed ata the moment but a few benchmarks of the Litho Pro/XT and Strato Pro/XT chips which are the internal codenames for the soon to be launched chips were reported a few months back.

One shipping entry (Litho XT) is relatively recent while as the other (Strato PRO) is relatively old. AMD’s Strato PRO is a Type B MXM GPU with 4GB of GDDR5 memory. Similarly, Litho XT is a Type A MXM GPU but has just 2GB worth of GDDR5 memory. Ever since we discovered the benchmarks of the Carrizo prototype on GFXBench, I have been keeping a close eye on it for more leaks and today, I was not disappointed. Right there in plain sight, was a GPU by the ID “AMD Strato XT (6646)”. The proceeding four digit number is a typical AMD prototype indicator and was actually used in the Carrizo leaks to trace it in the SiSoft Sandra database. Needless to say, the entire affair reeks ‘legit’, not to mention it is nearly impossible to fake benches on GFXBench. Anyways, here are the benchmarks of the Strato XT Mobility GPU:

It can't be pointed as to what would be the Strato XT be a replacement for but the performance seems close to the Radeon R9 M295X which is based on the Tonga die. AMD will also make use of Tonga in their mobile chips again and most of the low-end chip are rumored to be based on the Oland graphics architecture which can be found on low-end Radeon R7 240 and Radeon R7 250 desktop graphics cards. With Carrizo APU coming in mid of 2015, we will start looking at more information on the high-performance mobility parts from AMD.