AMD has just unveiled The Radeon Fury X and 300 series at E3. But today we finally get to take a look at the gaming performance of Fury X. I have to admit that it's been a long wait for Fury X and AMD's Fiji GPU. But they're finally here and they're finally official. 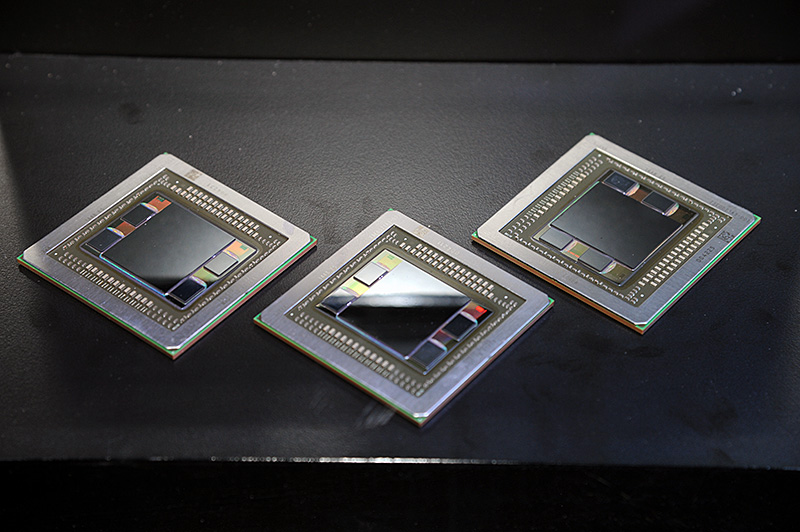 So far AMD has officially announced its fastest single-GPU offering in the form of the R9 Fury X. Powered by the Fiji XT GPU which AMD has proclaimed to be the fastest graphics chip in the world. Which also happens to be the first ever to feature High Bandwidth Memory. We've covered this memory technology in detail last month when AMD announced. So make sure to check out our article to learn what this new memory technology is and what it means. AMD revealed that Fiji XT packs 4096 GCN stream processors and an equally impressive 4096bit wide memory interface enabling over half a terabyte of bandwidth per second. 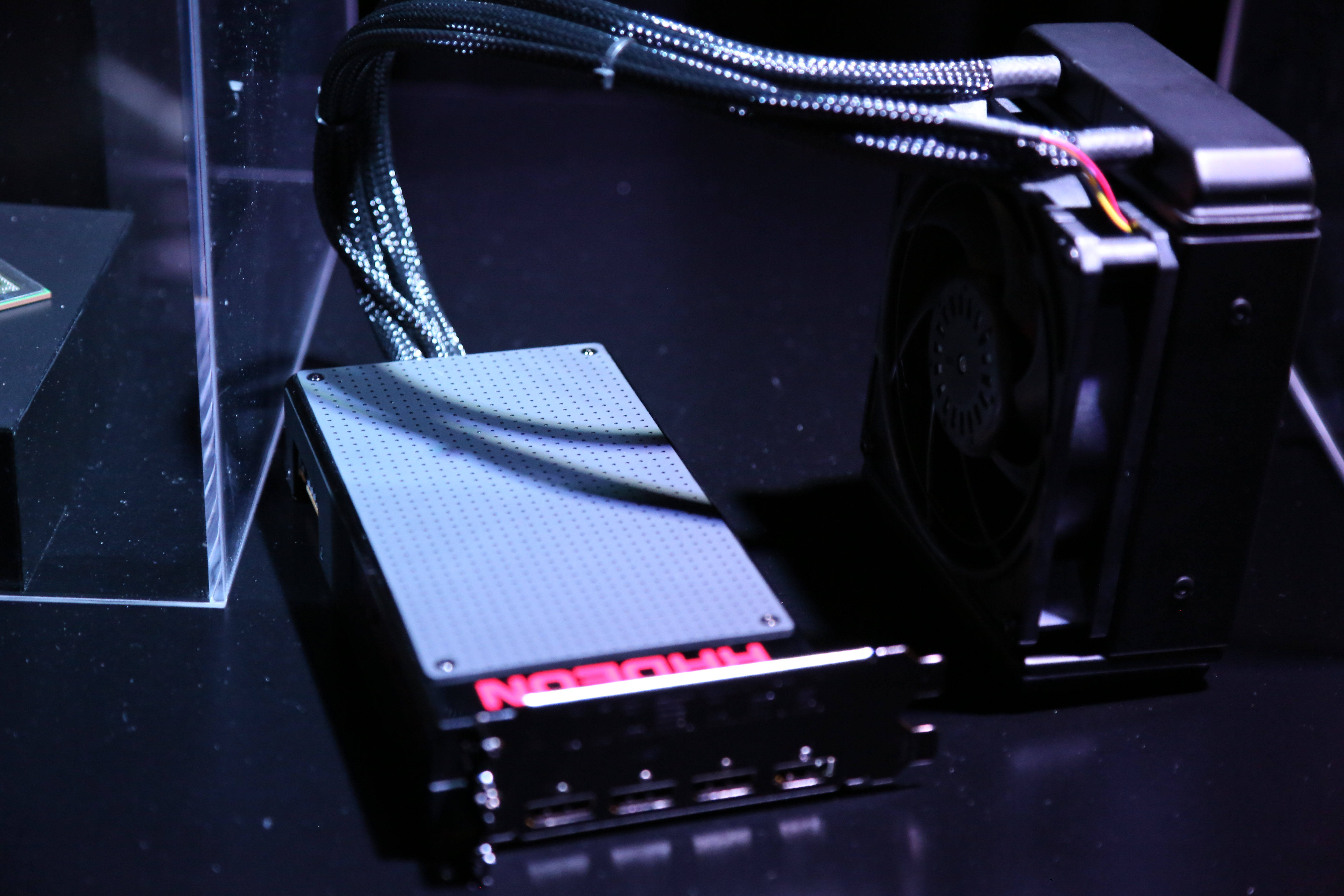 In addition to the R9 Fury X AMD also introduced the R9 Fury graphics card. Which also features the same Fiji GPU and High Bandwidth Memory technology. AMD did not disclose any specifics about Fury other than that it will be air cooled, launch on the 12th of July and cost $549.

However the red team did not stop there and they surprised us with two other graphics card. Radeon Nano and a dual Fiji / dual Fury X behemoth. Both of these cards are also based on Fiji silicon and HBM technology.
Lisa Su, AMD's President and CEO revealed that Radeon Nano is faster than an R9 290X and has twice the performance per watt of that card. All the while measuring 6 inches in length, making it by far the fastest mini-itx graphics card in existence.

Finally they dropped a bomb shell and showcased a dual-GPU Fury monster, with over 17 TERAFLOPS of computing power. Making it the fastest dual GPU card in the world and the fastest graphics card overall. AMD did not give this board a name but we'll call it Fury X2 until AMD names it.

Finally we come to the matter of gaming benchmarks. Needless to say these newcomers will be AMD’s fastest and most advanced graphics chips to date. The Fiji GPU, both the XT and Pro variants, form the foundation of AMD’s new ultra enthusiast “Fury” brand. But today we'll only get to look at the performance of the R9 Fury X. 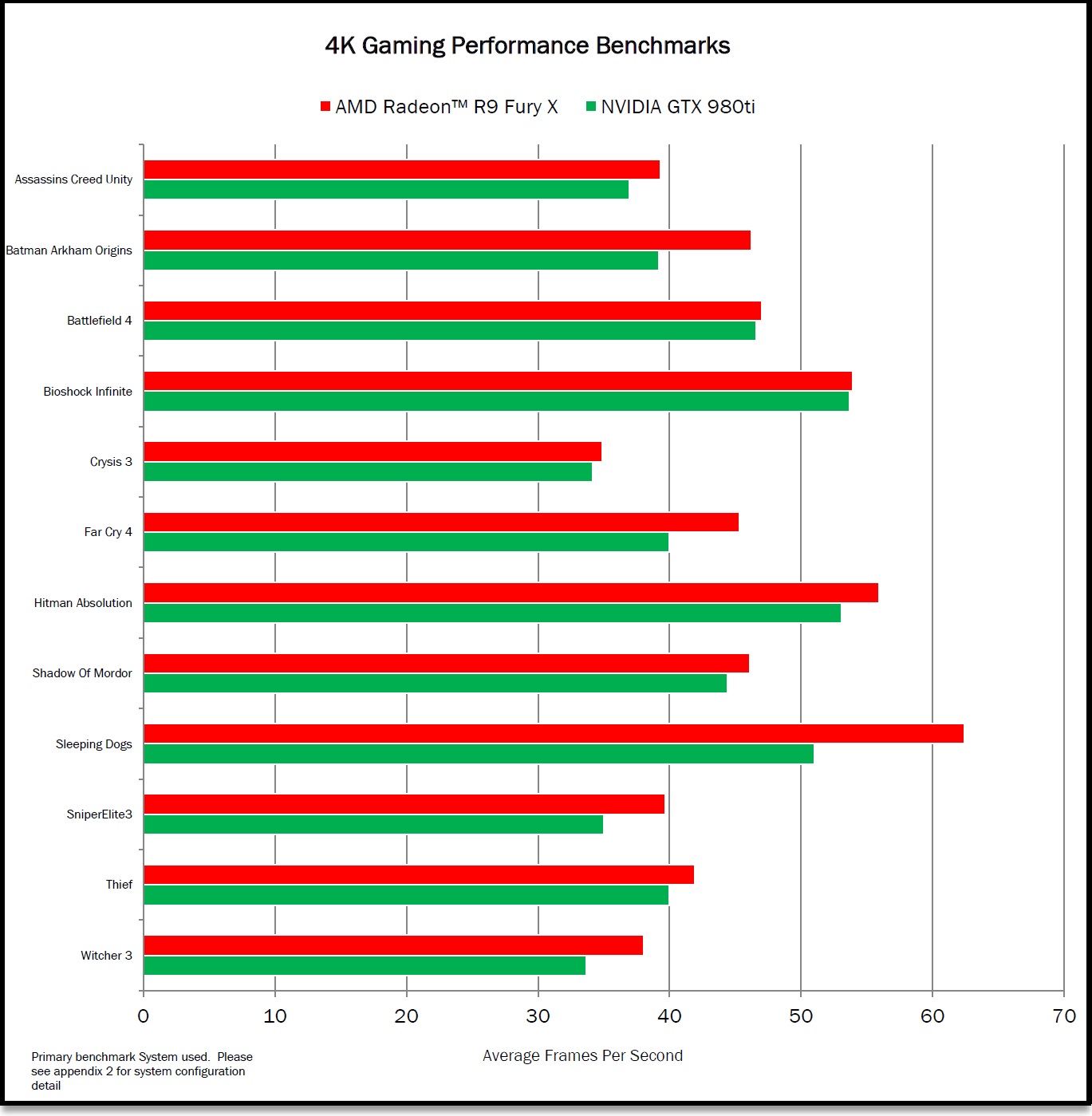 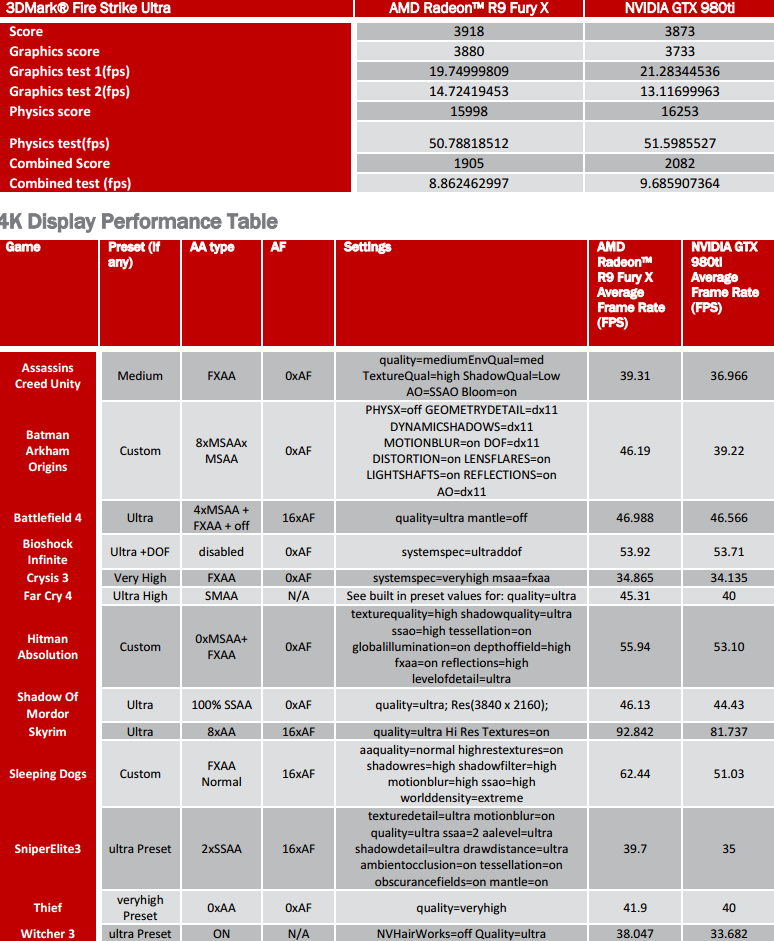 These results were provided by AMD, although I have no reason to believe that they are in any way disingenuous or inaccurate. In fact I was quite surprised by the selection of games AMD had chosen, many of which are Nvidia optimized titles. Yet the R9 Fury X comes out on top in every single one of them, although in a number of games the result is much closer to a tie. And based on what we know of the 980 Ti's and Titan X's performance, substituting the 980 Ti with a Titan X will not do much to close the gap. Granted the Titan X will edge out Fury X in a handful of the tested games, but that's not going to be enough to change the outcome.Fury X would still end up with more wins than losses.

To be completely honest I can't say I'm surprised. With the board quality, power delivery and overkill cooling solution AMD has equipped Fury X with. They could easily push the clock speeds as high as they need to, to insure that Fury X outperforms the competition.

Although it's evidently clear that at the end they did not need to resort to that. The GPU operates at an average temperature of 50c under a typical gaming load and dissipates no more than 275W. The same power rating AMD gives to the R9 390X in fact. Something which would not have been achievable had they decided to push the clock speeds and consequently the voltages.

Finally I'd like to briefly touch on the "Fury" name itself. It's a classic brand name that had existed a long while ago and is now returning. There are several reasons as to why AMD decided to resurrect the “Fury” brand name with Fiji. Chief among which is that with Fiji AMD has introduced the world’s first GPU featuring 3D stacked High Bandwidth Memory, otherwise known as HBM. Another reason is the sheer performance of the chip, which AMD has proclaimed to be the fastest in the world. A claim that independent testing will have to validate but is never the less not unbelievably far fetched or unrealistic. To crown these achievements AMD decided that a simple numerical product name will not do this chip justice and thus Fury was reborn.

In addition to the gaming benchmarks shown above AMD also shared some overclocking data about Fury X. For example AMD tells us that  a 1150Mhz clock speed, a 100Mhz overclock over the 1050Mhz stock, is quite easily achievable with AMD's OverDrive overclocking tool found in the Catalyst Control Center. The OverDrive tool does not support over-volting, so this overclock is attainable with stock voltage. AMD tells us that all AMD Radeon R9 Fury X graphics cards should be able to run at this clock speed without any issue.

Fortunately, AIBs such as MSI and Sapphire provide their own overclocking utilities such as Afterburner and Trixx. These utilities do support over-volting and because the liquid cooling can easily handle the additional thermal load we're looking at clock speeds that will undoubtedly exceed that 1150Mhz mark and well into the 1200Mhz+ range regardless if you have won the silicon lottery or not.

If what AMD's telling us is true, then Fury X will be AMD's best overclocking graphics card yet. As a 1150Mhz clock speed at the stock voltage was more of a rare occasion on AMD's previous 200 series and HD 7000 series reference designed cards. Certainly some AIB designs boasted significantly higher clock speeds and overclocking potential than others, but usually through higher factory set voltages and definitely not on a scale as grand as nearly every Fury X card. In fact we're betting that AIBs selling Fury X will very likely apply hefty overclocks to the reference design, thanks to the highly capable 400A power delivery circuitry and the robust cooling solution.

Finally we come to memory overclocking. AMD states that there is no memory frequency slider for Fury in the OverDrive utility. So you cannot adjust the memory frequency using Catalyst Control Center. However since AMD does not impose restrictions on AIB's we're likely to see AIB's such as MSI enable memory overclocking and possibly even over-volting with their famous triple over-voltage feature. The ability to overclock the memory might very well be unlockable through updates to 3rd party software as well such as MSI Afterburner. Although we have no doubts that enthusiast overclockers will be the first to HBM overclocking through BIOS modding.

At any rate, with half a terabyte/s of memory bandwidth as well as AMD's new compression engine introduced with Tonga, which significantly improves bandwidth utilization. We're looking at unprecedented levels of usable memory bandwidth. Still, it would be quite interesting to see how far HBM can be pushed and the performance improvement that would be attainable from doing so just as a healthy exercise of curiosity.

The AMD Radeon R9 Fury X will officially be available on-shelves on the 24th of June.