It has been almost 2 months since we first heard about the existence of the R9 Nano in a rumour. Very little was known about the card then except the its name. Now however, we have pretty much all the relevant info on the Nano sized Fiji offering. We have another nano sized update today from DGLee over at IYD.KR. The pictures of the surprisingly tiny but very powerful GPU are here for everyone to see - as well as performance numbers (official). 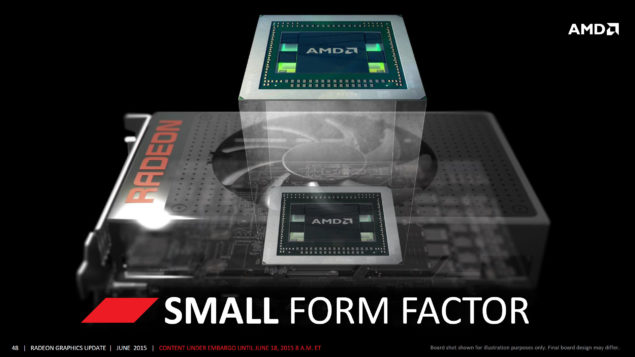 A slide from the AMD Press Deck. @AMD Public Domain

The R9  Fury X is tiny, at around 19 centimetres but the R9 Nano is well, nano, measuring in at only 15 centimetres. Its small form factor design would enable it to be fitted in the tiniest mini-iTX casings out there and its impressive efficiency would enable it to be remarkably powerful at the same time. The card rocks an allegedly full sized Fiji core with 4096 SPs. It is touted as being an efficiency monster with the same performance as the Radeon R9 290X but half the power draw. This is a remarkable card in any way you consider it and here is a good luck at the the shape of the card itself.

The card features a tiny heatsink (by GPU standards) and a lone single axial cooler. If the chip is indeed the full Fiji die then I would assume it is going to be clocked low for it to be efficient enough (and not overwhelm the modest heat dissipation equipment). Now that I have mentioned that, I cant help but wonder what would happen if someone were to mod onto it an after-market heatsink with double or tipple the heat dissipation capacity. Ofcourse, AMD has probably used cherry picked chips in the Fury Nano, so I wouldn't be surprised if its actually priced higher or near the Fury X (caution: opinion).

Its time for the benchmark and efficiency numbers provided by AMD. The benchmarking by AMD was conducted at rig rocking an i7-5960X (no CPU bottlenecking of any sort) and X99 setup with ample ram. The program used was the Unigine Heaven Benchmark at its 4K settings (3840x2160 resolution, Extreme present, 0xAA). Now we know the Fury Nano has a TDP of 175W and AMD has obligingly given the efficiency numbers for both cards.

The R9 Fury Nano has an efficiency of 0.152 fps/Watt at the above settings in this 4K benchmark, whileas the R9 290X has an efficiency of 0.076 fps. And 4 fps/inch whilst the R9 290X achieves a more modest 1.6fps/inch, which means the R9 Nano packs more than twice the punch of the 290X for its size. Simply multiplying the performance density by the length of the card we arrive at the actual score of the R9 Nano: 24.0 frames per second at a 4K benchmark - not bad at all. We have already dove deep into the gaming and compute performance figures for the R9 Nano in a previous piece to find out exactly how well the R9 Nano will stack against the GeForce competition and how it compares to AMD's high-end Radeon offerings like the R9 Fury X, Fury and R9 290X.

Ofcourse its worth noting that running a benchmark in 4K fully exploits the HBM capability of the Nano, so the efficiency difference might not be as high at lower resolutions where the HBM factor does not come into play. These are after all the official numbers, so it would be exceedingly unwise to take them without a grain of salt.

It is also worth noting that while the bandwidth of the R9 290X is 320GB/s it only has 2816 stream processors so the Bandwidth Per SP of the R9 290x is 0.1136 GB/s. On the other hand the Nano (if the rumors are true) has 4096 SPs with 512 GB/s bandwidth - the effective Bandwidth Per SP becomes 0.1250 GB/s. So when you take a look at the full picture, it isn't actually that huge of a difference as one might think at first glance. In a way the Fiji Core is not benefiting as much as it could from the HBM due to the fact that it has such a large number of cores. Needless to say, HBM2 should be quite a step up from the HBM1 used here.