During AMD's financial analyst day they made a bevy of great announcements, including on the mobile GPU front. What was missing, however, from the mobile release was the very top end. It seems that the M390X is just now becoming available, though specs are noticeably absent.

Alienware announces the availability of the R9 M390X in their laptop line, though no specs are available.

The slides that were shared during the mobile presentation hit upon the key points that are likely still applicable to the top end M390X, that the idea behind the new release was to provide refined efficiency and better power management. In other words AMD is simply using a more refined process for the same GPU's as before. 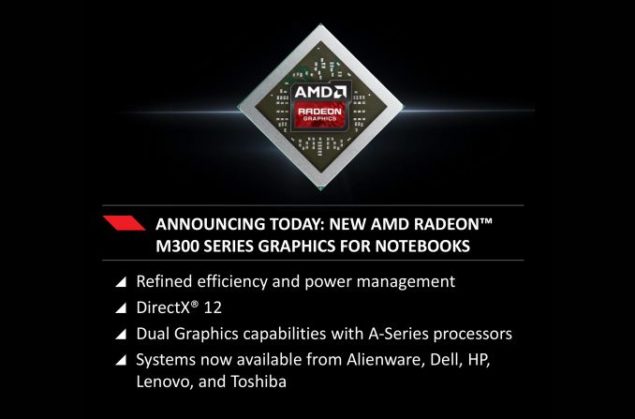 Without specs in hand we can only speculate as to what the M390X will actually be, and it isn't a stretch to assume that AMD has re-branded last years top-end M295X, based on Tonga, with perhaps a slightly higher boost clock speed. The M390X, then, is a more optimized M295X.

Each new mobile GPU announced during the financial analyst day was a re-badge merely with higher clock speeds and process improvements that enabled lower power consumption to increase the efficiency beyond earlier generations. Unfortunately this is in line with previous business practices that have continually left AMD's mobile GPU's wanting from a pure performance perspective.

We won't know what plans that AMD has for any Fiji based mobility products likely until after E3 and their official announcement of Fury and the 390X series at their special event. If they're indeed following the naming convention that we've reported, then we may well indeed see a mobile Fury joining us at some point in the future. the M390X is just a stop-gap until then.

Before the M295X their top end mobile GPU was actually a continuously renamed 7970M, based on Pitcairn, keeping their top spot for nearly two years as the 8970M and the M290X with only minor improvements.

Hopefully we get to see what's actually inside of the M390X soon. It should be available as an option, which means that it'll be in consumers hands before you know it. If you happen to receive a laptop that has the M390X, we would be ecstatic to have a GPU-Z shot from you.