AMD Prepping R9 Fury X2 In Time For The Holiday Season – But Can The Dual Fiji Radeon Flagship Deliver?

AMD is preparing its fastest graphics card yet, a dual GPU flagship based on the industry's first HBM GPU code named Fiji. The new premium Radeon graphics card is set for a Q4 launch, in time for the 2015 holiday season. AMD has not as of yet announced the commercial name that will be designated for this particular product, so we'll refer to it as the R9 Fury X2 in the time being to make it easier for everyone involved. 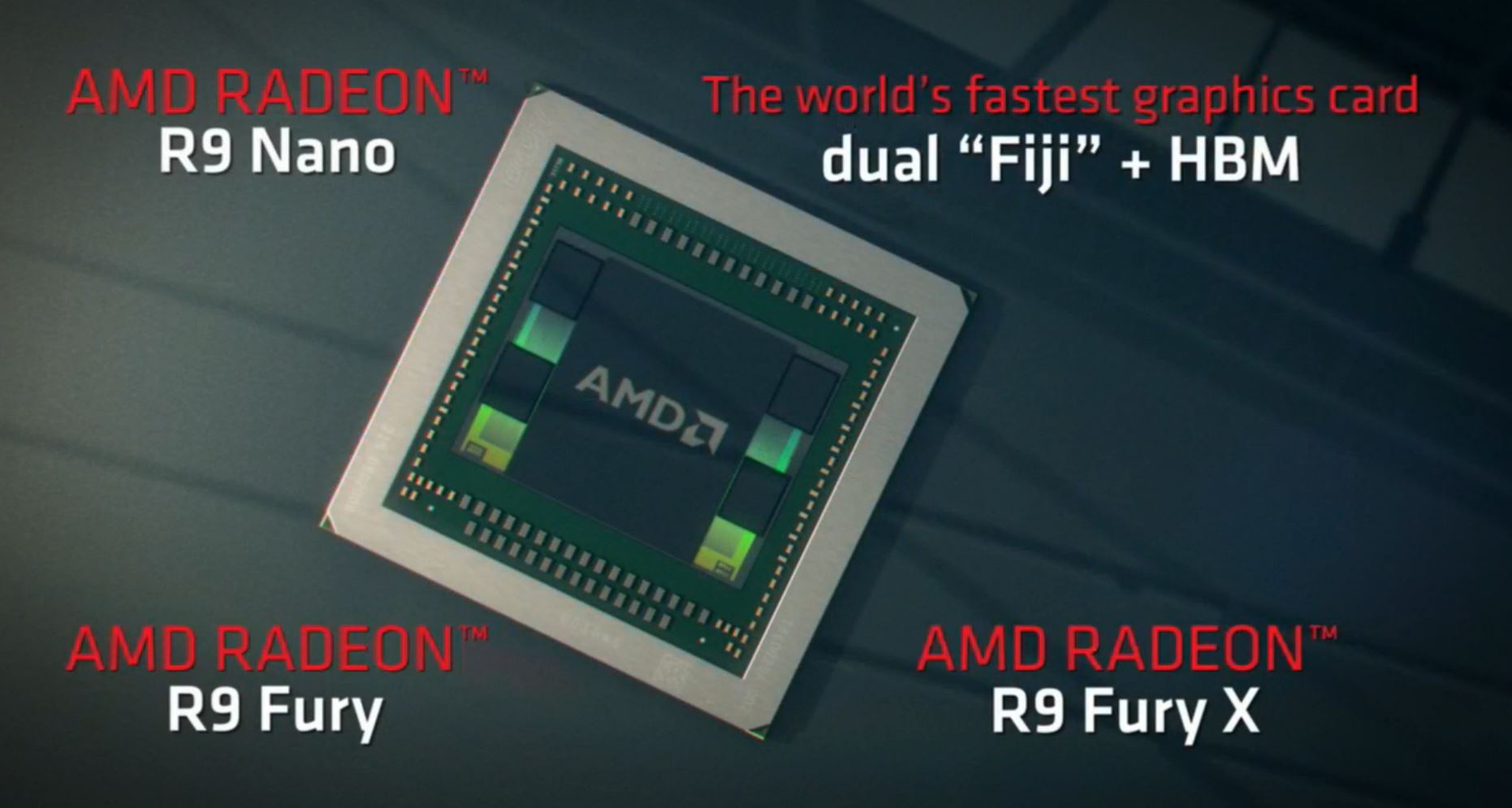 The R9 Fury X2 will be the fourth and last Fiji based graphics card from AMD this year. The card will feature two full fledged Fiji XT GPUs with 4GB of stacked High Bandwidth Memory each, for a total of 8GB of memory and a combined memory bandwidth of one Terabytes per second. The actual board design is pretty much finalized at this point. AMD engineers are purportedly hard at work optimizing for clock speeds, power and CrossfireX scaling.

This Is What 8GB Of HBM, 1TB/s Of Memory Bandwidth And 17+ Teraflops of Compute Look Like

These are all very impressive figures, but without effective multi-GPU scaling they don't mean much. And that begs the question, can the upcoming Radeon flagship deliver? AMD had already confirmed during Fiji's launch event at E3 this past June that the new flagship will be out in the fall of 2015, so it's not a question of when but how.

Well surprisingly that's not a difficult question to answer. Because despite having two GPUs on a single board, the graphics card will actually behave just like two separate R9 Fury X cards in a CrossfireX configuration. So all we really have to do to answer that question is look at how well a Fury X - or any Fiji based graphics card - does today in a CrossfireX configuration.

As it turns out the answer to the question can it deliver? is a resounding yes. Sadly however as we only have one Fury X in-house we weren't able to conduct our own testing. However thankfully we can turn to our good friends at Tweaktown.com who were among the first to publish CrossfireX results for the R9 Fury X. At 3840x2160, which is the resolution that we would reasonably expect gamers who'd spend $1300+ on a pair of graphics cards to play games at, two R9 Fury X cards in CrossfireX demonstrated a significant lead in average and/or minimum FPS in 6 out of 7 tested games against two GTX Titan X cards in SLI. Against two GTX 980 Ti graphics cards in SLI, two R9 Fury X cards were faster in all 7 tested titles at 4K.

At 2560x1440 it was a much closer race. The dual R9 Fury X setup comes out ahead in 3 out of 7 games, the dual Titan X setup comes out ahead in 3 other games and both setups come to a dead heat in one out of the seven tested titles. It might seem slightly peculiar at first that Fury X cards in CrossfireX are far more competitive with the Nvidia offerings than the same Fury X cards in single GPU setups. One 980 Ti will often outperform one Fury X at 2560x1440. And while it's a much closer race between the two cards at 4K, when it comes to multi GPU setups two Fury X cards will often lead two GTX 980 Ti cards in SLI. 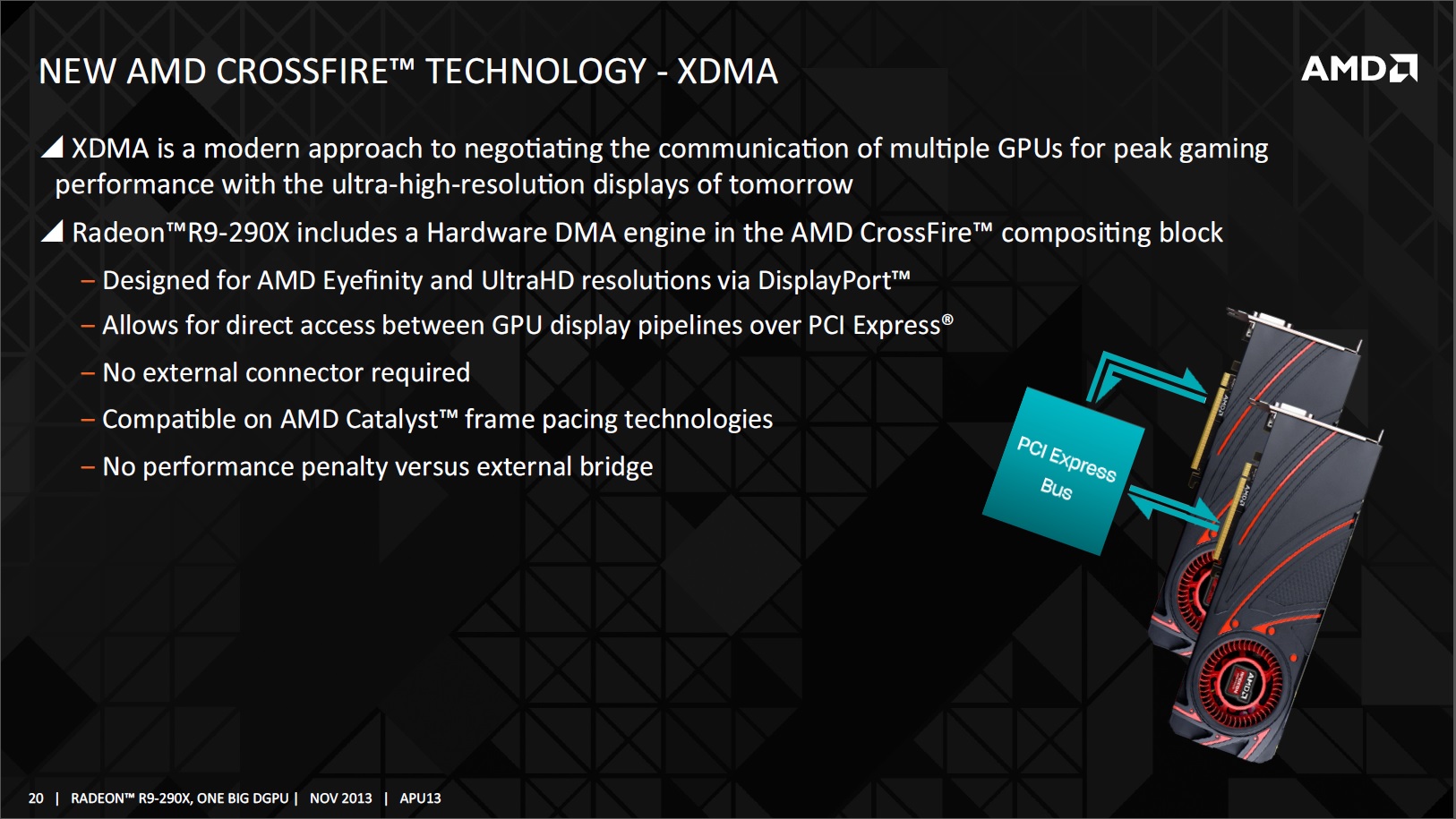 We've seen a similar trend with AMD's R9 290 series as well and it all comes down to AMD's CrossfireX DMA engine. It enables faster, lower overhead communication between multiple GPUs, this in turn translates to better CrossfireX scaling. And that's what we're seeing take effect here. It also enables GPUs inside multi-GPU setups to inter-communicate through the PCI Express interface which eliminates the need for a CrossfireX bridge.

While Nvidia's NV-Link technology is targeted towards a different market with very different workloads - mainly for enterprise and HPC applications - the concept itself requires that Nvidia's upcoming Pascal GPUs are built with the necessary hardware to enable this feature. The same hardware will allow Nvidia to deliver a similar solution to AMD's XDMA in consumer gaming applications. But until then, AMD's GCN 1.1 and later GPUs will continue to enjoy an advantage in multi-GPU scaling. An advantage that could allow AMD's R9 Fury X2 to succeed in securing the frequently sought after "world's fastest" title.