By Usman Pirzada
Jul 17, 2015 04:38 EDT
Share Tweet Submit
This is not investment advice. The author has no position in any of the stocks mentioned. WCCF TECH INC has a disclosure and ethics policy.

Advanced Micro Devices (NASDAQ: AMD) has posted its earnings for the second quarter of 2015. The company reported a loss of $181 million or $0.23 per share. In Q2 2014 last year, AMD had churned out an operating profit of $63 Million but net loss of $30 Million (or $0.05 per share). The company had previously adjusted its second quarter outlook thereby issuing a warning of decreased guidance. 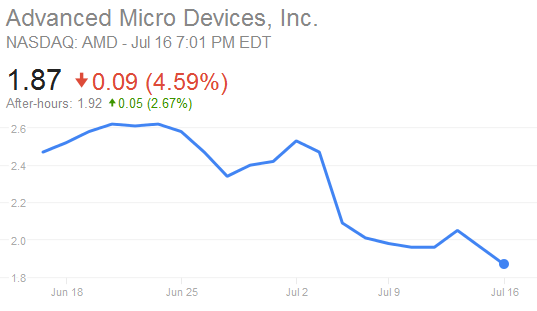 Share price history showing the effect of the updated outlook.

After the updated guidance, AMD's share price had crashed from $2.49 to $2.0. After the earnings report today, it is now currently at $1.87. From the updated Q2 2015 outlook to the earnings call today, this is a total decrease of approximately 23% in stock price - a very significant number. The EESC segment and channel business had experience growth but the dead wight that is the current states of AMD's (NASDAQ: AMD) compute side and the competition offered by Nvidia on the GPU side resulted in declining performance. Keep in mind that this particular earnings report does not bear the full brunt of revenue offered by the Fiji chip and is limited to the Hawaii side of things. Given below are the GAAP and Non-GAAP Financial Results for AMD for the Fiscal Second Quarter of 2015.

The company reported a revenue of $942 million, falling below the billion mark from Q2 2014 when the company reported revenue worth $1.44 Billion. Sequentially, this is a decrease of 8% form Q1 but an absolutely staggering decrease of 34% Year over Year. The decrease in APU sales and the charge ($33 Million) incurred by shifting to FinFETs is one of the major causes for the decrease (under accounting prudence, charges have to be accounted for in the period they are incurred).  Interestingly, the net loss and loss per share have remained more or less constant sequentially. The debt has also remained flat at $2.27 Billion from Q1.

AMD (NASDAQ: AMD) has seen a decrease of 29% from Q1 2015 and 54% Year over Year from Q2 2014 in the computing and graphics segment revenue. It's OEM business took a major hit, which is why we are seeing AMD shift a bit of focus to OEM products as well with the launch of the R9 300 series. The next quarter however should see a much more positive trend thanks to the GPU sales generated by the Fury chips and the new OEM lineup that AMD (NASDAQ: AMD) deployed. While the company would be hard pressed to make a turn around and report a profit, healthy growth is really all that matters right now. The PC Market is getting undoubtedly hard to play in, with a general trend shift to size shrink and niche shift.

AMD Captures 83% of the VR Market – Leading in the VR HMD Addressable Market with LiquidVR, Polaris and Other Collaborations