AMD has decided to push ahead with the development of its Mantle API. As we know, Mantle aims to reduce workload on the PC while running various games and applications. It does this by allowing developers to be able to directly access GPU, eliminating much of the workload put on the PC during execution. According to AMD, this eliminates the bottleneck created by the CPU during running of games and applications. The company has announced today that Mantle has entered a ''new phase of its development cycle''. 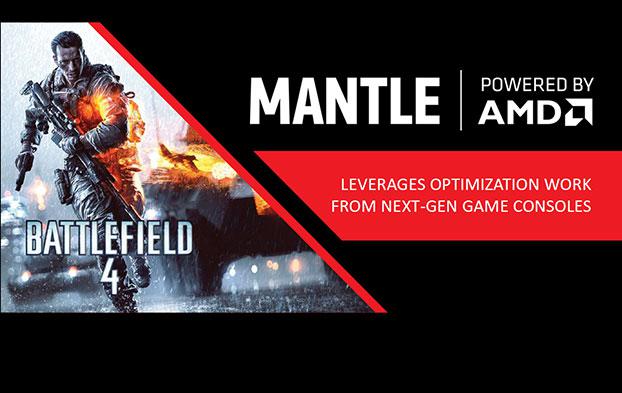 Mantle is currently in infant stages of development and so far has been implement only in two games released i.e. Thief and Battlefield 4. Furthermore, Microsoft's announcement at this year's GDC that the DirectX 12 would be very similar to Mantle did not result in any positive impressions for the API. With the announce of the Mantle beta software development kit, AMD clearly hopes to increase the numbers of developers following the API. This will give it much needed numbers before a final version is ready. AMD has been taking registrations since the last summit and is also signing on more developers, particularly for the Mantle beta currently. Until now, only the Mantle SDK (Software Development Kit) had been under alpha development. Furthermore, AMD had only granted access to a select number of developers. Presently, Mantle is also locked to AMD hardware only.

The release of Mantle beta (private) version is the first time the API is being made available to a relatively large amount of developers, since it's announcement in November 2013 at AMD's developer summit. “There are no objective criteria for being selected, as we are interested in talking to developers of all shapes and sizes,” the company said in a statement. Importance of prior experience in development was mentioned as well though. The beta release requires new developers to sign up with AMD. The Mantle developer portal, for developers wishing to utilize the Mantle beta, is up and running and can be accessed here. With its acceptance by developers and users alike, AMD clearly stands to benefit from sales of titles supporting Mantle. With the increase in numbers of titles, and Mantle offering significant performance enhancements, gamers will undoubtedly will have an incentive to choose AMD's hardware to outfit their PCs with.