The story of AMD’s Project Quantum is a unique one. It was the chip giant’s custom made, ultra short form factor PC which packed the strongest punch. One of the inherent design limitations however, was the fact that the SFF PC used an Intel Devil’s Canyon CPU since AMD counterparts have not offered serious competition in quite some time. Add that to the fact that it met some issues during production and the story appeared to have ended before it began. 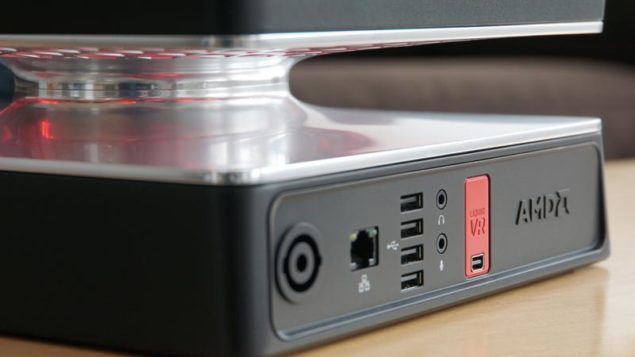 A closeup shot of Project Quantum highlighting its positioning towards VR.

The issues stemmed not only from the fact that the company was facing difficulty in volume production of the PC (which used many 3D printed parts and third party CNC water blocks by the way) but also because Investors were concerned about using a rival’s CPU inside an AMD branded product. Of course, as any tech enthusiast would tell you, combining a powerful dual GPU with an old AMD FX processor means bottlenecking the full capability of the GPU. Which is why the engineers over at AMD had to resort to using an Intel processor in Project Quantum.

“The interest we got immediately after E3 was very high, from journalists and consumers and OEM partners, I don’t know whether we have an OEM who is committed to building something like it. We built it as a concept PC, so like concept cars it’s not usually practical to take it straight to market, that wouldn’t make a great deal of sense. But it’s not far from that. I would think that if we have the right kind of conversations with some of these OEMs, then we might well turn it into a real product. In that case, it will probably be a very small number. Maybe only one or at most a handful of PC manufacturers who would bring that to market, potentially. It’s a custom piece, not a high volume piece, but it is a thing of beauty.” said AMD’s Richard Huddy to PCR

All that however, stands to change with the arrival of AMD’s Zen processors. It was previously thought that Project Quantum is dead. Because according to a recent report by the publication Diit.cz, the project isn’t dead but simply shelved till a more opportune moment arrives. AMD postponed Project Quantum for two major reasons:

Things will change with the arrival of AMD’s high performance x86 architecture: Zen. Not only is the uArch fully capable of handling high performance loads it is expected to offer competition to Intel counterparts. Add that to the fact that AMD could swap in a 14nm FinFET based Vega GPU and you have yourself one hell of a killer combo – and one that is pure AMD for that matter. Swapping in a Vega GPU would also mean that it would utilize the latest display connectors such as DisplayPort 1.3 and HDMI 2.0, not to mention would align it fully with the new market of VR.

We have Quantum designs that feature both AMD and Intel processors, so we can fully address the entire market. I’m sure you’ve heard AMD leaders speak before about how we’re driving growth in the company and our key businesses, and that one of the key strategies we have for doing that is listening to customers.

You may have heard at the recent AMD financial analyst day that Lisa Su described Job #1 as “Build Great Products.” In the case of buyers for systems like Project Quantum, there is a clear preference for choice; they’re not interested in a narrow range of computing solutions – they want to pick and choose the balance of components that they want, that are hand-tailored in a world of off-the-rack-suits. (AMD)

If Project Quantum retains its original premise however, the design will be fully configurable. The device is perfectly positioned to fight it out (and win) against inferior Steam Machine designs, which will not be able to pack as much graphical performance per cm³ as a fully tricked out Project Quantum. VR headsets also require an incredible amount of horsepower and play very well with dual GPU configurations - which is another strength of Quantum over a conventional single GPU Steam Machine. In any case, the real issue would be selling the idea to AIBs, which were not very keen from what we have heard from AMD.