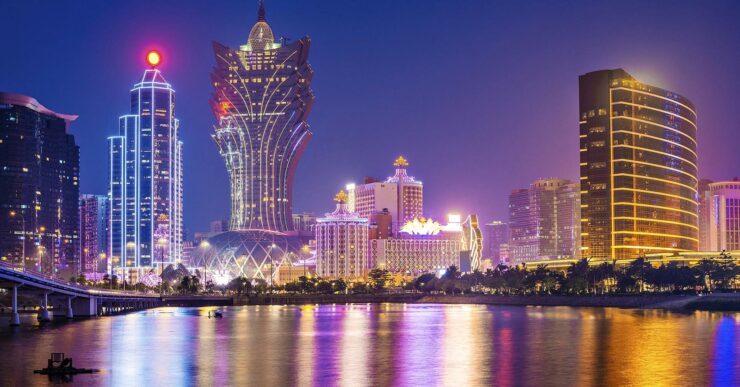 AMD is hosting a big press conference later this month to unveil their highly efficient Polaris 10 and Polaris 11 graphics cards. The latest information reveals that AMD is going to fire back at NVIDIA with the announcement of their own FinFET based GPUs which will deliver up to 2 times the performance per watt improvement and a range of architectural upgrades to deliver the most competitive solutions to gamers.

AMD will hold a special event to launch their Radeon 400 series GPUs in Macau later this month.

AMD's Polaris GPU architecture was revealed in late 2015. Based on the latest GCN 4.0 design, Polaris is meant to take the efficiency on Radeon cards to the next level with up to two times the performance per watt. Polaris GPUs will be available in two variants, the lower end Polaris 11 and the higher end Polaris 10.  Polaris 11 is built for laptops and entry level desktop cards while Polaris 10 will be aiming for the mainstream desktops and high-end mobility platforms. 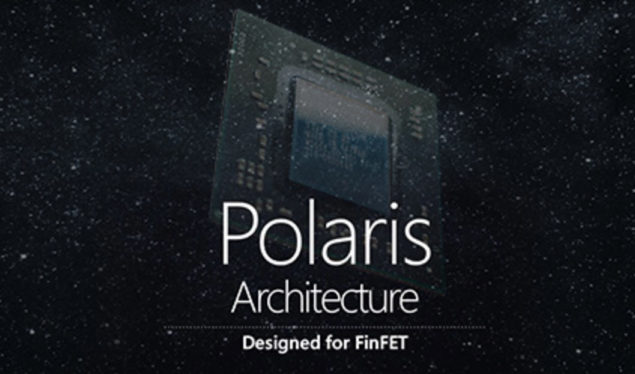 AMD previously stated that Polaris GPUs will be available in mid of 2016 but we now we know when AMD plans to unveil their latest cards. According to Zolkorn, AMD will be hosting a special press conference at the end of this month. The press conference will be held in Macau "Las Vegas of Asia" and AMD will invite several editors from around the globe to cover the event. The reason to be holding a press conference in Macau could be due to Computex being right around the corner and AMD might have been unable to arrange a grand event in Taipei so they chose Macau instead. 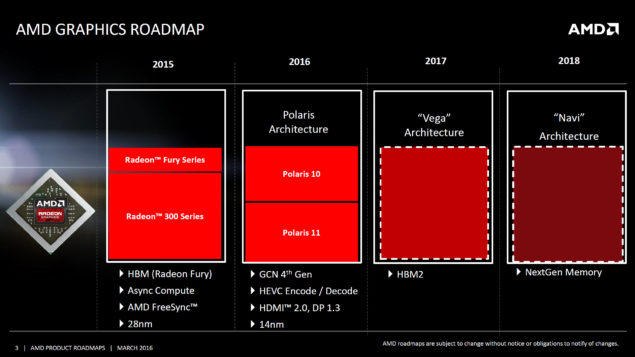 Regardless, the event will take place between 26th - 29th May. AMD will be officially announcing their next-gen Polaris based graphics cards. These will include products based on both Polaris 10 and Polaris 11 chips. It's not surprising that AMD is hosting this event just a few days after the NVIDIA GeForce GTX 1080 will be available to public. It is not confirmed whether AMD will paper launch their graphics cards at this date but knowing that the NVIDIA cards will already be out in the market, AMD will definitely be aiming for a full retail launch.

The AMD Polaris 10 GPU is known to be the flagship chip based on the GCN 4.0 architecture. The Polaris 10 will remain the flagship until Vega arrives which is launching in 2017. AMD demoed a Polaris 10 based graphics card at Capsaicin 2016 in Hitman running in DirectX 12 at 1440P resolution and delivering a steady 60 FPS. Polaris 10 sounds like a replacement to the Fury X but in fact, it is replacing the mainstream lineup. 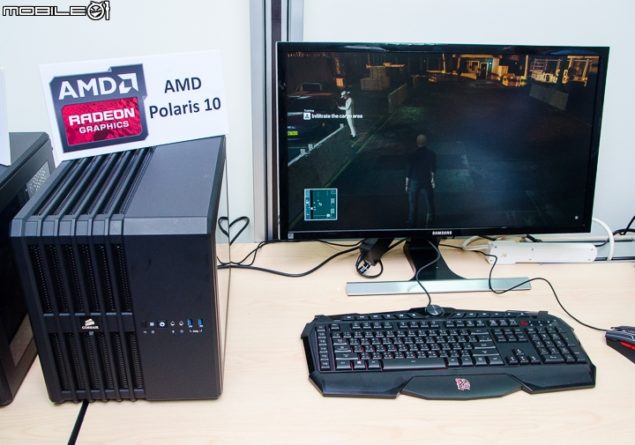 AMD's Polaris 10 GPUs are built for DirectX 12 and VR Gaming with an attractive price point.

According to AMD, the Radeon R9 Fury series cards are enthusiast grade products. Everything below them that includes the Radeon R9 390 and Radeon R9 380 series are mainstream cards. AMD will be filling this market to dispose off their older cores and replace them with new power efficient products. We know that Polaris 10 will either be the Radeon R9 490 or the Radeon R9 480 series but we can’t be so sure as this information is still part of a rumor.

AMD confirmed that Polaris 10 is aimed at both mainstream desktop products and high-end notebook products which means that this chip is quite fast. The Polaris 10 could be similar to NVIDIA’s GM204 which serves both, a high-end mobility lineup and the mainstream desktop lineup while staying competitive in terms of performance and efficiency.

The AMD Polaris 11 was demoed back at CES 2016 and we have since known this as the baby Polaris chip. The chip is small but is extremely efficient against current gen cards from AMD and NVIDIA. AMD has already shown the Polaris 11 GPU to journalists and demoed it against a GeForce GTX 950 to showcase a 50W difference in the 14nm and 28nm process technologies. 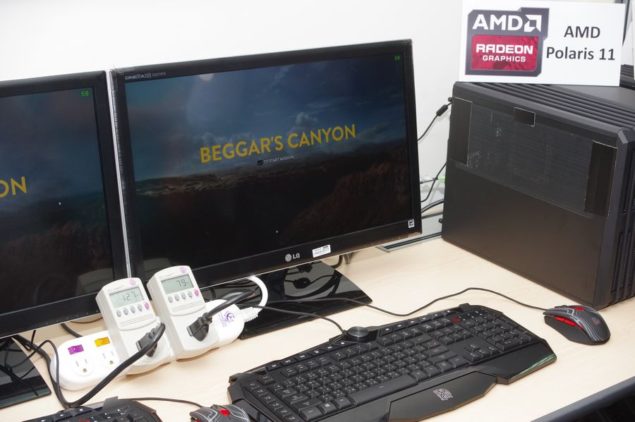 Polaris 11 is AMD's most efficient GPU to date, will power low-power, high-performance laptops.

The AMD Polaris 11 GPU however is said to be aimed at the notebook market. The chip is said to have wattage under 50W so it makes sense to include this in laptops as its efficiency and performance stats will prove great but this also means that we may or may not see a desktop graphics card based on Polaris 11 for a while or one at all. Right now, according to the official statement from AMD, Polaris 11 seems to be a mobility focused GPU.

AMD Radeon 400 GPUs Aim To Expand The Install Base of VR PCs - Affordable and Efficient GPU Design For Everyone!

In an interview with Arstechnica, Roy Taylor (AMD’s Corporate Vice President) confirmed that Polaris will be a mainstream GPU and not a high-end. In fact, this is a good thing considering AMD’s most successful GPU in the Radeon 300 series has been their Radeon R9 390 series which is a $329 US product. NVIDIA also reported huge success with their GeForce GTX 970 that is also a $329 US product. AMD is specifically targeting the mainstream audience with their Polaris 10 and Polaris 11 GPUs and before we proceed onward, you should read what Roy had to say about Polaris: 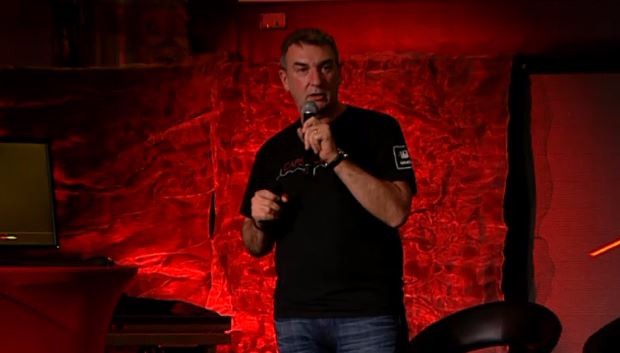 “The reason Polaris is a big deal, is because I believe we will be able to grow that TAM [total addressable market] significantly,” said Taylor.

“If you look at the total install base of a Radeon 290, or a GTX 970, or above, it’s 7.5 million units. But the issue is that if a publisher wants to sell a £40/$50 game, that’s not a big enough market to justify that yet. We’ve got to prime the pumps, which means somebody has got to start writing cheques to big games publishers. Or we’ve got to increase the install TAM.” via Arstechnica 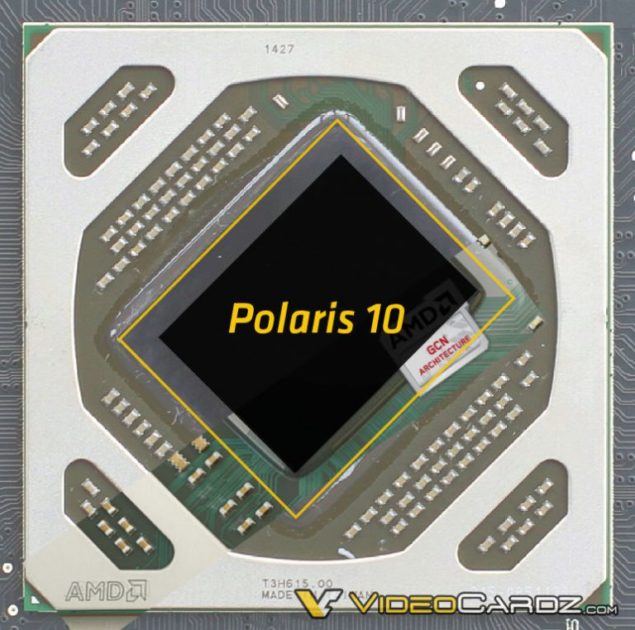 A recreation of the AMD Polaris 10 GPU die by Videocardz shows chip smaller than Tonga XT.

We expect to learn more information on the specific Radeon 400 series graphics cards that utilize the brand new Polaris architecture later this month. Stay tuned for the latest info on AMD's Polaris GPUs!