AMD's upcoming Piledriver based Opteron processors have been detailed which would be aimed towards the enterprise and workstation platforms.

AMD's Opteron processors based on the Piledriver architecture would be branded as the Opteron 4300 and Opteron 6300 series. The Opteron 6300 series lineup has a total of 9 CPUs which have been detailed featuring 4 to 16 Cores. The TDP on the several chips ranges from 85W/115W/140W. Due to higher core count and to keep thermal specs under limit, the 16 core chips are limited to lower frequencies of 1.8 GHz for the 85W part and 2.3-2.5 GHz for the 115W parts. The fastest 140W Opteron 6386 SE processor would run at 2.8 GHz with each processor having a 16 MB L3 Cache.

The Four core Opteron 6308 is the fastest clocked chip running at 3.5 GHz while having a TDP of 115W whereas the eight core and twelve core chips with 115W TDP run at frequencies ranging from 2.6 - 3.2 GHz. The launch of Opteron processors would most likely be held during the AMD SC12 conference at the Salt Palace Convention Center in Salt Lake City, Utah from November 12-15. AMD is also said to detail its latest FirePro Series graphics card based on the new 28nm Graphics Core Next GPU. 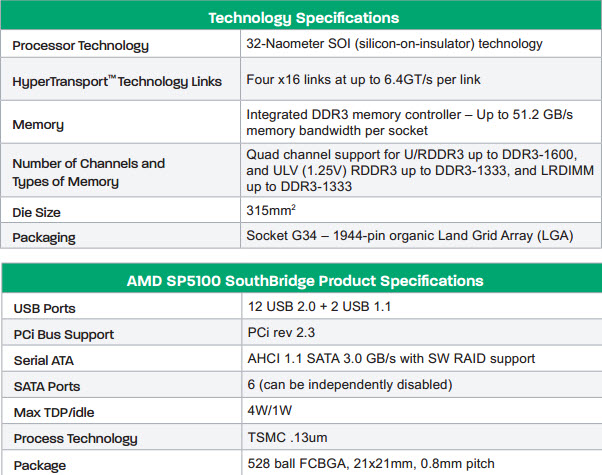