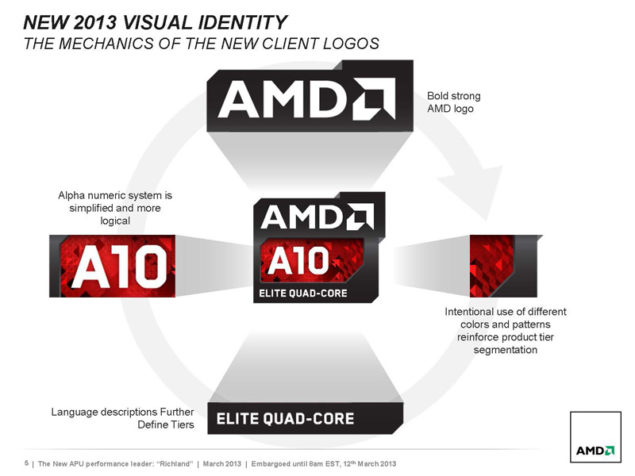 The Richland A-Series Mobile APU lineup from AMD consist of four Elite A-Series model with base TDP of 35W, these are aimed towards performance notebooks and are listed below:

"The high performance AMD A-Series APU continues to impress with its ability to deliver stunning graphics and immersive experiences with even more battery life. Our engineers have done a superb job of increasing processor performance while decreasing power consumption," said Bernd Lienhard, corporate vice president and general manager of AMD's Client Business Unit. "With the capabilities built into our 2013 AMD Elite A-Series APUs, including new software for gesture control, facial recognition, rich entertainment and more lifelike gaming, we are delivering an ever richer experience to end users and our customers." via AMD 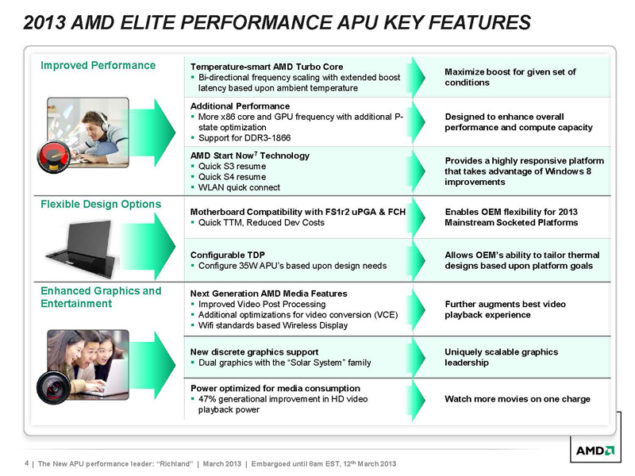 Notebooks which would be equipped with the Richland A-Series Mobile APUs would be pre-loaded with these new features while they would also be available for users to download via AMD's website when made available next month. 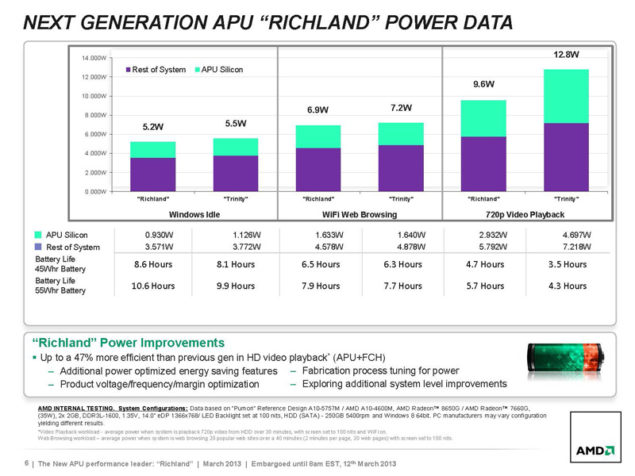 AMD on the technical front have developed their new boost technology which delivers much more efficiency compared to Trinity APUs. What the new boost technology does is dynamically set CPU and GPU power during idle and load conditions. Suppose you load an app where CPU is more prioritized, the boost technology would decrease the GPU power so you can achieve faster clock speeds with the CPU, if an applications puts more load on the GPU than the CPU power would be dynamically decreased to an extent that it conserves power than wasting it. With the added features, the Richland A-Series Mobile APUs feature 47% more power efficiency compared to Trinity.

Similarly, due to new HD 8000 integrated GPUs which feature DX11.1 support, AMD has now achieved a 50% performance leap compared to Intel's Core i7 "Ivy Bridge" Mobile CPUs. The new iGPU is based on the VLIW4 architecture but allows Dual GPU support with AMD's HD 7000 series discrete GPUs based on the Southern Islands architecture. AMD's APUs have always been faster on the GPU side however Intel Haswell's iGPU is said to change the game when it arrives. The Richland A-Series Mobile APUs start shipping next month, AMD is also expected to launch their Richland A-Series desktop lineup with in the upcoming weeks. 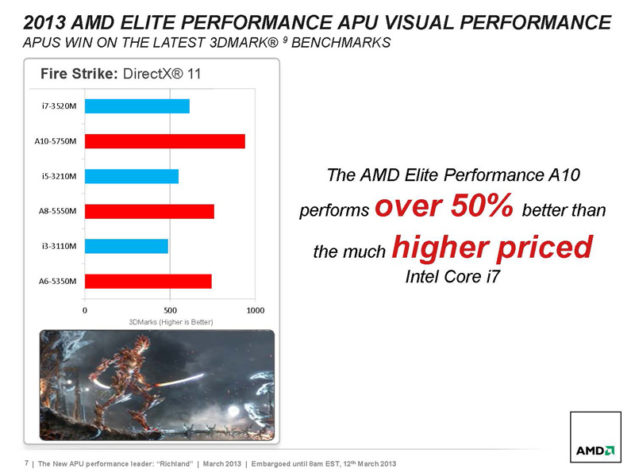 AMD won't stop updating the APU platform just yet, in late 2013 the company is expected to launch their fourth generation Kaveri APU which would pack Steamroller and GCN 2.0 goodness along with HSA enhancements. Their Kabini and Temash Low power SOC chips are also expected to arrive within Q2 2013.