AMD officially announced details of its next generation APU 'Kaveri' this January. The APUs were to be dubbed as A10/A8/A6/A4-7000 series and will replace the current A10/A8/A6/A4-6000 series ‘Richland’ APUs. The Kaveri is to feature GCN core architecture, a new 28nm Streamroller core and further HSA enhancements. In addition, the next gen AP was to stick to desktops primarily. Well, an AMD Kaveri has been spotted in the wild through the courtesy of our friends at CPUworld and you're all in for a surprise. The processor spotted has been seen as a part of a HP laptop. 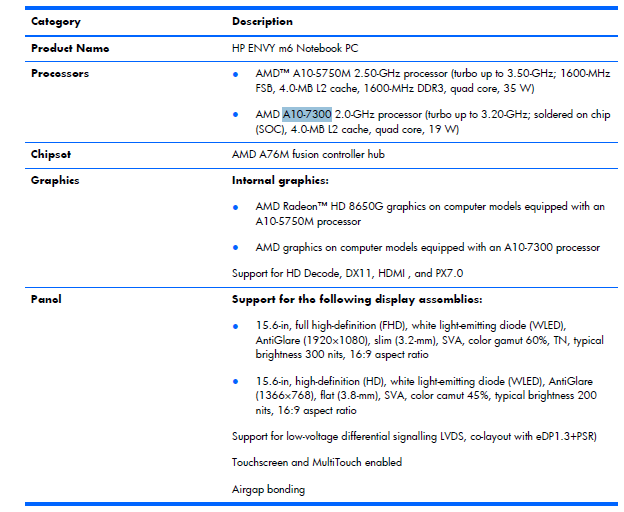 Kaveri Spotted Dubbed 'AMD A10-7300'. Found in The Maintenance and Specification Guide of HP's ENVY M6.

The Kaveri APU, dubbed as 'AMD A10-7300' has been located in the manual for the HP Envy M6. The guide states the A10-7300 to have 4 CPU cores and a L2 Cache of 4mb. Frequency of the processor is mentioned to be 2.0 GHz, with a turbo of up to 3.20 GHz. TDP level of the APU is at 19 Watts. This is quite satisfactory when compared to today's laptop computers. The graphics subsystem on this SKU remains unspecified at the moment. Considering the details of the processor in terms of TDP and performance, several important observations and conclusions can be made. The low TDP of 19 Watts significantly increases the 'PPW' or the 'Performance per Watt' of the APU. AMD's current low power variant, the Richland has frequency capabilities of 2.1 GHz with a boost frequency of 2.9 GHz.

Coming towards the GPU specifications, we can only guess as to what the APU will entail. AMD is known to reduce core clocks and have a higher core count. This is done to save energy. Its current 19 Watt Richland core, the A10-5545M features 384 cores with clocks ranging from 450 - 554 Mhz. So we should expect the next generation Kaveri to at least top this, and have more than 384 cores with higher clocks. As to how successful this new generation of mobile APU will be, we can only guess. However it does seem to be much better than its predecessors. The performance of integrated GPUs is also increasing, and with high performing GPUs as a strong point, AMD can surely be expected to give stiff competition to its competitors. Kaveri mobile processors are expected to hit the market by the end of the current quarter. They will come unsoldered to constitute for space savings and thickness reduction.