It seems that Mantle API causes foggy and washed out graphics in Battlefield 4. The reason you haven't noticed this before is because so far the only thing affected by the glitch is the sky box and background elements.

Before we proceed i think its worth mentioning here that Mantle is in its infancey and there are bound to be bugs here and there. Currently the only elements that are affected by this problem are the Sky and the Mountains and Faraway Terrain. Observe the two images below, both screenshots from Battlefield 4. The first one is from DirectX and the second from Mantle. 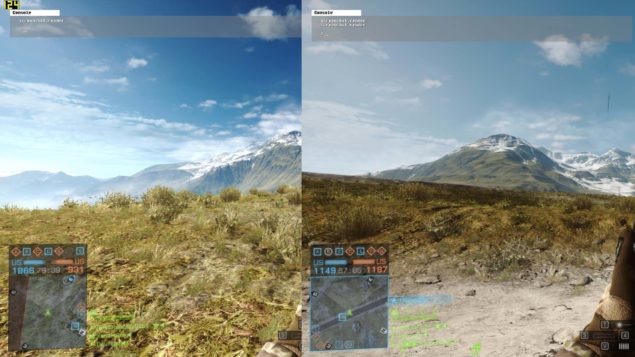 As you can see the colors are washed out and the mountain detail is greyed out as well. From what I can see this appears to be a very simple Post Processing glitch. Not something to be worried about. Infact it seems that AMD has already taken notice of it and its being patched out as we speak. Ofcourse a post processing tweak has no effects on numbers. Nothing else appears to be affected as far as anyone can see. The textures and near-objects all look about the same in both Direct X and Mantle.

@TheMattB81 it is a bug on our side, we'll fix it, doesn't affect performance

It is possible that user might face issues in other games also with the Mantle API as compared to Direct X, but that is only to be expected from any new piece of code. Some users have complained of the Star Swarm Demo crashing and similarly AMD is already on it. Wait till Mantle's Drivers come out of beta and then get your pitchforks ready.

Currently #AMD Mantle Causes Washed Out Graphics in B4 Versus Direct X. http://t.co/tO9vFc5ycL