A Russian site 3dnews.ru has leaked performance estimates of AMD's upcoming Llano Fusion APU's (Accelerated Processing Units) in 3D Mark Vantage Benchmark. The Llano Fusion A-Series Mobile Processors will be launched on Computex 2011 which will be held within a few days. Although rumors tell the launch might be delayed till July but its highly likely for E3/Computex launch as AMD official confirmed that they don't plan to change their public roadmap for bulldozer and Fusion here.

Three Llano Fusion and a single Brazos based APU was used in the test. You can check out the graphs below for specs on the APU's used:

The 3D Mark Vantage benchmark shows that all of the A-Series embedded Radeon chips performed faster than the Geforce 9600M GT chip which is considered a faster mobile graphics solution while the A8-3510MX radeon chip (HD6620G) was even faster than the GT240M Geforce chip. As compared to Mobility Radeon chips from 46** and 56** series, The performance of the APU's was quite satisfactory. The E-350 however didn't performed upto an exceptional level with a score of only 670 3D Marks slower than every other mobility chip. 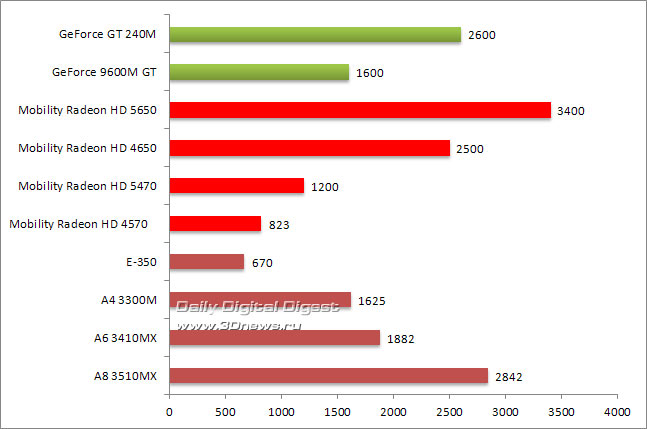 The Accelerated Processing Units are sure faster in terms of graphical performance due to their embedded Radeon chips but CPU Core performance is also a major factor which should be considered. We also reported other benchmarks performed on Llano Fusion chips below: