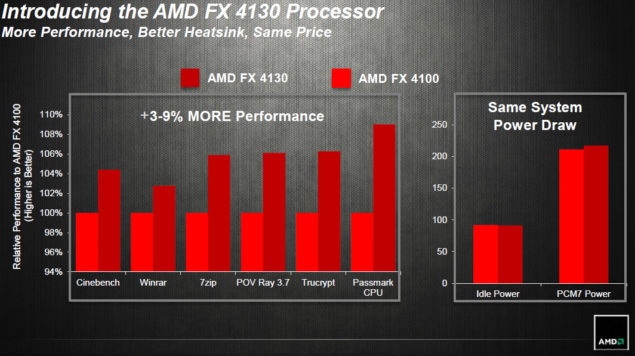 The Quad Core FX-4130 based on the x86 Piledriver architecture is clocked at 3.8 GHz base and 3.9 GHz Turbo Core clock speed. Each core is associated with 2 MB of L3 cache giving the chip a total of 8 MB cache, a unlocked design offers better overclocking and supports the latest instruction set which includes AVX, AES and FMX. The FX-4130 has a rated TDP of 125W but consumes the same amount of power as its predecessor "FX-4100" due to the much efficient Piledriver core architecture.

Speaking of the FX-4100, the latest Vishera FX-4130 delivers upto 9% better performance over its predecessor and 22% better performance over the similarly priced Core i3-2100 processor. The unlocked "K" design allows overclocking on the chip with which users can boost the clock speeds upto 5 GHz considering the chip comes with a newly refined heatsink package. The FX-4130 is AM3+ compatible (990FX/990X/970 chipsets).

The FX-4130 comes at a retail price of $101 US which is a considerable price for an unlocked quad core based on the latest Piledriver architecture.