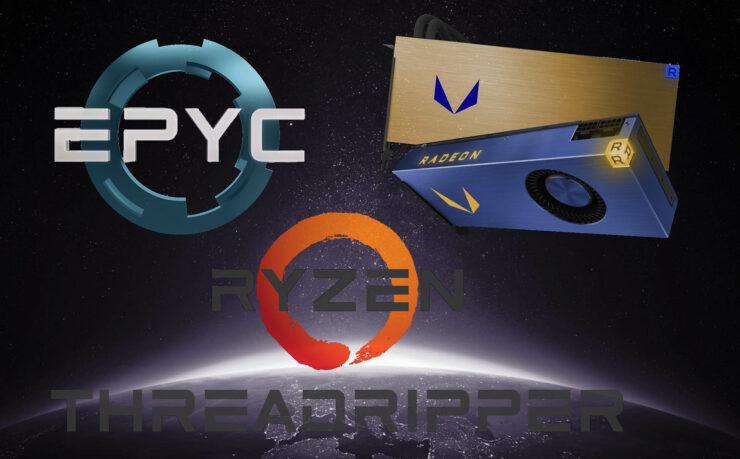 The newly acquired trademarks include RX Vega, Threadripper, Epyc, Kyzen, Aragon, Pharos, Promethean, Zenso & CoreAmp. Interestingly all of these trademarks were filed around the same time in March and at least three of them have been announced as products in May. AMD also filed for the Ryzen trademark just a couple of months before it announced the Ryzen brand. So we're looking at a fairly consistent pattern here which could mean that we'll see even more of these trademarks announced as products over the next couple of months.

Let's start with the products that were actually announced, Threadripper & EPYC. Both of these product names were trademarked in March and we now know they're AMD's new high end desktop and server processor brands. Moving on to the mystery code names, we have Kyzen, a name that sounds eerily similar to Ryzen. It appears to be a brand for an upcoming processor as it was filed under the same categories as Ryzen.

CoreAmp sounds like a name AMD would give to an overclocking feature or utility. We might learn more about CoreAmp after Threadripper and Vega are released. Now, Promethean sounds like the code name that AMD might have given to its upcoming high-end chipset for Threadripper processors. We know AMD loves code names derived from Greek mythology, Ryzen's chipset was code named Promontory. Which makes Promethean a likely candidate for the company's upcoming chipset.

Pharos and Aragon do not give off the impression that they're brands, rather internal code names for AMD technologies. These could be code names for on-chip technologies that AMD is working on for upcoming products.  Finally we have Zenso, which is actually the name of the circular Zen logo that AMD has used for Ryzen.  Anyway you slice it these new code names sound fascinating and we can't wait to know what they could end up as. Tell us what you think these code names could be for in the comments below!