It goes without saying that a True APU would have a perfect 50 - 50 distribution of power and core area on the die, though further specialized versions can be made depending on requirement (More CPU, More GPU etc). AMD's Kaveri is the processor currently closest to the 50% mark that defines a true apu. Heres a comparison of Kaveri with Intel Haswell, Ivy Bridge and Sandy Bridge Respectively. 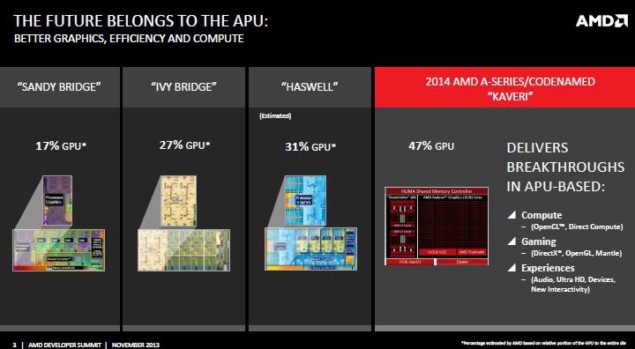 We can see that even though Intel's CPU to GPU Ratio has increased it remains significantly less than AMD's APUS. Although ofcouse the actual efficiency of the core area reserved for GPU matters as well. Richland had about 42% core area reserved for the GPU. And Kaveri proves that APUs have come a long way. Add it to the fact that Kaveri is the first Heterogeneous APU about and you have got yourself a sure fire. The actual architectural analsysis between Llano, Trinity and Kaveri is also here:

Architecture wise, Kaveri has undergone massive changes from GCN (Graphic Core Next) and Heterogeneous System Architecture based design to Compute Units. Kaveri is nothing less than a revolution in APUs but ofcourse the realistic question remains the same, will APUs ever be considered by serious gamers?