At CES 2014, AMD showcased several slides regarding the next generation Kaveri APU detailing its architecture, specifications and prices. The Kaveri APU lineup will be available to consumers in 2014 featuring the latest GCN and Steamroller architecture which would be unified with HUMA to deliver faster compute performance to end users. 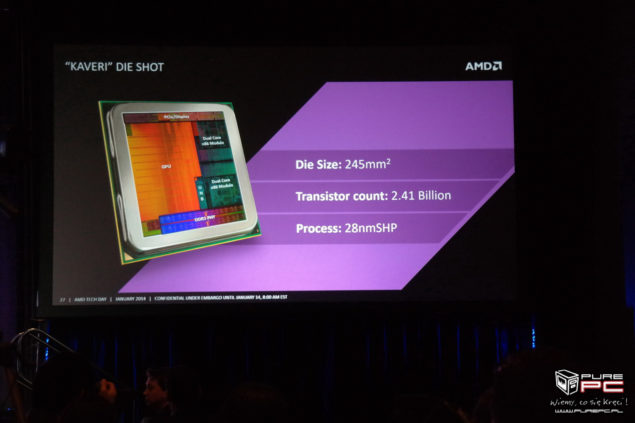 The biggest architectural change Kaveri APU features is the use of the latest 28nm Steamroller architecture that is a true multi-threaded architecture focusing on enhancing the IPC (Instruction-Per-Cycle) by upto 20%. In each module, two separate threads are provided with their own parallel instruction decoder, due to enhancements, the Kaveri APU die measures at 245mm2 with 2.41 Billion transistors crammed inside the die. The Kaveri APU is built upon the 28nm SHP. Steamroller is a completely new architecture hence there are improvements across the board which can be seen in the slides at the end of this article.

The most significant enhancement Kaveri would adopt is the HSA (Heterogeneous System Architecture) powered with the new HUMA enhancements which allow coherent memory access within the GPU and CPU. HUMA would make sure that both the CPU and GPU would have uniform access to an entire memory space which would be done through the memory controller. This would allow additional performance out of the APU incase the GPU gets bandwidth starved. This also suggests that faster memory speeds would result in better overall performance from the graphics card. Now with all the architectural talks done, let’s get on with the A10-7850K itself.

On the graphics side, we are getting the latest GCN architecture over the VLIW4 featured on previous AMD APUs. The die has upto 8 GCN compute units which feature AMD AudioTrue technology, AMD Eyefinity tech, UVD, VCE, DMA Engine and the addition of coherent shared unified memory. Being based on the same GPU as Hawaii, the Kaveri APU die has 8 ACE (Asynchronous Compute Engine) which can manage 8 Queues and have access to L2 Cache and GDS . 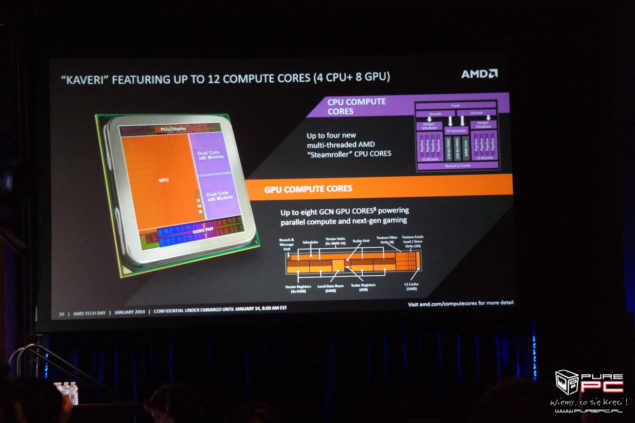 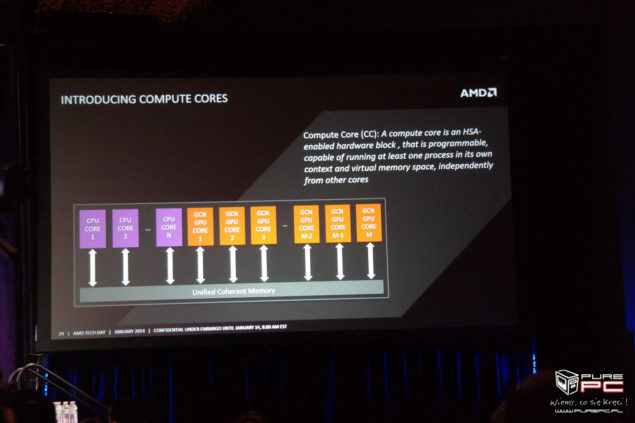 A compute core is an HSA enabled hardware block, that is programmable, capable of running atleast one process on its own context and virtual memory space, independently from other cores.

The Compute cores would be directly connected to a unified coherent memory. 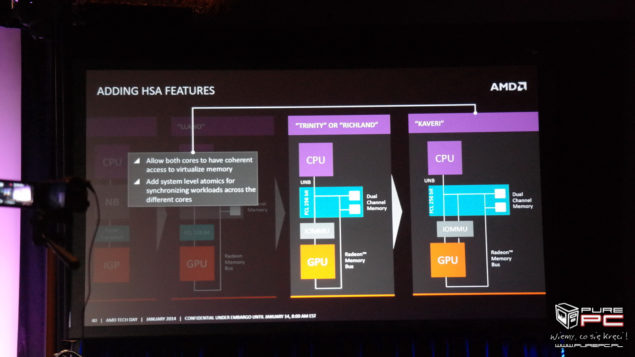 On with the specifications, the A10-7850K as expected would remain the flagship Kaveri APU of 2014 boasting 4 Steamroller cores, 4 MB L2 Cache and clock speeds of 3.7 GHz base and 4.0 GHz turbo. On the graphics side, the APU would feature 8 Compute Units resulting in 512 stream processors clocked at 654 MHz base and 720 MHz in boost. The APU is fully unlocked allowing users to overclock the chip past the limits and supports DDR3-2133 MHz and comes in a 95W TDP package. The A10-7850K would cost $173 US officially.

The A8-7600 would be the last quad core variant in the Kaveri APU lineup featuring 3.1 GHz base and 3.8 GHz turbo frequencies with 4 MB L2 cache, 65W TDP and DDR3-2133 MHz support. The graphics side would include 384 Stream processors (6 Compute Units) and a core speed of 654 MHz base and 720 MHz boost. The APU would cost $119 US at launch. Specifications for the entire lineup can be seen here. 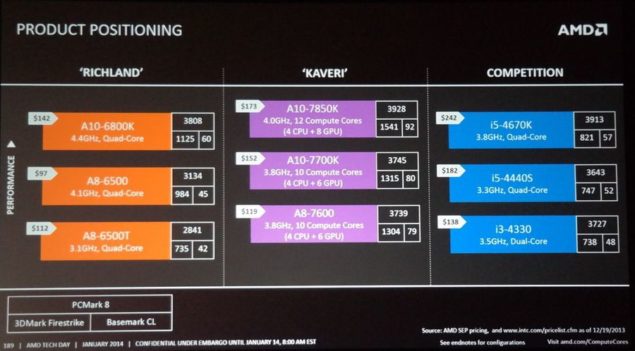 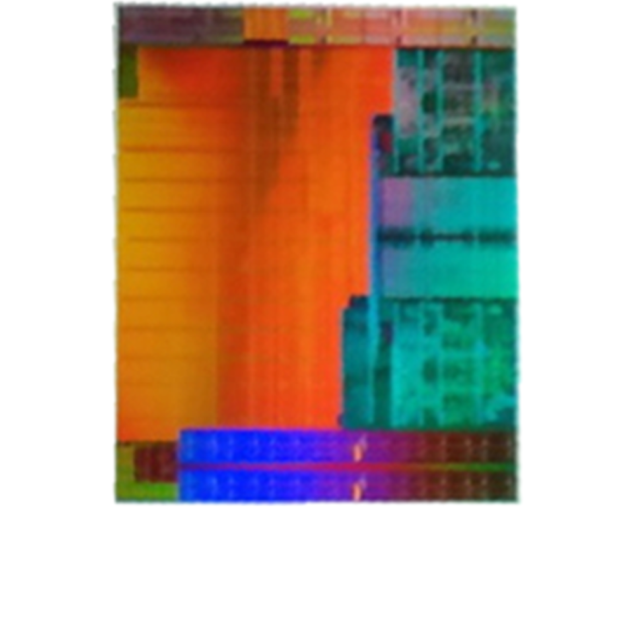 Following images are courtesy of PurePC! 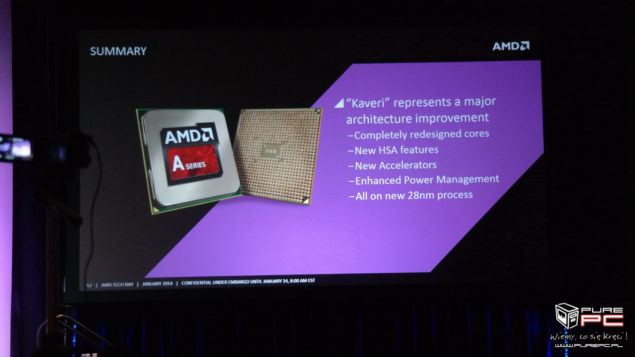 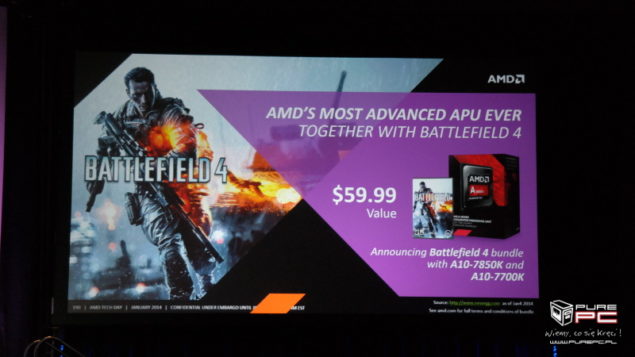 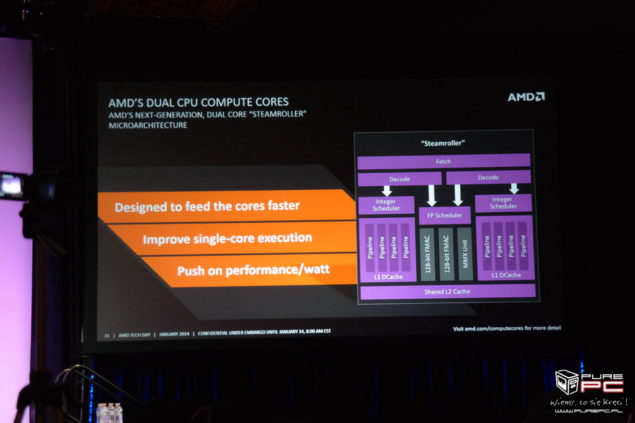 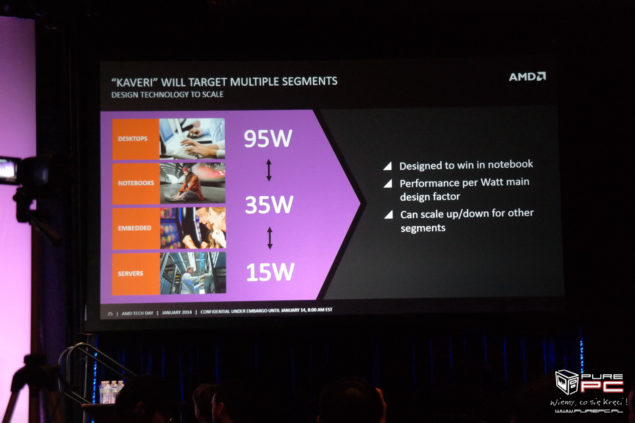 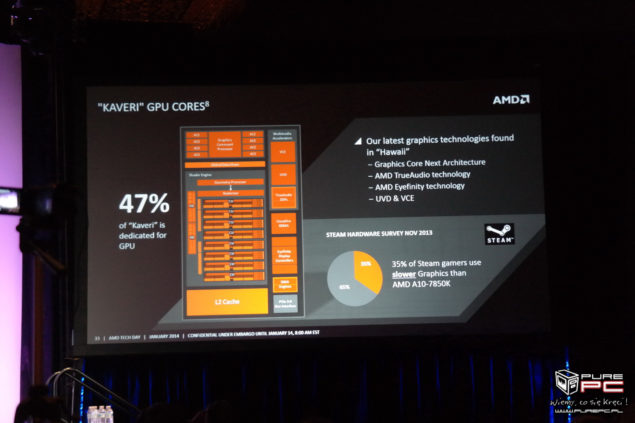 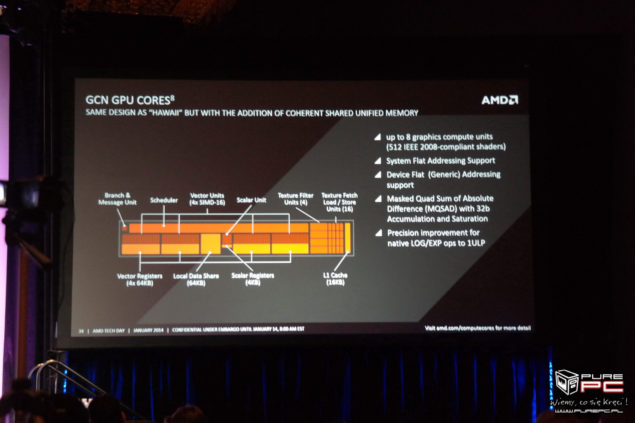 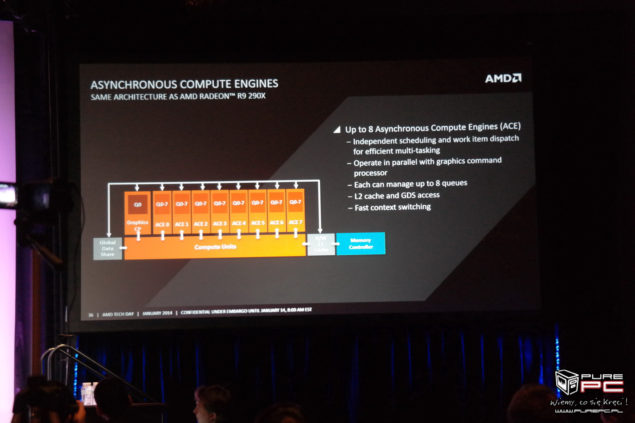 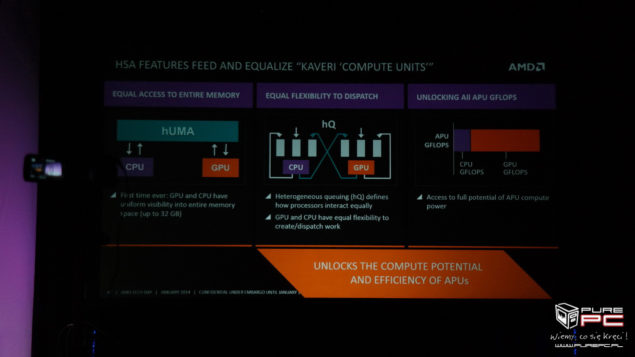 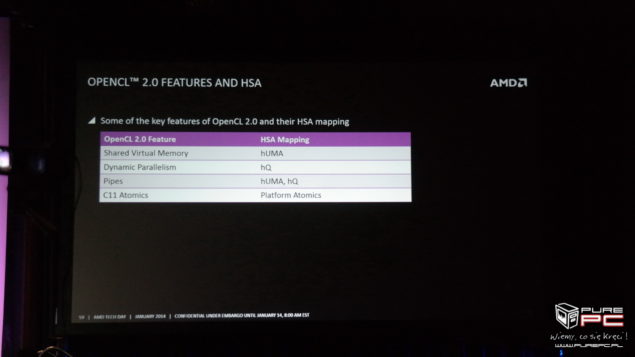 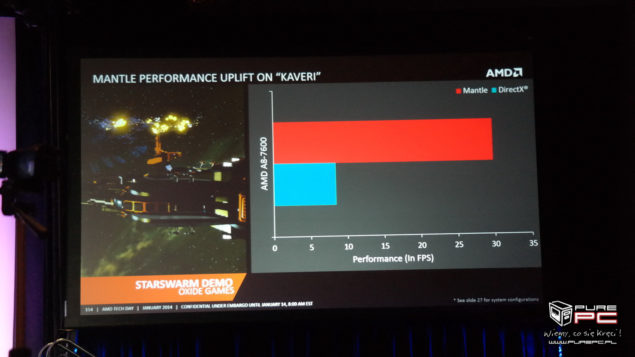 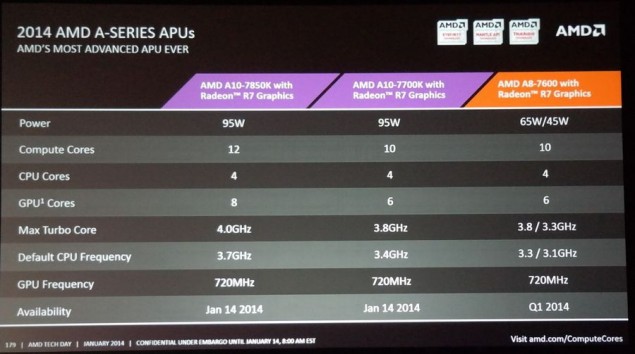 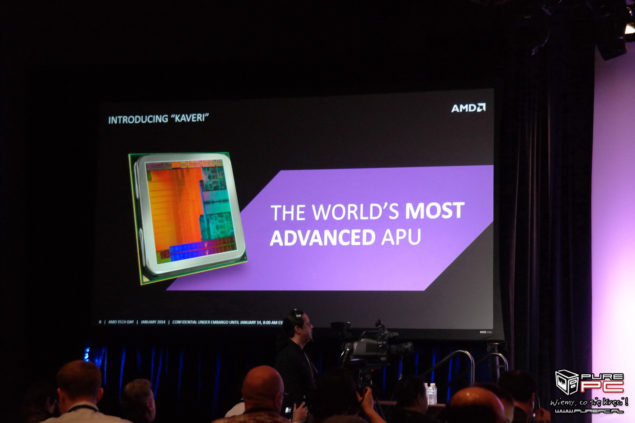 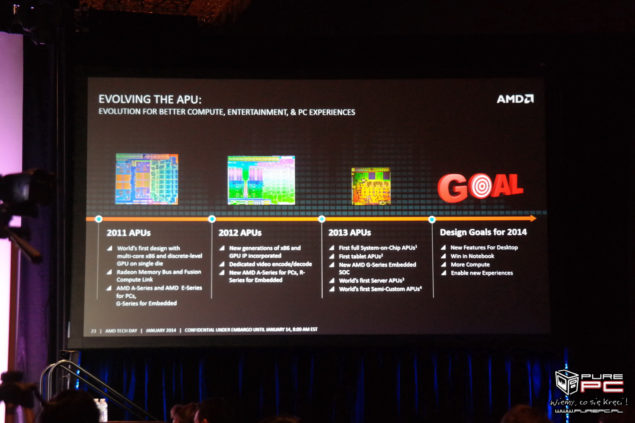 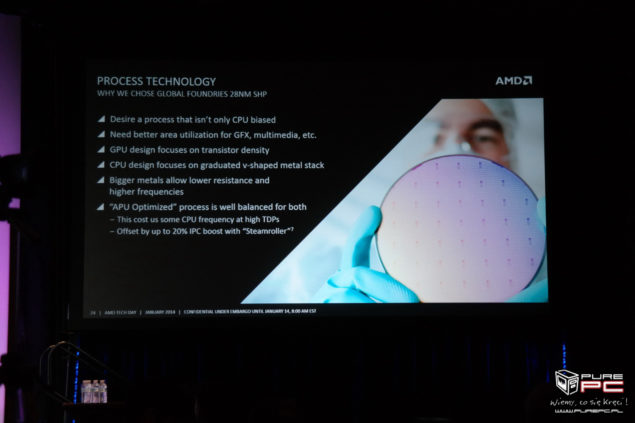