A few weeks back an image surfaced claiming to be a benchmark for the flagship of AMD's next generation of APU. However the authenticity of said benchmark was in serious jeopardy. We now have a benchmark and more from the much more authentic source. 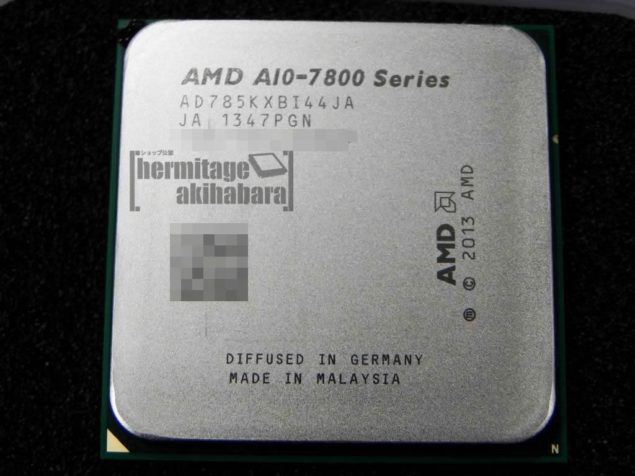 Images are courtesy of Hermitage Akhiabra!

This time we also have CPUZ and GPUZ screenshots of this benchmarking test as well as Physical Pictures of the 7850k APU. The benchmark was conducted in Cinebench R15. We already know Kaveri will have 512 GCN cores and will feature the Steamroller B Architecture. It is fabricated using the 28nm process and uses the FM2+ AMD Socket. According to the tests there is a 20% increase in the CPU section and a 30% increase in the GPU section.

Out source is citing price of around 189 USD and a release date of Mid January. Cinebench reveals a (CPU) score of 311cb in multi core performance and 88cb in single core performance. This is slightly below the i5-3317u CPU. Using the CPUZ Screens we can see that the APU is operating at a core voltage of 0.912v. CPUZ is reading the APU correctly (4 Core/ 4 Threads) as opposed to Cinebench's (2 Core/4Thread). The revision has been dubbed 'KV-A1' As expected GPUZ does not recognize the engineering sample, although it does read the Memory and GPU frequency correctly.