Pre-Order prices for AMD's upcoming A10-7850K and A10-7700K Kaveri APUs have been revealed by ShopBLT (courtesy of CPUWorld). The AMD Kaveri APUs are based on the next generation x86 Steamroller architecture and GCN cores which will deliver a huge performance uplift over Richland in both graphics and compute. 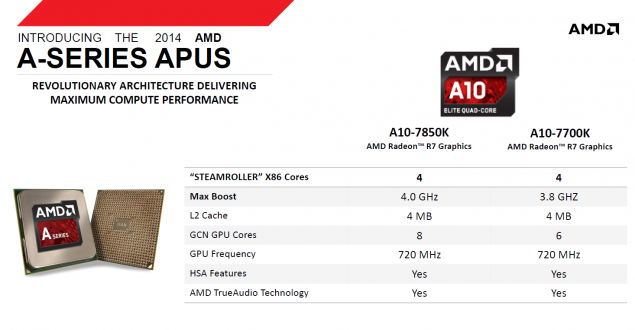 The clock speed of the APU is maintained at 3.7 GHz which is presumably the base clock while Turbo clock would push the speeds beyond 4 GHz barrier. The GPU which is positioned in the R7 2**D series is clocked at 720 MHz while the APU itself has 4 MB of L2 cache. The GCN graphics die would feature 8 GPU cores which represent a total of 512 stream processors. The TDP for the A10-7850K would be set at 95W. AMD A10-7850K will support both Mantle API, DirectX 11.2 and OpenGL 4.3 and feature dual graphics functionality with the AMD’s Cape Verde based discrete GPUs.

Next up, we have the A10-7700K which is another unlocked chip featuring the Steamroller core architecture with a max boost clock of 3.8 GHz and base clock of 3.5 GHz. It features 4 MB of L2 cache plus HSA features and True Audio technology support. The GPU side ships with a GCN graphics die featuring 6 shader units equaling to a total of 384 Stream processors clocked at 720 MHz. The A10-7700K features a TDP of 95W so we may see one Kaveri APU part based on the A8 series which would feature a TDP of 65W.

The A10-7850K has been listed $189.24 US while the A10-7700K has been listed for $167.00. Such retails have listed upcoming products much earlier prior to their launch but the prices have always been on the high-side until the official launch of the products. The actual price range of these chips would be set below the $150 price point when they launch on 14th January 2014.