With AMD's Hawaii R9-290X GPU leaked, it was only a matter of time before the performance results hit the web and thanks to Chiphell, we now know that Hawaii R9-290X is the fastest GPU in the world beating NVIDIA's Titan. 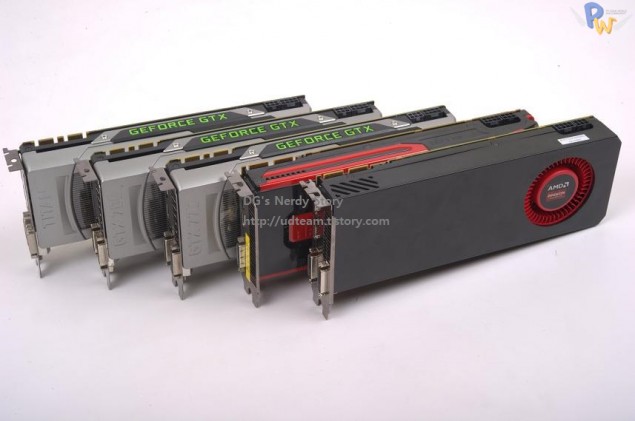 The Hawaii R9-290X GPU is part of the R-200 'Volcanic Islands' Family which is going to make its official debut on Wednesday in Hawaii next week. We have already heard some minor details regarding the Hawaii R9-290X GPU that it will feature a die size larger than Tahiti yet 30% smaller than NVIDIA’s GK110 core. It will be based on a 28nm process and would be available to consumers in mid-October 2013.

Now we officially know more than that, the R9-290X features a massive die size and a 4 GB memory running across a 512-bit interface. The core clock for the graphics card at default is maintained at 1020 MHz while the memory operates at 1250 MHz. While we would get 4 GB in the reference models, the leaker has also said that we will see 6 GB custom models soon after launch.

The R9-290X is powered by 8-Pin plus 6-Pin connector configurations which denotes a 300W TDP design. The VRM features 5+1+1 phase design (5 Phase Core and 1 Phase memory). The card has two DVI, HDMI and a display port to provide display output. We have almost all the details regarding the Hawaii GPU except the clock speeds and the core configuration which includes stream processors, texture mapping units and raster operators. Detailed look at the specifications below:

In the three tested games, the Hawaii R9-290X came out faster than the GeForce GTX Titan and GeForce GTX 780 except CRYSIS 3. You can see the performance results in the chart below:

As you can see, the Hawaii R9-290X came out overall faster than the other graphic cards in gaming benchmarks. Ofcourse, since mature drivers aren't available yet we will be noticing some hiccups in performance but overall the card is the fastest single chip GPU on the planet. Expect more benchmarks soon!

Full preview can be found at UDTeam!