It has been a few months since AMD launched their flagship Hawaii GPU to tackle NVIDIA's mammoth GK110 Kepler core. The Hawaii chip does a formidable job against its competition offering tons of performance for an absolutely great value. 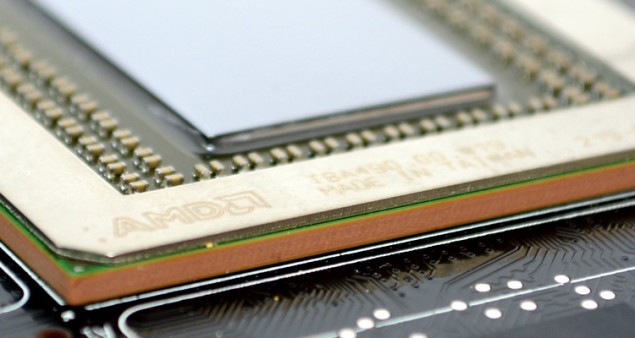 The AMD Radeon R9 290X is currently AMD's flagship Hawaii chip and for a while it seemed like if the Hawaii XT core featured inside the card was the fully unlocked variant boasting 2816 stream processors, 172 TMUs and 64 ROPs but a slide posted by DG's Nerdy Story (the first site to leak R9 290X and R7 260X) has unveiled that there's much more the Hawaii chip has yet to offer. The Hawaii XT chip inside the Radeon R9 290X has 4 Compute Units disabled as seen from the die shot which means that the fully enabled Hawaii chip is yet to launch.

The fully enabled Hawaii GPU as seen from the die shot has 48 Compute Units, 192 Texture Mapping Units and 64 Raster Operators. The 48 Compute units amount to a total of 3072 stream processors. That's the same number of cores once featured on AMD's Radeon HD 6990 dual-chip graphics card and also the same number of cores which are currently available on NVIDIA's GeForce GTX 690 dual-chip card. Although there's no comparison between the cores since all cards are based on different architectures but its still a surprise that AMD can integrated such a high number of cores in their flagship chip, NVIDIA's GK110 has a maximum 2880 Cuda core count on the high-performance GeForce GTX 780 Ti and its Tesla/Quadro variants. 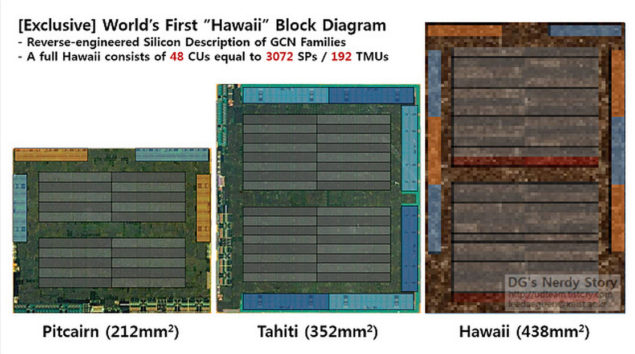 Image is courtesy of UDteam.Tistory!

The site's owner 'DGLee' posted a brief explanation on Guru3D forums about his findings which can be seen below:

When I apply 44 CUs for Hawaii GPU, I earn 410~415mm2 die size which is quite smaller than its revealed size (438mm2). Interestingly, I could get this number only when I apply the amont of CUs equal to 48, which means AMD's highest SKU as of today (=290X) is being shipped as 'not-fully-capable' status. In other words, a full Hawaii GPU has 3072 SP and 192 TMU at the highest probability. via Guru3D Forums

Just in case you are wondering, the current Hawaii GPU block diagram is posted below:

None of this is yet confirmed since AMD hasn't officially confirmed anything yet but based on the findings by DG, its a high probability that AMD will come up with a new Hawaii XTX (let's just call it that for now) in the near future if the chip has the mentioned specifications. Do post what you think about this news in the disqus  panel below: