Update: It can be confirmed based on new findings that this rumor was a mere misreport by Sisoft and was the regular Tonga variant with 28 compute units being jumbled up with 80 SPs per CU instead of the 64 SPs per CU found on the latest GPUs. Also, this rumor was far to inconsistent with the previous reports we heard about the R9 370 series cards and rebrands bases on the Tonga die.

We know that AMD is currently preparing their latest R300 series graphics cards which will be set to launch in Q2 2015 however AMD has not released any information regarding their upcoming cards till now. There have been several leaks during the passing time and we have known the R300 series by many new names, many new GPU codenames and ever changing specifications which keep confusing the masses waiting for AMD's latest cards. 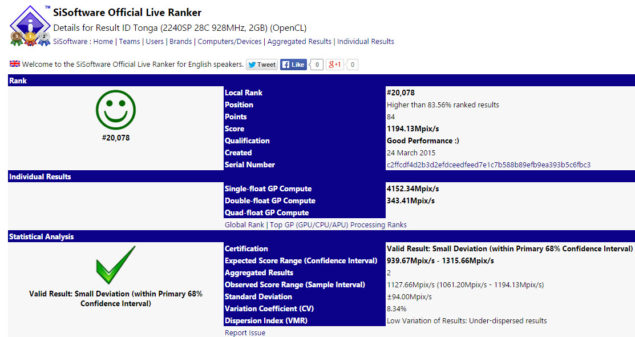 While I personally advise everyone to take the information regarding AMD's upcoming graphics cards with a pinch of salt, I will still try my best to find information from sources to provide latest updates on the upcoming generation of cards from AMD and NVIDIA. The latest information on AMD's cards was tipped by Cloudfire who has summed up his findings from Sisoftware over at Anandtech Forums. The information reveals that the Tonga GPU which was introduced on the Radeon R9 285 and Radeon R9 M295X might be cut down variants of a even larger core which we haven't seen yet. The Tonga XT which we expected the Radeon R9 M295X could merely have been a more optimized version of the much larger Tonga core whose details have allegedly been leaked through Sisoftware.

We know of two variants of the Tonga GPU, the first one went inside the Radeon R9 285 which was meant to offer better power efficiency and better performance than the Radeon R9 280 series as its naming suggested. What Tonga turned out to be was a more mainstream offering that wasn't meant to push performance but offer better architectural enhancements which would be carried on to the latest iteration of the GCN core architecture. The Radeon R9 285 feature 1792 stream processors inside its 28 CU core design and had a 256-bit bus opposed to the 384-bit bus which was featured on Tahiti. AMD justified that the 256-bit bus was enough due to the color compression feature on Tonga which was meant to enhance memory bandwidth efficiency by allowing the GPU to use the available bandwidth more efficiently hence reducing any imminent bottleneck.

The next chip to make use of the Tonga core architecture was the Radeon R9 M295X. A mobile chip made exclusively for Apple's 5K iMac and featured 2048 stream processors alongside a 256-bit memory bus which happened to have 4 GB GDDR5 VRAM. Since the release, the R9 M295X was though to feature the flagship Tonga SKU however there was a bit of confusion as to why AMD didn't brought the top Tonga chip to the desktop market.

There were several reasons, with AMD meeting Apple's demand for their iMacs but the most famous rumor was considered to be the Maxwell launch. It was thought that AMD might have ditched the Tonga core for a new Radeon R9 285 series parts since it lacked behind the Maxwell GM204 core in all possible ways. The R9 285 sold for $249 US and the upcoming Radeon R9 285X might have hit the price target of $299 US. With the GTX 970 selling at $329 US at its launch, it was not good business for AMD to launch full Tonga at that time.

Tonga Rebranded to Antigua? Going Inside The Radeon R9 370 Series?

A few days ago, another rumor on the possible codenames popped up (which aren't official) showing new codenames for a few existing cards. The codenames mention Antigua which might be a rebranded Tonga family and could be going inside the Radeon R9 370 series cards. But are we still to expect a 1792 and 2048 SPs Tonga variant in the upcoming cards?

The leak from Sisoftware shows the possibility of a third and much more beefier Tonga chip which features 2240 stream processors arranged in 35 CUs. While the actual listing says 28 CUs, it could either be two things, this is just the regular Tonga being misread by Sisoftware or it could actually be a 2240 stream processor variant.The chip mentioned has a 256-bit bus as indicated by the 2 GB VRAM and a clock speed of 928 MHz which is lower than the Radeon R9 285 clocked at 965 MHz. While being clocked lower, the card has 40% better speed efficiency standing at 1.29MPix/s/MHz compared to 1.10MPix/s/MHz that the R9 285 featured. The possibility of a Radeon R9 370 with the 2048 SPs core and Radeon R9 370X with 2240 SPs are likely but as pointed, these rumors are rumors for a reason and nothing should be taken in consideration as absolute fact till proper information is available. Based on these allegations, the following block diagrams of the several Tonga variants can be deduced: 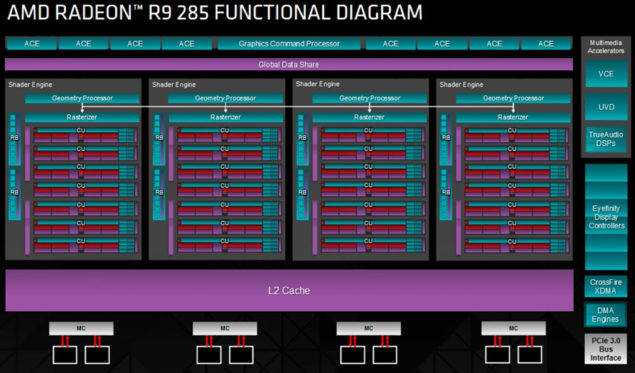 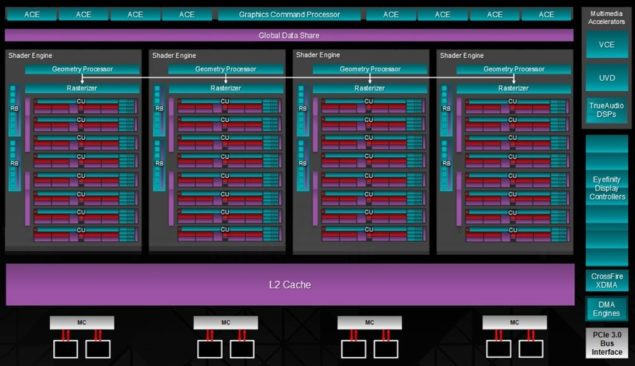