AMD's FreeSync technology was officially launched back in March but one of the major caveats was that it could only support a single GPU. Red had promised support for crossfire by April, but since that didn't happen, they posted an update on the situation. Apparently, AMD has yet to iron out the glitches in cross fire support and the release of this anticipated feature has been "delayed" with no tentative date provided. 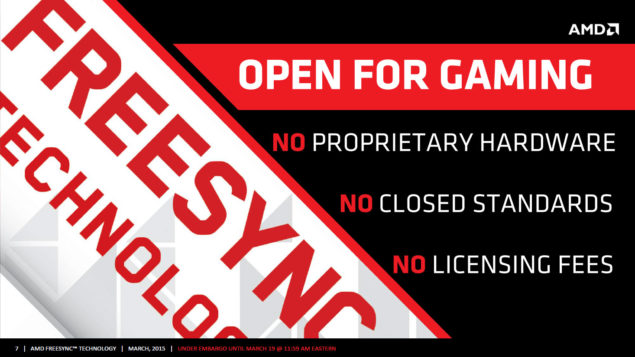 A slide from the official slide deck. @AMD Public Domain

Traditional guidelines tell me to give a brief overview of FreeSync here, but I am pretty sure if you are reading this, you already know what it is. The open standard technology that will rival Nvidia's G-Sync was launched a month back and is basically red's take on adaptive refresh rate for gaming monitors. Using VESA's protocols, the technology has no licensing fee and has minimal hardware requirements (monitors need to adhere to certain VESA standards). However, as of yet, Multi-GPU configurations are not supported and AMD had the following to say about it recently:

AMD fans have been outspoken about their love for the smooth gameplay of AMD FreeSync™ technology, and have understandably been excited about the prospect of using compatible monitors with the incredible performance of an AMD CrossFire™ configuration.

After vigorous QA testing, however, it’s now clear to us that support for AMD FreeSync™ monitors on a multi-GPU system is not quite ready for release.

As it is our ultimate goal to give AMD customers an ideal experience when using our products, we must announce a delay of the AMD Catalyst™ driver that would offer this support. We will continue to develop and test this solution in accordance with our stringent quality standards, and we will provide another update when it is ready for release

So there you go folks, looks we will have to wait a while before FreeSync is able to handle multiple Radeons in Crossfire. Needless to say this is a very important feature, but I am pretty sure that most Radeon owners would agree that a perfected but delayed launch is better than a buggy early launch. This time however, AMD has not provided any tentative time frame as to when this might happen. Hopefully however, the feature would roll out within a few months or so.