The selection of AMD FreeSync monitors is gaining five new worthy additions come CES 2016 from LG and AOC with a truly impressive and diverse set of features and specs. With CES 2016 quickly approaching many companies are announcing what they're planning to debut ahead of the event, as such we're getting a glimpse into what LG and AOC have in store for us next month.

Both companies announced several monitors that will be showcased at the CES 2016 show floor in Las Vegas, however in this particular article we'll only discus the monitors which have been announced with FreeSync support.

The C3583FQ from AOC is one of the more exciting additions that we've seen. This is a ultrawide 21:9 gaming monitor features a beautiful curved AMVA panel with a refresh rate of up to 160Hz - with overclocking - 144Hz standard and support for AMD FreeSync technology.  The company did not reveal what resolution this monitor will support, but it's safe to say that we're looking at either 3440x1440 or 2560x1080. The I/O is comprised of 2 x HDMI 1.4 ports, 2 x DisplayPort 1.2a+ ports and a 3.5mm audio jack. Finally the monitor also features integrated rear facing  5W speakers.

The second FreeSync monitor AOC is going to showcase at CES is the U2879VF. Which features 28" TN panel featuring an UHD (3840x2160) resolution and a 60Hz refresh rate. AOC states that this monitor is set to be available in stores by March of next year.

All three monitors from LG feature beautiful IPS panels and AMD FreeSync technology. The UD68 is a flat 27 inch display with a resolution of 3840x2160 and a maximum refresh rate of 60Hz. 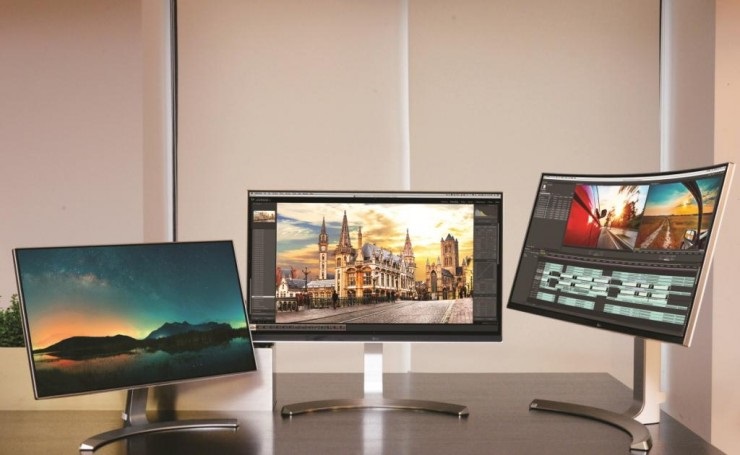 The UC88 29" and 34" both feature curved ultrawisde 21:9 panels and both sizes feature a 3440x1440 resolution and come with Thunderbolt 2 connectivity. LG has not yet announced what maximum refresh rate these curved monitors will be capable of but we're probably looking at 60 to 75 Hertz.

Below you'll find a complete list of all AMD FreeSync monitors which have been released to date.