Hype about AMD's upcoming Fiji XT based graphic card, the alleged Radeon R9 Fury X, is at an all time high and we have something more to add to the flames. Here are some exclusive renders and details about the upcoming AMD flagship. The card is expected to release on 16th June but it looks like everything pertaining to it will be out beforehand (like always). 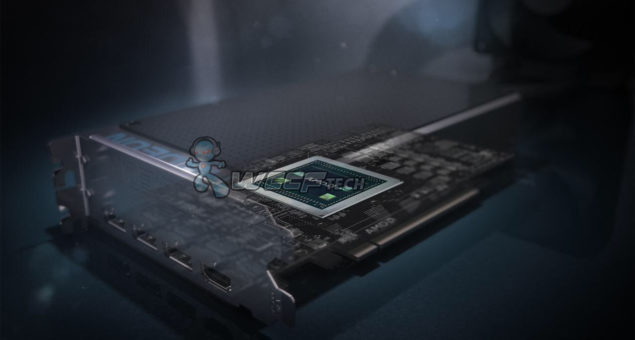 A render of AMD's upcoming Fiji XT based flagship. @Wccftech and (Soon to be) AMD Public Domain

We know that the Fiji XT variant (at the very least) of the internally codenamed 'Fury' series will be watercooled. We also know that AMD is planning to release Fiji PRO powered graphic cards as well. If the internal nomenclature AMD is using right now makes it to the shelves then the full die will be called R9 Fury X while the cut die will be called R9 Fury. Both will have exactly 4GB of HBM memory. The card is powered by a 2x 8-pin connector but should have wattage less than 300 Watts.

The PCB of the graphic card is pretty small. Its actually just 19 cm in length. The reason for this is pretty simple, the power circuitry has been moved closer to the die. If you look at the first render you will notice that the chokes and capacitors of the power circuit are much closer to the die than usual. Usually there is a layer of GDDR5 memory in between, something that is completely absent here (obviously). However, while there is no memory layer, the interposer compensates by being pretty damn huge. It measures 55mm by 55mm for a total area of 30.5cm^2. The Fiji die itself should measure around 480-540mm^2 (reverse engineering it from the pictures). A single HDMI 2.0 and 3 DisplayPorts (1.2) are present. Given below is another render of the watercooled FijiXT based graphic card: 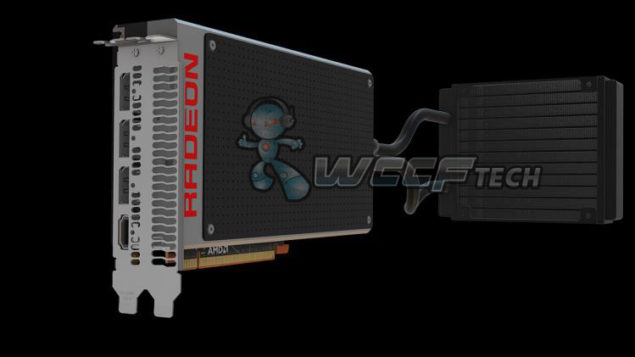 The R9 Fury X will be AMD's strongest card in the lineup and will be poised to target the TITAN-X. Matt Skynner CVP of AMD has also stated that the card is the 'fastest GPU in the world' so anticipation is building up to unprecedented heights for the Fiji launch. Regardless of how good the card performs, the thing that makes or breaks the Fury lineup will be the pricing strategy. AMD has always priced its products very fairly and a 'watercooled-world's-fastest-GPU' at the right price will sell like hot cakes.