AMD's brand new Crimson Driver update was a much welcomed update for many - but it also spells the end of support for some Radeon owners - namely those with a graphic card older than GCN. These include Radeons built on the VLIW4 and VLIW5 architecture and have been shifted to "Legacy" status following the Crimson update. However, AMD has promised a one-last driver support, given as-is, with its Crimson update. Not a bad way to send off legacy hardware at all, considering that legacy users will still be able to glimpse what Crimson has to offer. 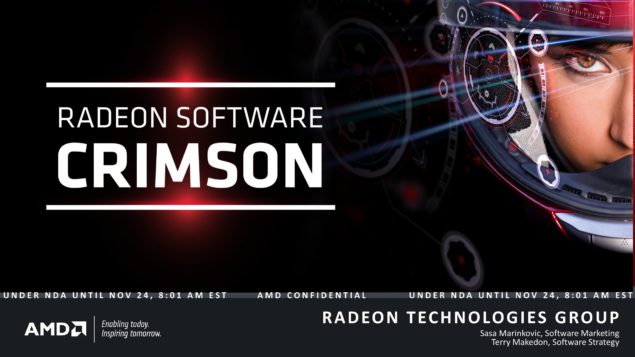 After this news, the last two driver builds for Evergreen and Northern Islands GPUs are Catalyst 15.7.1 (stable) and a beta build of Crimson 15.11 provided as-is. Ofcourse, AMD stopped selling VLIW4/5 based GPUs a few years back and the uarch has been outdated ever since the original Graphics Core Next architecture came out. It was only a matter of time before support ended for good and AMD has managed to send it off in a reasonable fashion. The company posted the following with the changelog:

These products have been moved to a legacy support model and no additional driver releases are planned. This change enables us to dedicate valuable engineering resources to developing new features and enhancements for graphics products based on the GCN Architecture.

It is worth mentioning that the architectures that have been cut off were not able to support DirectX 12 and since that is pretty much the future of APIs (on the Windows side atleast), it makes sense to terminate support. Talking about old support, Nvidia has promised to support DirectX 12 with Fermi based GPUs, yet there hasn't been any word on the same for quite some time now. The last update posted by the company stated that DX12 support for Fermi cards will appear sometime at the end of the year, and around the time the first DX12 based content is released. Since the year is drawing to a close, we will either be seeing the DX12 driver soon enough, or an announcement to the contrary.