AMD has just confirmed that the company would not unveil any new GPU and keep the HD 7000 series as their primary focus for a while. This was confirmed by AMD's Radeon marketing manager "Robert Hallock" on AMD's Radeon Twitter page. 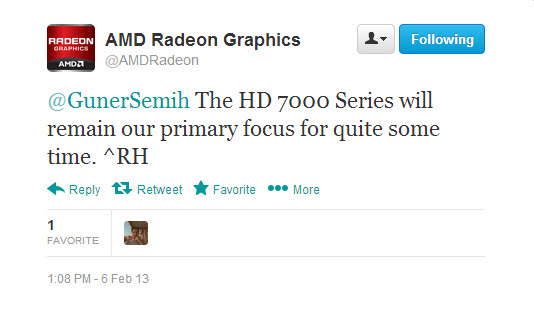 This delays comes a few days later after reports came in that both AMD and NVIDIA could have delayed their next generation GPUs till Q4 2013.

The source of the news "Sweclockers" suggested that AMD would instead launch their own Radeon HD 7990 'New Zealand" part while NVIDIA would go ahead with the launch of their GeForce GTX Titan this month. So what would happen to the Radeon HD 8000 Sea Island series? They will launch but after a long wait in fourth quarter of this year so its better if you want to upgrade then go for a Radeon HD 7000 series card and get a Never Settle promotion and call it a day. Otherwise you can wait for the flagship cards to arrive in Q2 2013 which will hit your wallet hard with price tags around the $1000 US mark.

Overall this is quite sad that we won't get any new stuff from AMD's GPU department sooner in 2013, the company however is developing a new real time dynamic overclocking technology but for what GPU? That is yet to be seen.