Yesterday, DICE launched the latest patch for Battlefield 4 which enables Mantle API support along with other performance and stability fixes. While the patch only adds Mantle support to the game, an AMD catalyst driver update is still required to enable Mantle in-game.

DICE had originally planned the launch of their Mantle Catalyst driver 14.1 BETA for late January and should have been available to users by now. However, it seems like AMD has to delay the update to early February (1st-2nd) due to a major bug which was found during the last minutes of the driver roll out. The Mantle Catalyst driver will now be labeled as the Catalyst 14.2 BETA keeping the driver naming scheme in conjunction to the calender. The following update was passed on by TechPowerUp:

AMD now tells us that their teams have been working overnight to fix the driver, and should have their next status update for us by mid-afternoon EST (New York time), later today. TechPowerUp

This is hardly a day or two delay by AMD and its better to solve the bugs in the driver then releasing a bugged version which will cause issues to end users. The Mantle Catalyst driver was planned to launch yesterday with Battlefield's Mantle patch which has already been downloaded by the Battlefield 4 audience yet they will be unable to run the game with the Mantle API renderrer unless the catalyst driver from AMD is rolled out which will take another day or two.

AMD Mantle is an ambitious project which aims to deliver improved performance by fulling utilizing the hardware capabilities by digging deep into the CPU/GPU core. We have already seen the performance impact of Mantle in Battlefield 4 showcasing some impressive results with low to mid-range processors and eliminating bottlenecks on even the high-end Intel HEDT processors.

Update - AMD has just updated through twitter that their upcoming driver would support and enable mantle for all existing and upcoming GCN based products. AMD also assures further optimization with future released of the catalyst driver.

The Mantle Catalyst driver 14.2 BETA will initially feature support for only four GPUs at launch which include the Radeon R9 290X, Radeon R9 290, Radeon R7 260X and the Radeon R7 200 series integrated Kaveri APUs. Kaveri looks more interesting since we have seen upto 50% performance improvement with the Radeon R7 260X and A10-7850K in the official benchmarks. Ofcourse, the press would be able to review the driver release early on and would be given an exclusive 24 hour period to evaluate the features and performance of the 14.2 BETA drivers before they are publicly released. 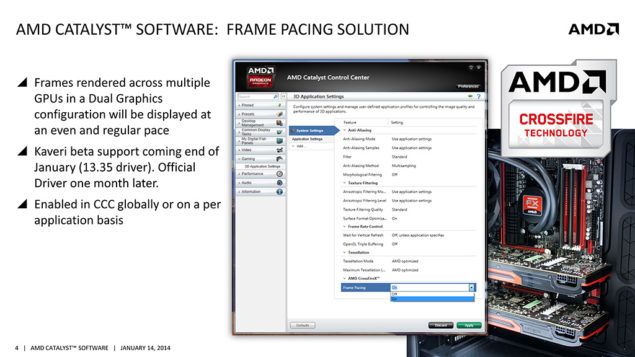 The WHQL certified version of the driver would be available a month later as previously stated in the leaked slides which may add support for further GPUs which include the Radeon R9 280X, Radeon R9 270X, HD 7000 series, etc. DICE has also stated that they will keep on patching the Mantle API with more improvements in the upcoming releases.