There has a lot of talk going on around DirectX 12 and how new and current graphics cards would utilize the latest API to leverage performance in upcoming gaming titles. In an interview with Computerbase regarding DirectX 12, AMD's Robert Hallock (Head of global technical marketing) revealed that their current GCN cards don't feature full DirectX 12 support and are limited to Feature Level 12_0 while the rivaling Maxwell graphics cards have full Feature Level 12_1 support. 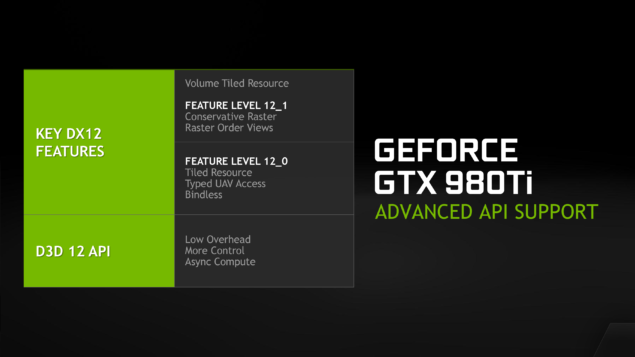 DirectX 12 will be the latest API from Microsoft that is built to leverage performance across several platforms. It is designed for PCs, Consoles, Tablets and even phones that are running the Microsoft Windows 10 OS. Since its announcement, graphics manufacturers such as Intel, AMD, NVIDIA and even Qualcomm have claimed that the hardware they built will fully support DirectX 12 capabilities. We have come a long way since the revelation and bits by bits, we get more information regarding the different feature levels and advantages of the API. The first thing we knew about DirectX 12 API was that it was built for low CPU overhead by reducing the CPU bottleneck faced by the graphics card and fully utilize the processor to its maximum potential. The other features included more control over hardware by the developers and a fully asynchronous computing method which is faster and efficient.

The reference DirectX 12 API (Feature Level 11_0) has performance targeted features while the other two level deliver graphical improvement and this is what really matters in improving the games visually. The feature level 12_0 comes with Tiled Resources, Typed UAV Access and Bindless Textures support. Feature Level 12_1 has the Raster Order Views, Conservative Raster and Volume Tiled Raster enabled on the API. We have talked about these features in previous articles detailing the performance improvement, explicit multi-adapter technology and graphical updates. But to enable these new technologies, the hardware built by companies need to be full compliant with it.

AMD has recently confirmed that their current cards can support Feature Level 12_0 at best while NVIDIA's Maxwell 2.0 architecture has support for Feature Level 12_1. The cards that feature level 12_ 0 support include Radeon HD 7790, Radeon R7 260 (X), Radeon R9 285, Radeon R9 290 (X) and R9 295X2. The older cards such as the ones based on Tahiti, Pitcairn that include all the 7000 series cards (excluding HD 7790), Radeon R9 270 (X) and Radeon R9 280 (X) feature up to Feature Level 11_1 support. Robert Hallock believes that there's no problem with not feature DirectX Feature Level 12_1 support since features are performance enhancing tools are already available in 11_1 and 12_0 and most games won't rely on utilization of 12_1.
Google translation

According to Hallock, the absence of the feature level 12_1 is no problem in principle. So the key for games features are all included in the feature level 11_1 and 12_0. In addition, most games would already geared to the console and thus hardly rely on 12_1.

This however could hurt AMD in the long run against Maxwell (GeForce 900 series) cards that are compliant with DirectX 12 feature level 12_1 and that was proved in their recent GeForce GTX 980 Ti launch. NVIDIA's older cards, such as Kepler and Fermi come with Feature Level 11_0 support with partial Feature Level 11_1 support.

This could mean that AMD's only Feature Level 12_1 compliant card would be their new Fiji GPU based cards launching this month. However, judging by Robert Hallock's statement on how DirectX Feature Level 12_1 isn't important for them, it could also mean that that they will also have limited support on Fiji but that is yet to be confirmed.

@Ramzinho @amd_roy DX has always had FLs, but they're for devs. Not meaningful for users. You support DX12 or you don't. THAT'S what matters