It seems like AMD is getting ready for multiple launches in 2016, not only on new platforms but also for existing platforms. You may have heard of Carrizo which serves AMD as their flagship mobility processor lineup, but you might be surprised to know that Carrizo might soon be coming to the FM2+ desktop platform in the form of the latest Athlon chips. 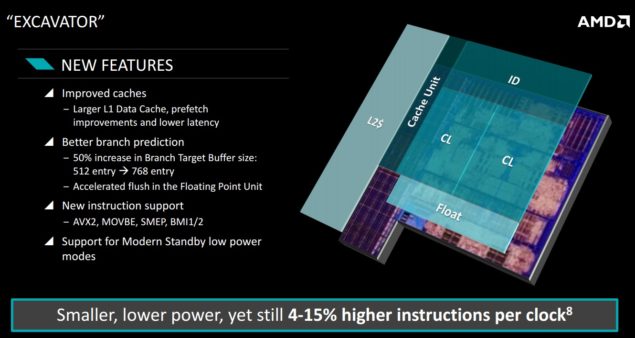 Carrizo has been serving the mobility sector for a while and AMD launched their Kaveri refresh platform for the desktop platform called Godavari. Godavari might have brought nothing new to the desktop market but AMD's upcoming Athlon chips will act a small refresh on the budget FM2+ platform. While AMD is expected to launch their Carrizo APUs for desktops under the Bristol Ridge family that will be supported by the new AM4 boards, the Athlon chips are getting a quick update on the existing FM2+ motherboards and Gigabyte has leaked two Athlon processors in their CPU support list for such motherboards which are using the latest Excavator 28nm core architecture, an updated version of the steamroller architecture featured on Kaveri processors. 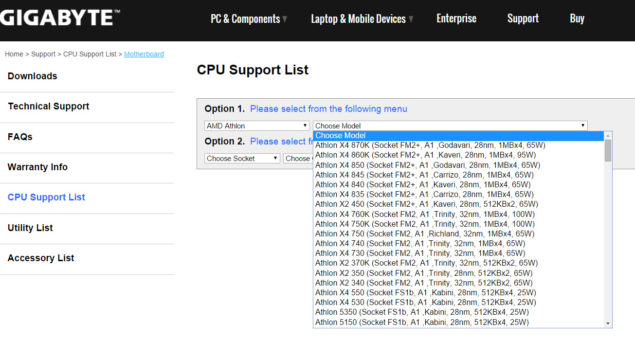 The two processors known as Athlon X4 845 and Athlon X4 835 are 28nm Excavator brand and fall under the Carrizo family of processors. Carrizo has several CPU and APU models on the mobility platforms but these chips will be the first models that will be geared towards the desktop platform. Being branded as Athlon chips, their iGPU has been excluded but in return, we get cheaper built processors that perform just as good as most of the modern chips available.

The AMD Athlon X4 845 and Athlon X4 835 processors are both quad core chips which feature 4 MB of L2 cache and 65W TDPs. We don't know the exact clock speeds of these chips but based on Carrizo will give them a good boost over their Kaveri based counterparts and the updated 28nm process assures better efficiency. We aren't sure if these will be the only Carrizo chips available on FM2+ platforms or there will be more but Gigabyte has already started seeding their latest BIOS for FM2+ motherboards which adds support for Carrizo processors as seen on their official website. The BIOS update was released last week so it's a fresh release and from the looks of it, the processors themselves couldn't be much far away.

There's no actual launch date or pricing given but given that these are entry level Athlon chips, we are looking at a sub-$90 US pricing for both these chips or even lower. There is a slight possibility that both chips will be sold exclusively in the Chinese markets as AMD has several APAC targeted products in the line. Even their X4 870K Godavari processor was sold exclusively in the Chinese and Japanese markets so people living in US and EU might be out of luck.