AMD's Carrizo APU "Mobile" platform specifications and details have been unveiled in a slide posted by VR-Zone. The slide confirms pretty much everything we have known about Carrizo and will end much of the confusion that has been build around the information regarding AMD's 5th generation of accelerated processing units for their mobile platforms. 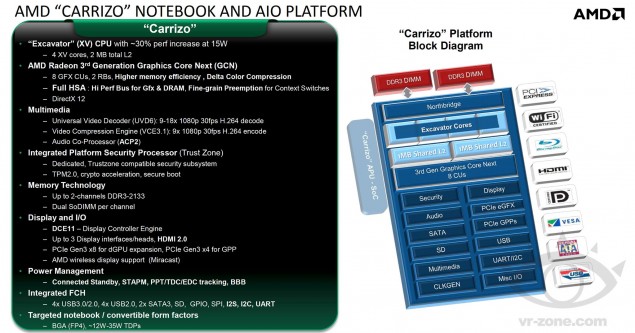 The platform details regarding AMD Carrizo APU have been unveiled for the Mobile platform rather the desktop platform but we will believe that the desktop platform will be similar in terms of architecture and design as was with Kaveri generation of processors, earlier this year. If you look at the picture of the slide posted by VR-Zone, you will note that it is very similar to the SteamrollerB powered Kaveri 2.0 platform slide which was leaked almost 8 months ago and turned out to be true at the time of Kaveri's launch since most of the details reported were accurate.

AMD’s Carrizo APU would become the fifth installment in the Accelerated Processing Units family which will feature the latest Excavator core architecture. From previous leaks, we have come to know that Excavator is based on a 28nm process probably based on GlobalFoundaries since AMD chose it the node for Kaveri too. Powering the CPU side, these new x86 Excavator modular cores will leverage the IPC for greater performance compared to Steamroller. The mobile platform will feature both Quad Core and Dual Core variants but right now, we are looking at a glimpse of the top-end variant which shares 2 MB L2 cache.

Prior to this leak, rumors revealed that Carrizo will feature 30% performance increase over Kaveri generation of processors which we thought was pure speculation at best but the slide clearly mentions a 30% increase at only 15W power input which is pretty impressive. Additionally, AMD will also add AVX2, BMI2, MOVBE and RDRAND support to the instruction set which brings the extension feature set close to Intel’s Haswell. Since the targeted platforms for these APUs are notebooks, all-in-ones and convertibles, they will be shipped in BGA )FP4) package and will ship in variants ranging in TDPs of 12/15/35W.

On the GPU side, we have the 3rd Generation GCN (Volcanic Islands) core which is a great plus point for this level of APU. You should keep in mind that the Volcanic Islands graphics isn’t the codename for AMD’s Radeon R200 lineup but infact used to denote their flagship Hawaii based chips. This is a key hint that AMD’s next generation flagship parts would have the same improved GCN architecture currently fused only inside the Hawaii chips which feature true AMD Mantle, AMD TrueAudio and AMD OpenCL optimizations. The integrated graphics would still be based on the 28nm process and its hard to say whether the Compute Unit count will increase in the Carrizo APU generation of products. We will definitely see an improved and efficient design which will allow faster clock speeds on these great integrated chips which make many upcoming games run off without the need of a discrete graphics card at decent detail quality.

The graphics die will still feature 8 Compute Units which denote 512 stream processors along with higher memory efficiency which will deliver better performance throughput since APUs are generally bandwidth starved, Delta color compression and feature full HSA support with a high-performance integrated bus for graphics and DRAM along side some software enhancements such as Fine-grain preemption for context switches and in addition to Mantle, feature support for DirectX 12 API too.

The most interesting thing about Carrizo, aside from its technical specifications is also the design of the chip itself. AMD for the first time is aiming for a true SOC design eliminating the need of a separate FCH as was the case with Kaveri mobile which requires Bolton FCH for additional connectivity options. The FCH will be integrated on the die itself which will deliver Security, Display, Audio, PCI-e, SATA, SD, USB, Multimedia, UART/12C. CLCKGen and Misc I/O connectivity. AMD is aiming for UVD6, VCE3 and a audio co-processors with H.264 encode while feature a display control engine "DCE11". With HDMI 2.0 that provides up to 3 display interfaces and PCI-e Gen 3.0 x8 for discrete GPU expansion and PCI-e 3.0 x4 for GPP, the APU begins to look like a decent improvement over Kaveri from a design perspective.  The FCH can deliver 4 USB 3.0 / 2.0 ports, 4 USB 2.0 ports and 2 SATA 3 ports while the memory controller allow for Dual Channel DDR3 memory rated at 2133 MHz in SoDIMM form factor (One per channel).

AMD will release Carrizo APU next year in 2015 which will feature both mobile and desktop platforms. The mobile platform is targeted as a SOC while desktop chips will be compatible with FM2+ socket with the A88X "Bolton" FCH. Rumors have pointed out to a FM3 motherboard which will allow simultaneous support for DDR3 and DDR4 memory while some have even pointed to stacked DRAM for the APU which will leverage the graphics output on the processor however we cannot confirm this at the moment so its better to wait for more details to pop up in the future. 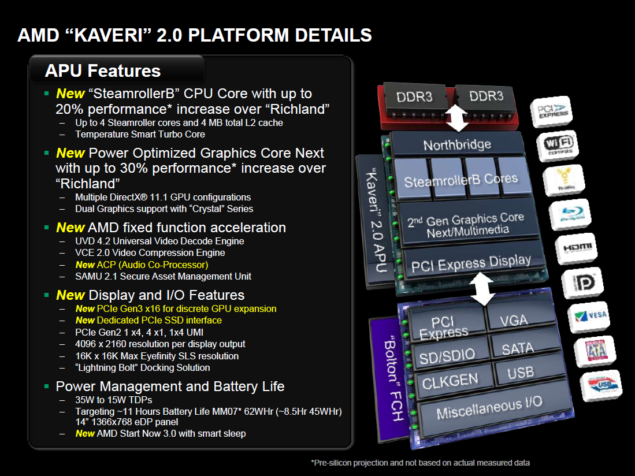