AMD has planned to launch two new processor families in 2016 which will be aimed at desktop and mobility platforms. The first of these families is known as Bristol Ridge which will feature a range of chips for the AM4 and FP4 sockets. The Bristol Ridge family is expected to hit the market in first half of 2016 and the latest leak shows us what to expect from the Excavator powered family of processors.

The Bristol Ridge family is built for mainstream desktop and high-performance mobility products while the Zen based Summit Ridge family will be featured only on desktop platforms in 2016. The latest leak comes from the Citavia Blog which has compiled a list of Bristol Ridge SOCs along with their specifications. The compiled list was built with the help of USB.org where a list of these processors had been listed down. The site lists down a total of 13 SKUs however there could be more. Matching these with the previously leaked SKUs list by Benchlife.info, the site was able to provide a detailed list of the upcoming processors. First of all, the 13 upcoming processors include: 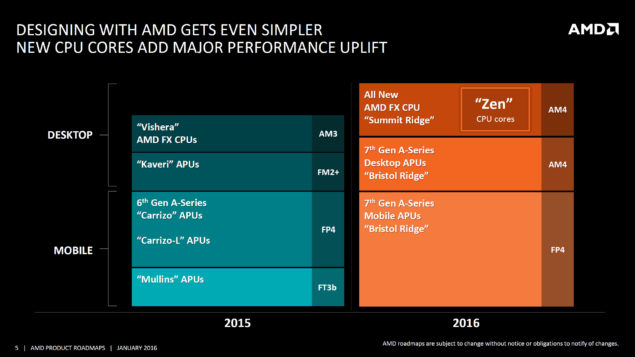 A quick glance at the technical features of both Carrizo and Bristol Ridge reveal no differences from both APU families. Both are based on a 3rd generation GCN architecture (GCN 1.2) which is the same version incorporated on the Fiji and Tonga GPUs. Both APU families have full support for DirectX 12, provide great audio, UVD, VCD, DCE features and support Dual Graphics, Panel Self Refresh, Dynamic Bezel Adjust along with the ability to run up to 3 simultaneous displays. Bristol Ridge APUs will feature up to four x86 Excavator cores with 2 MB of shared L2 cache. They will have support for HSA 1.0 and the latest DDR4 memory standard. The Excavator core ensures better IPC (Instruction per clock) versus previous generation cores.

As you can note, the Bristol Ridge SOCs get a nice clock speed improvement while retaining the same TDP and the same process node. This is a significant gain in terms of efficiency and is part of the power management in the latest generation of processors which we will also get to see on the high-performance Zen core. 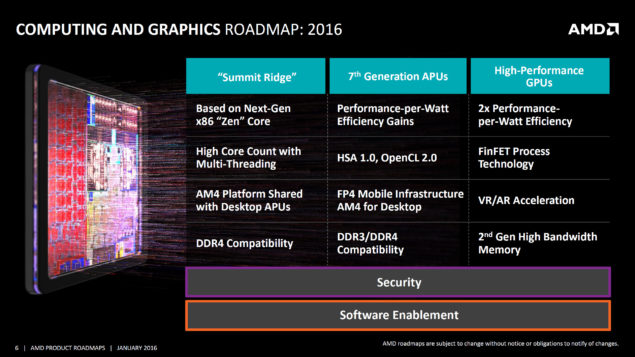