AMD has announced their 7th Generation APU family codenamed Bristol Ridge. The Bristol Ridge APUs are the next chapter in AMD's APU lineup which will bring improved performance, faster graphics cores, high efficiency and support for new technologies such as DirectX 12. The Bristol Ridge APUs for notebooks are an update to the Carrizo APUs which have been available in the market since last year, delivering a good boost in performance to users who'll be purchasing a new laptop during summer 2016. 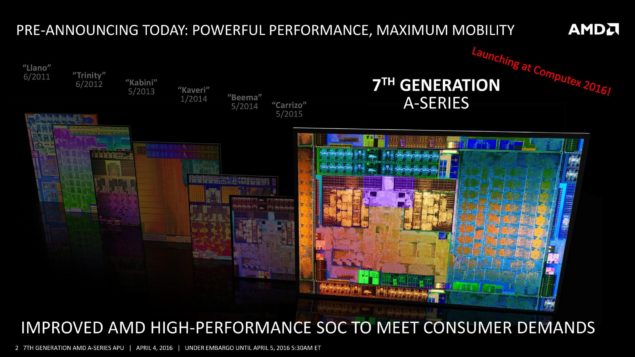 AMD wants to showcase the performance and general improvements that come with Bristol Ridge before they get to launch the new family. The Bristol Ridge family for notebooks brings a general update to the Carrizo APU and features the SOC (System on Chip) design. AMD has previously confirmed that they will launch Bristol Ridge for both notebooks and desktop platforms but AMD is specifically talking about the notebook parts right now. 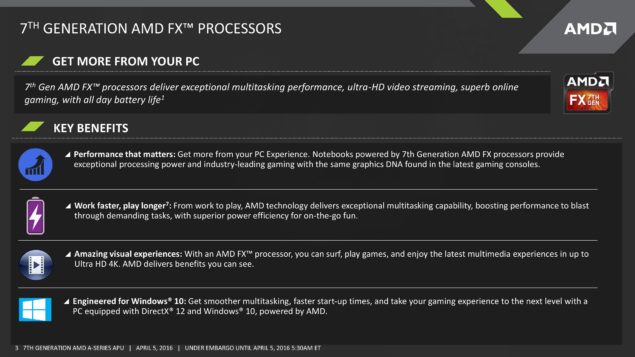 The AMD Bristol Ridge family for notebooks comes with a range of modern features.

"We know that consumers want more for their money than ever before – sharper graphics, faster performance, and longer battery life. We have focused on working with key OEM partners to develop outstanding computing platforms that will fully take advantage of the powerful 7th Generation AMD APUs," said Jim Anderson, senior vice president and general manager, Computing and Graphics Business Group, AMD. "I'm excited that consumers will start to see some of these fantastic systems come to market so soon. I'm very proud of the exceptional AMD engineering execution that enabled us to accelerate these exciting new products into the market for our customers and end users." via AMD

One of the main changes that Bristol Ridge brings to the notebook market is a new memory controller. While Carrizo supported DDR3L/LPDDR3 memory types on the notebook side, Bristol Ridge will feature an improved DDR4 memory controller making this the first AMD notebook series to support the new memory standard. The Intel Skylake generation of processors unveiled in Q3 2015 already feature support for DDR4 memory on both notebooks and desktops. AMD also had DDR4 support for Excavator based APUs and chips on the embedded market but this is the first time they will be bringing DDR4 to the mobility sector. 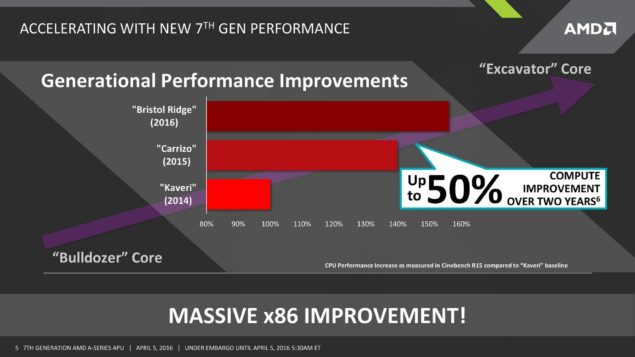 In other benchmarks which test AMD's Graphics and Compute design such as 3DMark and PCMark, AMD notes an up to 18% performance increase with a Bristol Ridge FX series APUs when compared to the FX-8800P APU. Compared to Intel's Core i7-6500U, AMD leads with better graphics performance with their upcoming 7th gen chip but lacks slightly behind the Intel chip in PCMark performance test.

The new Bristol Ridge family will be formerly announced at Computex on 31st May, 2016. AMD might also show case their new AM4 platform and rmotherboards for the desktop lineup at the hardware show.

What We Know About the Bristol Ridge Family So Far

Both Bristol Ridge and Carrizo APUs are based on a 3rd generation GCN architecture (GCN 1.2) which is the same version incorporated on the Fiji and Tonga GPUs. Both APU families have full support for DirectX 12, provide great audio, UVD, VCD, DCE features and support Dual Graphics, Panel Self Refresh, Dynamic Bezel Adjust along with the ability to run up to 3 simultaneous displays.

The Bristol Ridge APUs will feature up to four x86 Excavator cores with 2 MB of shared L2 cache. They will have support for HSA 1.0 and the latest DDR4 memory standard. The Excavator core ensures better IPC (Instruction per clock) versus previous generation cores. So we can see faster clock speeds at the same wattage given the better efficiency of the new parts. 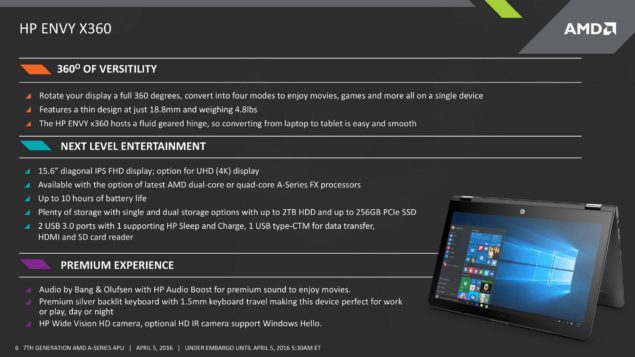