Remember the Radeon R7 SSD launch we told you about a few days back? Well, the official launch happened earlier today. The Radeon R7 SSDs are basically an initiative of AMD and OCZ to sell OCZ based Solid State Drives under the AMD brand name, therefore reaching more customers and targeting a specific market (gaming). I have the entire slide deck with me, but I am afraid I still don't have word on what the pricing will be and how it will compare to the rest of the SSDs. 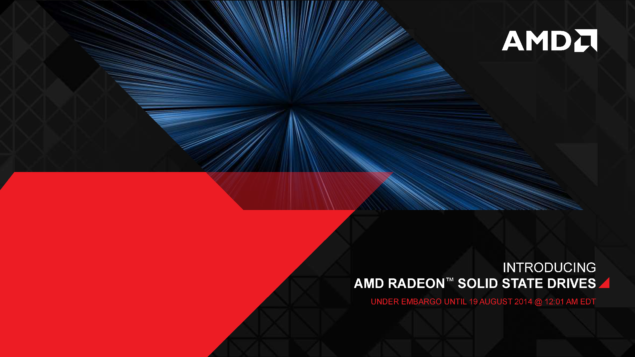 The Radeon R7 SSDs slot in between the 'Mainstream' Vertex 460 Series and the 'Workstation' Vector 150 SSDs. The R7 SSDs use the same controller as the Vector 150 and the only difference lies with the flash. Where the Vector 150 uses the 19nm MLC (Toshiba Multi Level Cell) node, rated for 50GB of write per day for 5 years, the R7 uses A19nm MLC (notice the added A) rated for 30GB of write for 4 years. The interface is ofcourse SATA III 6GB/s and the form factor is 2.5 Inches with an ultra slim 7mm width. The disk is 256 Bit AES path compliant and contains the usual features such as SMART and has an expected life span of 4 Years (30GB per day) or 42.7 Terabytes of write. It consumes a marginal 2.7W of power and can operate from 0c to 70c. The Radeon R7 SSDs can withstand shocks of upto 1500Gs and an operational vibration of 7-800Hz. Here are the specs and the complete slide set of the Radeon R7 SSDs.