Update: Looks like the fight has officially begun and this launch is looking more like the announcement of a new generation of graphics cards as noted in a statement by AMD's Roy Taylor.

AMD might be getting ready for a new product announcement which could either be a CPU or a GPU. As tweeted by AMD's India page, it looks like AMD has a special announcement coming on 25th September 2014 which might be related to a new graphics processing unit or a new FirePro product so let's hop in and find the possibilities of what this launch could be related to. 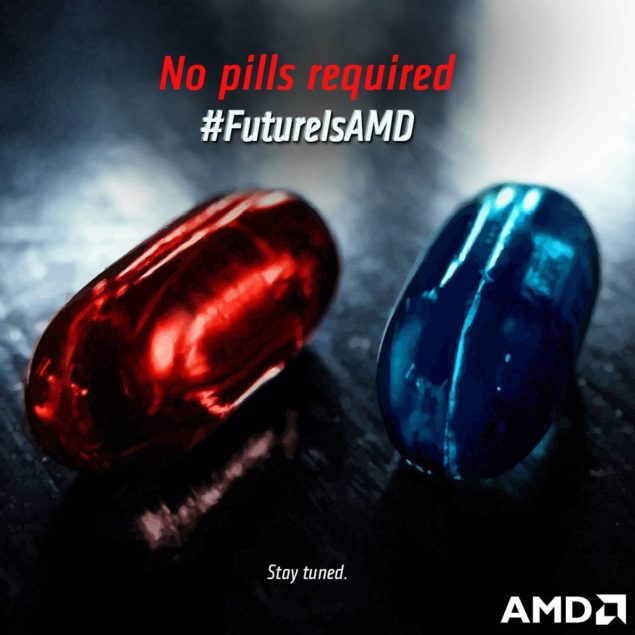 AMD Might Be Announcing Next Generation Product on 25th Septemeber

The AMD GPU related teaser comes in just one day after NVIDIA unleashed their Maxwell graphics card which include the GeForce GTX 980 and GeForce GTX 970 in the graphics industry ushering a new era of powerful and highly efficient graphics cards. But looks like NVIDIA isn't the only one with new announcement at hand and AMD might possibly have an answer to that coming soon. The tweet is pretty simple but looks like AMD is once again using their pills campaign to market the new GPUs. You can see the tweet below before we move into a deeper analysis on what's going on:

Are you ready for a glimpse in to the future? #FutureIsAMD pic.twitter.com/9Q3haEgis0 — AMD India (@AMDIndia) September 20, 2014

As you can note, there are two pills in the marketing slide. One is colored blue and one is colored red. Now first of all, there was a pills related marketing campaign which AMD ran a long time ago during the launch of the HD 7770 GHz graphics card. The Verdetrol pills were used as a teaser for the launch of the first GHz edition graphic card from AMD but they did another teaser with the Radeon R9 295X2 where they used two packs of chips and a water bottle to indicate their water cooled dual GPU solution. The same can be seen here, there's a red pill which might indicate a water cooling solution such as the one that was leaked a while ago and the red pill may indicate the Radeon chip which will be used to power the graphics card based on the GCN architecture. So it could be related to a new graphics launch as AMD was rumored to launch the Radeon R9 285X sometime in late September as earlier rumors indicate however the launch might possibly be related to a new product which we haven't hear of before.

The second most interesting thing is that AMD has another teaser for a FirePro product where they ask "Can you name our first product that processed graphics independently of the CPU". So it could be related to either a Radeon or a FirePro product but we can't really say for sure since this teaser came out of nowhere at a time when no AMD related leaks or product announcements at sight. The date is also surprising since a year ago on 25th September, AMD held their GPU14 event where they announced their Radeon R9 and R7 series graphics cards. They could use a similar platform to unveil new products or a new

In October last year, AMD announced their GPU14 event where they showcased and announced their current Radeon R9 and Radeon R7 series cards that feature an updated GCN core architecture. While the bulk of the graphics cards were based on an older core architecture (Southern Islands; Tahiti/Pitcairn/Cape Verde) the lineup also introduced some new parts such as the flagship Hawaii, performance oriented Tonga, budget level Bonaire and entry level Oland chips. It will be a year since AMD has introduced most of their lineup next month and will probably be the best time for AMD to offer new replacements.

So the main question of the day, is this the Radeon R9 300 series or the Radeon R9 200 series or something entirely difference and non-related to GPUs? To be honest, I don’t really know. Some point out to Radeon R9 390X and some point out to the much fabled Radeon R9 295X but I am not in the position to either deny them or confirm these codenames for the new card. One thing I know is that AMD only switched to Radeon R9 200 series after the HD 7990 launched in 1H 2013 after a long delay. There was no  new card in the HD 7000 series after that. The Radeon R9 295X2 is also the last flagship card to launch in the lineup but AMD has updated their entry level side with a few cards and the performance sector with the latest Radeon R9 285 Tonga GPU. To rebrand it this early may make little sense but then again we are talking about a launch aimed around Q4 2014. At the end of the day, there’s so much happening in the graphics industry that it’s getting interesting day by day. If AMD does have new high-end chips ready to tackle Maxwell then that’s a good thing since competition will drive prices down.