AMD, today announced at the GDC 2013 (Game Developers Conference) their new Radeon Sky series server class graphics card built entirely for one purpose - Cloud gaming. With the Graphics Core Next architecture, AMD's Radeon Sky series aims to stream games off the cloud while being rendered on these new GPUs from a server.

With cloud gaming through Radeon Sky series, users would be able to play the latest games on any computing devices such as PC, TV, Smartphones, Tablets, Notebooks, etc. This is achieved with AMD's latest Rapid Fire technology which has been designed to support multiple stream GPUs and optimized for low latency providing seamless HD playback without any hickups. AMD has launched three new GPUs under their Radeon Sky series brand built exclusively for cloud gaming purposes. They are listed below: 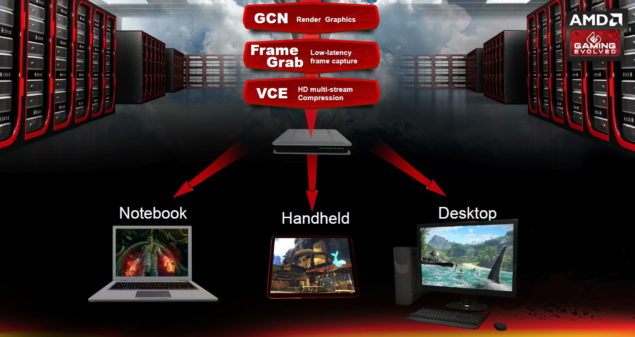 SAN FRANCISCO - Mar. 26, 2013 - Today at the Game Developers Conference (GDC) AMD (NYSE: AMD) unveiled its leadership strategy for the worldwide gaming market. AMD's Unified Gaming Strategy comprehensively addresses how AMD will drive the gaming market across consoles, cloud platforms, tablets and PCs. By working with the world's leading hardware and game developers, and by continuing to be a leader in the market by providing the most innovative graphics technologies, AMD is effectively positioned to drive the next revolution in gaming.

Gaming Evolved, launched three years ago at GDC, is at the core of the AMD Unified Gaming Strategy, and has been the driving force behind the revolutionary "Never Settle" gaming bundles and a major factor behind the adoption of powerful AMD engines in the latest next- generation gaming consoles. Building on this momentum, AMD today introduced AMD RadeonTM Sky Graphics, the cornerstone of AMD's industry-leading cloud gaming platform.

"Real-time gaming through the cloud represents a significant opportunity and AMD is poised to lead in this vertical thanks to our extensive graphics hardware and software capabilities," said David Cummings, senior director, AMD Professional Graphics. "AMD is working closely with CiiNow,G-Cluster, Otoy and Ubitus to deliver exceptional AMD RadeonTM gaming experiences to the cloud."
Built from the ground up on the AMD Graphics Core Next architecture, this best-in-class graphics technology will lead the way in performance and define cloud gaming experiences for gamers. By working with industry-leaders like CiiNow, G-Cluster, Otoy and Ubitus, AMD has developed flexible cloud gaming technology and designed a solution that enables game developers and service providers to deliver a world-class content experience to millions of gamers whether it's through PCs, tablets, Smart TVs or mobile devices. Powering this seamless experience is AMD RapidFire technology, enabling highly efficient and responsive game streaming.

With the arrival of the AMD RadeonTM HD 7790 graphics card last week, AMD continues to deliver outstanding graphics products. Based on the award-winning Graphics Core Next architecture, the AMD Radeon HD 7790 GPU was made for gamers looking to play the latest games, including Gaming Evolved titles such as Crysis 3 and Tomb Raider, at the right price point.
"We continue to innovate and push the boundaries of our discrete graphics products," said Matt Skynner, corporate vice president and general manager, AMD Graphics. "Gamers demand the best experience across all of our products and with the AMD Radeon HD 7790 GPU, they receive the latest AMD Radeon technology at a competitive price point."

Packing in AMD Eyefinity technology and the award-winning Graphics Core Next architecture, the AMD Radeon HD 7790 GPU also features an enhanced version of AMD PowerTune technology, which enables higher performance and immersive gameplay to gaming rigs. This latest addition to the AMD RadeonTM HD 7000 series of graphics products is the ultimate choice for gamers looking to maximize their gaming experience in the USD$150 MSRP range. The AMD Radeon HD 7790 GPU is expected to be available from all AMD add-in-board partners during the first week of April.

Ruby: Rebooted, Reborn, Reloaded
GDC also marked the 10th anniversary of the launch of the original iconic AMD "Ruby" demo. To celebrate this milestone, AMD unveiled a sneak peek of its remodeled and reinvented Ruby, which was designed and developed by IllFonic, and harnesses the power of Crytek's CryEngine® 3 development engine. The latest AMD "Ruby" demo is still under production and is designed to highlight real-world gaming possibilities of AMD Radeon graphics technology. It will be unveiled to the world in the coming weeks.

BioShock Infinite: The Best of DirectX® 11

As part of the "Never Settle: Reloaded" bundle, AMD is proud to announce the arrival of "BioShock: Infinite." With DirectX 11 PC-exclusive features such as anti-aliasing, texture detail, texture filtering, dynamic shadows and more, AMD is empowering gamers to unleash the most realistic gaming experience. Each of these features were developed in close collaboration with Irrational Games and the AMD Gaming Evolved team, ensuring the best experience for PC gamers choosing AMD Radeon graphics cards.

"Fifteen years ago, Irrational Games got its start making PC games, and the PC gaming experience has always been near and dear to our hearts. Working with AMD allowed us to make the most of the DirectX 11-powered graphics," said, Chris Kline, technical director, Irrational Games.