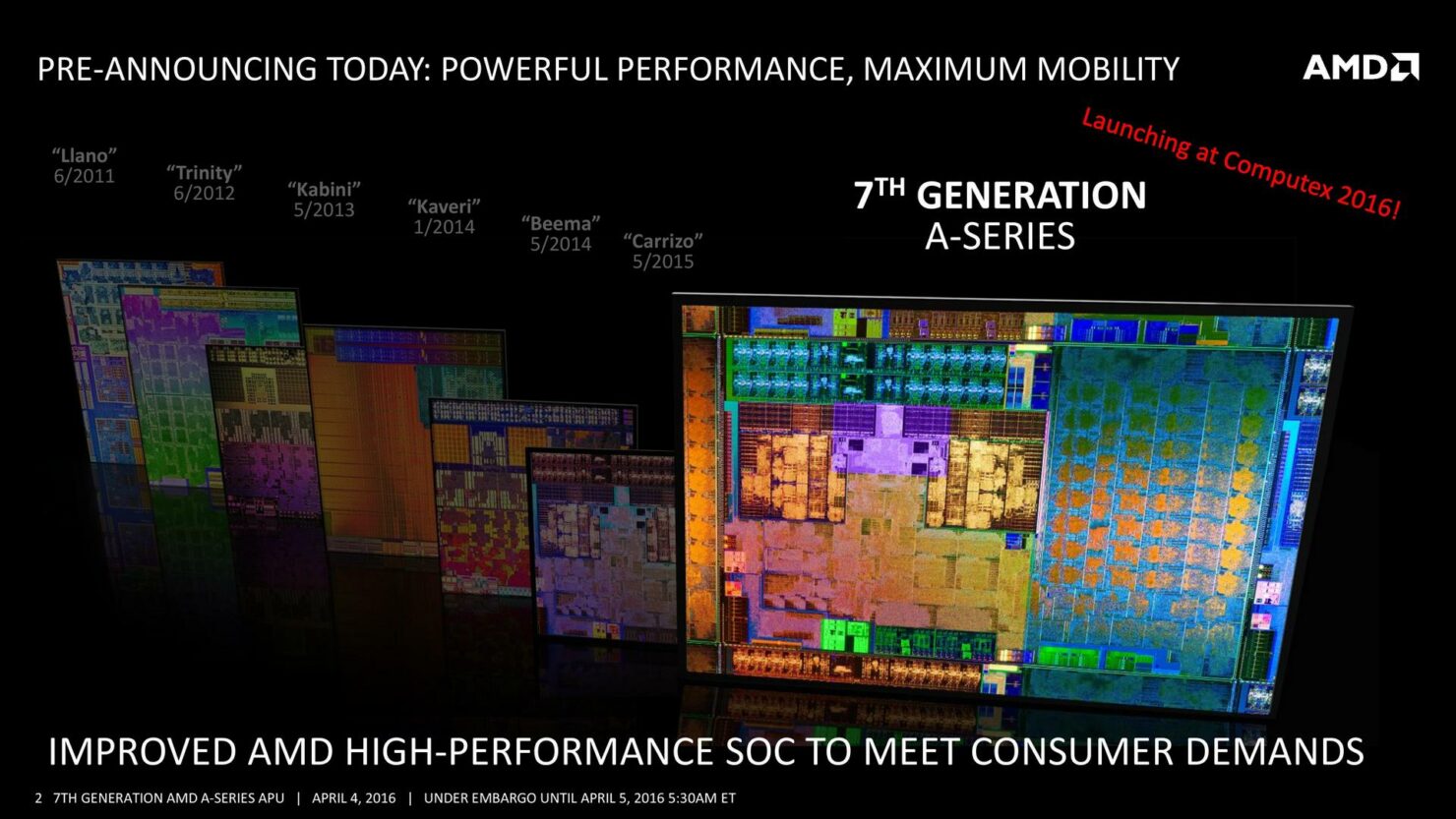 AMD is getting ready to unveil its 7th Generation APU lineup at Computex in a few weeks, but since our readers can't wait that long, we thought we would post the specifications of AMD's upcoming lineup of AM4 APUs anyways. The brand new processors will be landing in June along with the AM4 motherboards and will be the first to feature Excavator on the mainstream desktop platform. They will offer significant performance increases over the previous iterations of Kaveri and Carrizo (Mobility).

All six SKUs fall into the full power (65W) or low power (35W) variants. All SKUs utilize the AM4 socket and support DDR4-2400 memory. It is worth noting that the boards supporting the AM4 socket will be landing next month in June. AMD will be revealing the platform at Computex in a few days and we expect to see the entire lineup of AMD’s 7th Generation APUs present there as well. Raven Ridge will be succeeding Bristol Ridge and will be based on the 14nm process with Zen cores.

AMD's 7th Generation APUs on paper appear to be very Carrizo-like in their specifications apart from the fact that they are full fledged desktop chips. The amount of GCN cores featured maxes out at 512. As mentioned above the processor architecture will be Excavator while the GPU architecture should be a revised iteration of GCN (dubbed GCN 3.0). Bristol Ridge APUs are going to have one very interesting feature: support for DDR4 memory, specifically dual channel DDR4 2400 Mhz. You might recall how APUs are very dependent on memory, so this is going to be a very nice feature for AMD's shiny new APUs.

AMD's next generation Bristol Ridge's Excavator cores will have high clock rates which means that performance gains will be architectural in nature as well as the usual clock advantage. Clock for clock comparison with Kaveri should be very interesting. Gaming performance increase is stated to be around 20% of Carrizo Mobility and over 50% of Kaveri! The APU will have full HSA support and OpenCL 2.0. It will also have the AZ/I2S Audio Co-processor on board for sound processing (duh). The chipset is ofcourse Promontory. Its worth mentioning that Summit Ridge is at the 14nm node while as Bristol Ridge is still at 28nm. So all that while remaining on the old and trusty 28nm process is quite a feat. Full specifications of the AMD's 7th Generation 'Bristol Ridge' platform:

AMD Ryzen 3000 Series To Feature Support on X570 Chipset Based AM4 Boards – Allegedely The First Platform To Support PCIe 4.0, Launching at Computex 2019