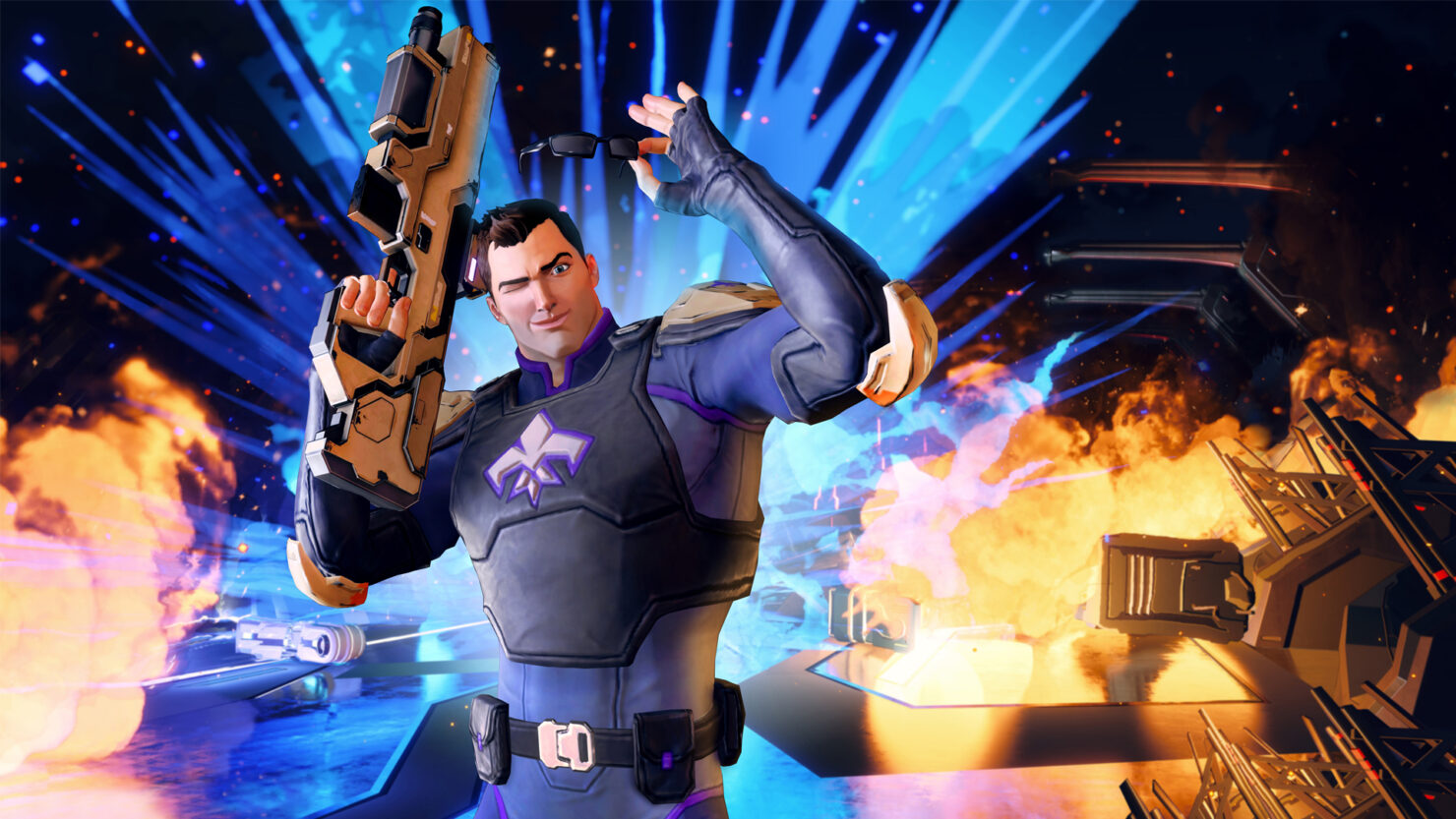 We recently had a chance to interview the team at Deep Silver Volition about their upcoming open-world, squad-based, comic book-esque, Saints Row-influenced shooter (wow, that's a mouthful), Agents of Mayhem. Speaking with Kate Nelson, Producer at Deep Silver Volition, we were able to gain a bit more insight on the upcoming Agents of Mayhem, set to launch in North America on August 15th, 2017 on PlayStation 4, Xbox One, and PC with support for both the PS4 Pro and Xbox One X platforms as they become available; we'll also have a hands-on preview coming up soon, so stay tuned.

WCCF: Agents of Mayhem is now less than two months away from launch in North America and Europe. How is the final stretch of development coming along? Is Agents of Mayhem considered feature complete already?

Kate Nelson: The final stretch of development is coming along great! Most games wrap up months before they are on the store shelves due to retail, manufacturing, and submission needs. We use this time to continue to polish the game, start developing downloadable content and other initiatives.

WCCF: I was always a fan of digging around the character customization tools in the Saints Row series to make some of the most ridiculous characters I could think of. Now that players will have three agents at their disposal, how much customization will each agent have? Are the costume choices purely limited to skins, or will there be additional accessories to pick from as well? How will additional skins be unlocked during regular gameplay?

Kate: We wanted each of the playable characters in Agents of Mayhem to be iconic and recognizable – so visual customization of playable agents includes changing the full model skin (which include changes to hair, clothing, tattoos, etc. depending on the agent) as well as selecting weapon skins – to varying degrees, but always in a way that works to complement their personality. Customization of gameplay kits (combat abilities and other abilities) of agents is a huge part of Agents of Mayhem. When you are selecting your squad of three agents and leveling them up, you also have the ability to customize each individual playstyle of each agent. For example, you can push Hardtack to be more melee focused or shotgun focused. Between all of the ability customization and choosing a squad of three agents, there are around 500,000 different combinations of squad/agent gameplay customization.

WCCF: Agents of Mayhem certainly has that comic book aesthetic all over it. Were there any particular series that helped to inspire the story and style?

We took inspiration from several places! Comic books, animated series, Saturday morning cartoons, movies, and more! “Mature” G.I. Joe was a phrase heard around the office a lot early on.  We knew we wanted players to feel like they had a toy box full of fun action figures at their disposal. We also have injected nods to things like “the more you know” PSAs that aired in the 80's in the USA with each of our agents and villains giving “educational” advice to players.

WCCF: The agent roster has grown since the first time I got to check out Agents of Mayhem back at E3 2016. How has the feedback been in terms of character balancing? Did you find that some team combos were under/overpowered compared to others?

Kate: Character combat balancing takes a large effort. Throughout development, we conduct regular playtests of Agents of Mayhem where people play the game and we collect data that is analyzed for balance reasons. Agents are balanced relative to each other to ensure they each have a “niche” between their primary weapon use, special ability, and mayhem abilities, focusing to make sure they each play differently.  The other part of combat balance is concentrating so that LEGION troops have enough gameplay diversity that players feel they need to make choices in combat. For example, Rama is great against long-range snipetroopers and Yeti is great against melee-focused swarmtroopers that close in quickly.  Each agent’s strengths and weaknesses have an answer in LEGION to keep players on their toes.  There are definitely some squad combinations that shine, especially at the higher levels where more abilities and synergies are unlocked in agent combat kits. What is exciting about Agents of Mayhem is that we have a difficulty system that should keep players challenged – there are 10 levels of difficulty that can be set on a sliding scale of escalation with another 5 that unlock once players reach the endgame. Higher levels of difficulty mean more XP and loot gain, but also stronger enemies who advance in rank and ability sets/stats.

WCCF: Since Agents of Mayhem is set in the same fictional universe as Saints Row, seeing Johnny Gat join the roster is sure to excite longtime fans. Will we see other influences from the Saints Row titles, or perhaps something that ties this all together to the insane ending from Saints Row: Gat Out of Hell?

Kate: Great question! At the end of Saints Row: Gat out of Hell, Johnny Gat is posed with multiple potential endings to the game. Agents of Mayhem keys off of the ending where players choose to “have God re-create the Earth and retcon the entire world of Saints Row”. There are multiple Saints Row nods in Agents of Mayhem – from tone to playing an alternate universe version of Oleg (Yeti) and Pierce (Kingpin), and even a cabbit cameo (a tradition of Volition games since the Summoner series).

WCCF: Being able to call in the team’s signature vehicle on demand is great for getting around Seoul. How much vehicle customization is there to Agents of Mayhem, and what’s stopping players from just carjacking a passerby on the way to their next heroic mission?

Kate: Players will be able to unlock 10 different types of agent vehicles and in the ARK (the Mayhem base) and can choose which agent vehicle comes when called.  Each vehicle has their own set of skins to unlock and choose from – including a custom skin designed to match each one of the Agents. For example, ex-military Braddock’s truck proudly includes an American flag. The advantage of calling an agency car over taking a civilian one is that agency cars come equipped with a powerful nitrous boost which can be upgraded as well as an entertaining AI voice companion. But feel free to pull out Johnny Gat’s badge and “commandeer” any civilian vehicle you desire.

WCCF: The Xbox One X is coming out a little over two months after the game's launch. How will Agents of Mayhem take advantage of the more powerful platform? Will the PlayStation 4 Pro see similar improvements? Can you share your targets for frame rate/resolution across these improved consoles, and will the PC version be far ahead in terms of graphics quality?

Will the game support HDR displays and if so, on which platforms?

Kate: Whenever a new platform or upgrades to an existing platform is announced, we take a look at what it will take to support it. Agents of Mayhem will have HDR support for the PS4 and PC. During development, we target 1080p with at least 30fps and often find we go higher as consoles grow. Higher end PCs by nature have a hardware advantage over consoles in terms of performance. The more powerful platforms will see an increase in population, civilian and vehicular, making a more dense and vibrant Seoul to create mayhem in.

WCCF: Roughly how long should players expect to spend defending Seoul against the forces of L.E.G.I.O.N.? What about for those that want to scour for every collectible and earn every achievement?

Kate: Estimating play time in Agents of Mayhem is a bit difficult due to its open world nature. The critical path is 20+ hours of gameplay, and beyond this, players can level up their agents and agency, play through the global conflict meta game to unlock top tier LEGION lairs, replay missions while trying out different agent combinations, and capture LEGION outposts out of the open world of Seoul. Completing the critical path only levels your agents to level 20 out of 40 possible levels. So, after you beat the game, you’re really only halfway into the fun.

WCCF: Many are still wondering why the game doesn't feature co-op. Is there any chance you might add it post-launch if there's a strong demand for it?

Kate: We are happy that Agents of Mayhem focused on a single player experience because this format allows us to tell the types of stories and provide the type of experiences we want people to have in this mature nostalgic cartoon throwback. We are always happy to hear thoughts from our fans.

WCCF: Are there future DLC plans in the works to keep players coming back to Seoul after tracking down that elusive platinum trophy on PlayStation 4?

Kate: Yes. At this time we have announced some agents that have joined the (MAYHEM) roster – Lazarus and Johnny Gat. These agents come with their own unique sets of missions, abilities, gremlin tech, and are able to be played throughout the critical path.

WCCF: Thank you for your time.