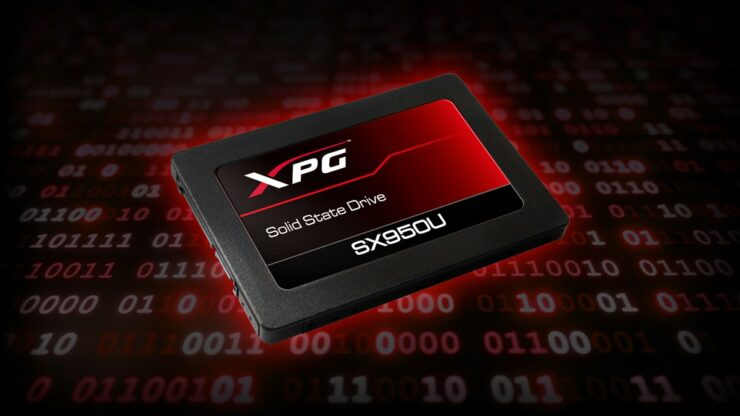 One of the leading brands in Memory, and Flash Storage ADATA Technology, today launched the XPG SX950U 2.5" SATA 6 Gb/s Gaming SSD which utilizes the latest 3D NAND Flash memory which is generally Micron, although they do not specify and may use Toshiba NAND as time goes on. It is driven by a Silicon Motion SM2258 controller to reach large capacities of up to 960 GB with close to the highest read/write speeds possible on a SATA III connection up to 560 Read and 520 MB/s Writes.

ADATA XPG SX950U 3D NAND and a Drive For Gamers

At this point for the best performance many users are switching to NVMe m.2 SSDs for their OS drive, and at this point with costs many are choosing for a separate drive used with the sole purpose of game storage with triple A titles benefiting from faster storage like the recently released FFXV and other open world titles allowing lower load and launch times.

Furthermore, the SX950U is equipped with Intelligent SLC Caching and a DRAM Cache Buffer to provide an optimized and consistent performance. To ensure data integrity and the safety of data transmission, the SX950U features LDPC ECC and RAID Engine technologies, enhancing the stability of the system and extending the SSD's lifespan. For PC enthusiasts and gamers in pursuit of the optimal gaming experience, the SX950U is the ideal choice for improving system performance at an affordable price.

To prevent errors from occurring during data transfer, the SX950U supports LDPC ECC (Low Density Parity Check Code) to enable algorithms to operate in real-time, precisely decode, and improve the quality of data transmission. In addition, the SX950U has built-in RAID Engine and Data Shaping technology for data safety and provides superior stability with a long lifespan. The SX950U offers the added benefit of an extended 5-year warranty as befits its premium quality.