The Ace Combat 7 trailer premiered during the PlayStation Experience 2015 keynote, announcing that the game would be released for PlayStation 4 with PlayStation VR support. Today, the latest issue of Famitsu revealed more details on the game. 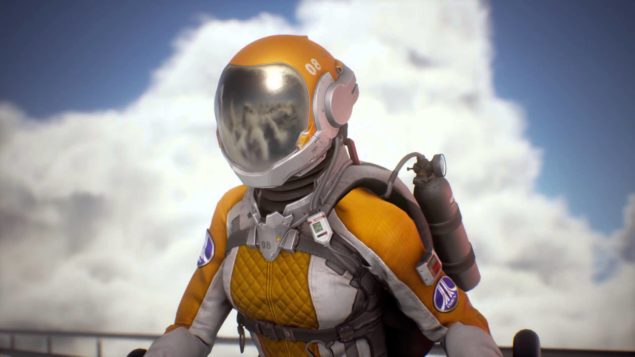 The Esoteru blog has picked up some of that information. Apparently, that stunning Ace Combat 7 trailer (embedded below, in case you haven't seen it yet) was fully rendered in real time.

Clouds are actually objects in a 3D space and if you aim for a specific cloud, you can reach it now. Space elevators are a thing in the world of Ace Combat and the large aircraft appeared in the trailer is actually tasked with protecting the space elevator.

Of course, one of the big features is the integration of PlayStation VR. According to the development team, virtual reality was a good match for Ace Combat 7.

The game will be powered by Unreal Engine 4 and trueSKY technology; a campaign mode has been already confirmed alongside online multiplayer battles.  Hervé Hoerdt, VP of Marketing and Digital at BANDAI NAMCO Entertainment Europe, said:

It’s no small feat for any video game franchise to thrive over two decades; ACE COMBAT’s legacy lies in its tremendous quality and deep storytelling. With ACE COMBAT 7, we are planning on dominating the skies once again and delivering an unparalleled experience thanks to the PlayStation®4 technologies and to our team experience with their know-how!

We'll keep you updated on any Ace Combat 7 news, so stay tuned, though with development reportedly at 20% the game might not release until 2017.