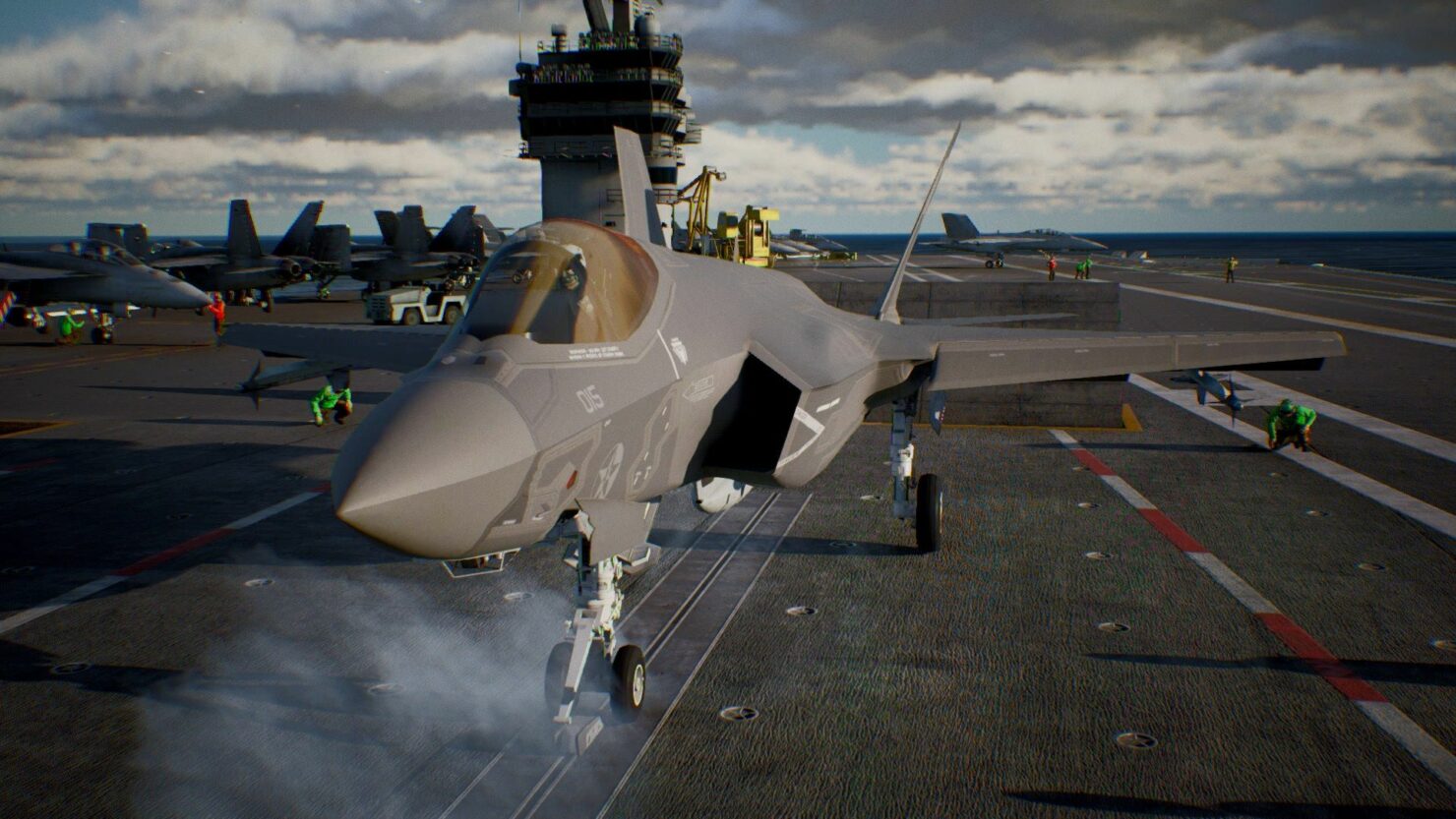 Front and center at Bandai Namco’s booth at E3 2017 were a trio of flagship titles for the coming year: Dragon Ball Fighter Z, Ni no Kuni II: Revenant Kingdom, and Ace Combat 7. While I had the pleasure of getting hands on with all three, it was the latter that stood out as the long-awaited chance to get back into the cockpit and visit Strangereal once more.

The Ace Combat series has an undeniable style that sets it apart from any other flight simulator on the market. With just enough realism to provide a worthy challenge and the perfect balance of arcade-style scoring and control, there’s a reason why this has remained a personal favorite franchise of Namco’s for many years. In my air-to-air combat, I expect twenty to one odds and an orchestra (or flamenco guitars, if you want to get exotic like Ace Combat Zero) accompanying my sortie. In that regards, Ace Combat 7 certainly does not disappoint. While not on the same epic scale of The Unsung War’s most notable tracks, the musical accompaniment of Ace Combat 7 is still worthy of being added to a classical playlist of tracks to get you motivated to take on the world. 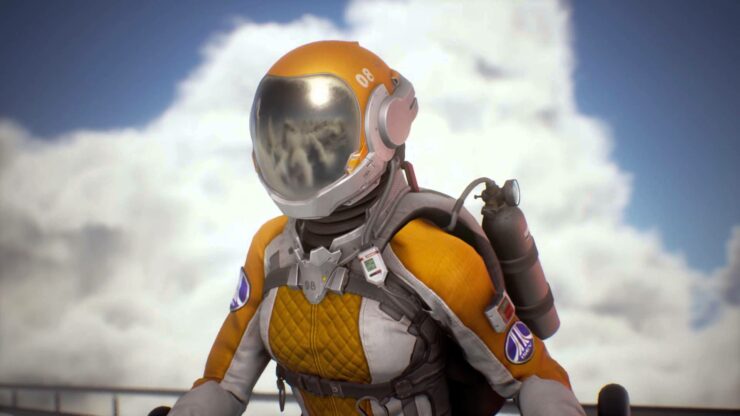 On the PlayStation 4, whether you play strapped into a PlayStation VR headset or not, the controls feel natural on a DualShock 4 controller. It’s been a few years since my last tour of duty in Strangereal and it’s perhaps the first time I haven’t played with the control of a proper flight stick. Despite this, the aerial dogfights were quite easy to control and following targets for both missile and gunfire felt as good as it did in the last numbered Ace Combat entry.

Between the two demo stations for Ace Combat 7, one operating in PSVR and the other without, I found myself more interested in the virtual reality side to Ace Combat 7. This demo took place in a slightly different mission than the non-VR offering, opting for more of a traditional dogfighting experience than the massive drop of unmanned drones that was showcased in the recent trailers. I hadn’t played a flight sim since last year’s hands-on with War Thunder VR for the HTC Vive, but that didn’t stop my body from remembering that adrenaline rush once back inside the cockpit. The motion felt incredibly fluid and the sense of realism had me leaning around in my seat as my plane tried to follow and shoot down an enemy ace. Flying around at a higher top speed than War Thunder might make other players uncomfortable with the motion, but I was still high on energy and feeling quite well, unlike certain other PSVR experiences that I’ve recently tried.

After getting a satisfying two-mission hands-on with Ace Combat 7, I had the pleasure of having a chat with Kazutoki Kono, head of Project Aces and the producer behind the upcoming Ace Combat 7, due next year on PC, PlayStation 4 (with PS VR support) and Xbox One. 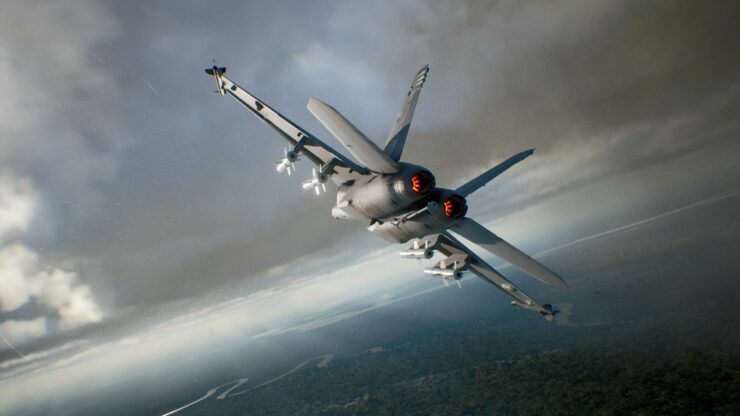 [....] (For) Ace Combat 7 I am the Producer, Kazutoki Kono, and now I have inherited the responsibility of not just Ace Combat 7, but also overseeing the franchise as a whole.

It’s been some time since Ace Combat 7 was first revealed. What is new for this game, even for people that haven’t seen it since last year’s E3?

The biggest reveals, between the initial announcement and this year’s E3, is the progress made on the non-VR mode: the kind of canon story mode, which I think a lot of Ace Combat fans have been looking forward to.

It’s (also) been a long time since fans have been able to go back to Strangereal. Where does this fall into the timeline between other Ace Combat titles?

This is going to take place twenty years after Ace Combat 5 (The Unsung War). In (Strangereal’s) timeline, it will be 2019.

In terms of graphical settings, do you know how the Playstation 4 and Playstation 4 Pro versions stack up compared to the PC release?

We are currently in the process of optimizing the PS4 version and we are going to tackle the Pro and PC versions after we get the PS4 running at a state where we feel comfortable. Spec wise, for the PC, we have collected some data via Steam on what sort of benchmark people expect for it to be considered a good game, so we definitely know where we want to target on the PC. We just haven’t gotten around to doing that yet.

One thing that’s been a common talking point for a lot of games is the use of HDR lighting. Will that be present in the PS4 and PC versions of Ace Combat 7?

There aren’t any plans at the moment to really explore HDR opportunities since the team is familiarizing themselves with Unreal Engine 4. Right now, we are trying to present the best possible form of Ace Combat while familiarizing ourselves with the engine, so HDR is probably the next step after that.

One last technical question: In regards to the PSVR, are there any specific enhancements that owners that of the Playstation 4 Pro might see over the standard Playstation 4?

Again, it’s going to be a similar answer to what I said before. PSVR, on the standard (Playstation) 4, we are really working on optimizing that. The difference between your normal non-VR mode and VR mode is that in VR, we need to maintain 60 frames per second. We don’t know how much once we lock the framerate, we can explore in terms of enhancing the visual elements on the PS4 Pro VR.

Back to more of the gameplay and story, do you have a rough length or mission count for the primary campaign to Ace Combat 7?

As we’re developing Ace Combat 7 on the next generation console for the first time, we’re really trying to balance the allocation of resources versus playtime because we’re developing it from the ground up. We really took it into consideration how many hours the fan or consumer might be expecting to find on a brand new console, brand new launch. Right now, we’ve landed volume-wise somewhere in between four and five (hours), which I think is a great volume.
I think there’s going to be a lot of playability and replayability between, of course, the campaign mode, the multiplayer elements that will be added on, as well as the VR experience.

Is the VR experience something that is separate from the main campaign, or can you play the entire campaign in virtual reality?

The content that players will be able to experience on VR is completely exclusive from the main storyline campaign. Part of the reason is, while the goal of trying to recreating that feeling of being an ace fighter jet pilot in the story of Ace Combat has not changed, the approach is slightly different. In the campaign, we take a more cinematography type of approach, where it feels like you are part of a movie or story and in VR, we want the person to feel (immersed) and never break that first-person perspective.

In regards to immersion, one of the greatest ways to get into the Ace Combat series is through the use of a flight stick. I still own mine one from The Unsung War. Will players be able to have a similar experience with Ace Combat 7 in the future?

I am considering the adaptation of some kind of joystick or flight stick quite seriously, partially because once you are immersed in the VR environment, having a stick, whether it’s a joystick or throttle, it helps you lock your bearings onto something. You have the VR goggles on, you’re looking ahead, even when you turn your head, you’ll know where the front is whereas when you’re holding a PS4 controller obviously, you can move the controller with your body which breaks up that connection of immersion.
As far as recreating a similar experience to (Ace Combat 5:) The Unsung War, we have the same screenplay and scriptwriter working on this one as well, so we are definitely trying to tap into that feeling people had when playing the PS2 versions.

I’ve already seen some of that similar feeling listening to the music during playing Ace Combat 7.

In regards to the music as well, I approached Kobayashi Keiki who worked on the previous scores and compositions. I really feel in developing and producing Ace Combat 7, we’ve gathered most of the key people who have helped protect and retain that legacy of the numbered series of Ace Combat.

One of the things that’s become a side legacy of just the recent couple of editions is adapting the plane to your own personal style. This was prevalent with the Amiibo support on Ace Combat: Assault Horizon Legacy+ as well as, I believe, some of the Idolmaster skins for Ace Combat 6. Will players be able to customize their plane in a similar fashion?

As far as customization is concerned, you’ve seen the E3 demo and can get a sense of scale and specs and customization of weapons that we are going to be able to produce for players. That being said, as far as visual and personal expression, we are going to have a range of emblems and artwork that people can choose and attach to their craft.

The main campaign isn’t going to feature much customization, partially because there is a story and narrative that we want to help preserve.

Yeah, you don’t want to break the immersion by flying out with magical girls adorning your plane.

It would be a whole different story at that point.

When can gamers expect to get their hands on Ace Combat 7 for themselves?

We went to the drawing board and realized we need a little more time to brush it up and really make the finer details and tuning work. Right now, we are looking at some time in 2018.