The Australian Indie Startup developer, Dream Wave Games earlier today announced their debut game as a studio. And that game is a VR Survival Horror Game "with a Groundhog Day twist" - Absention. They have released an announcement video as well as some screenshots and as much details as possible about the game. 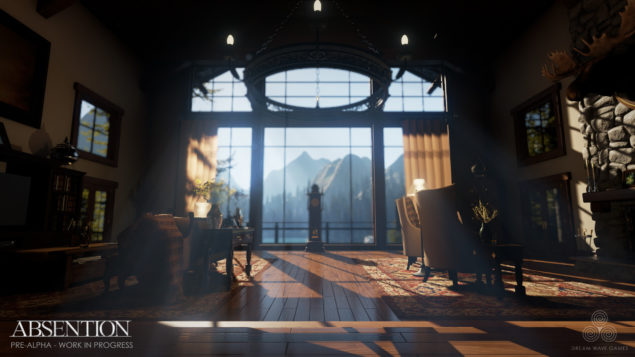 According to the Dream Wave Games Press Release, Absention has been in development for over a year and the idea behind Absention was conceived back in 2012 right after the studio's founder - Robert Bruce, graduated from College. The game takes place in and around a lake house which you (the player) recently inherited from your estranged father who disappeared under suspicious circumstances. The gameplay and game mechanics sound rather interesting, since you will be re-living the same night over and over again (hence the Groundhog day reference,) and you will need to learn from your previous mistakes.

You have inherited a lake house from your estranged father who disappeared under suspicious circumstances. After falling asleep after a long day traveling to the isolated house, you wake to the chilling chime of a grandfather clock. Suddenly the power goes out and in the blackness you see glowing eyes of something running at you. You wake up to the haunting chime of the grandfather clock...

In Absention you explore the mysterious lake house that changes it’s layout every time you play. You memorize key events and learn from your mistakes to overcome the terrifying foe that hunts you. You take that reluctant sprint, risking it all in the hopes that this time you live to see a new day. You uncover the mysteries of your past and escape this eternal night or terror.

The features they have detailed on the game's homepage are the following:

Robert Bruce thinks that “It’s an exciting time to be a survival horror fan. New, innovative hardware and software are now easily accessible to both the developer and consumer.” And I would agree, however on a personal note me and horror games (true horror games) barely agree with each other on a good day, now add VR into the mix and I'll probably suffer from a heart attack. Nonetheless the concept of the game sounds promising in my opinion and the fact that it's made in Unreal Engine 4, makes it even better.