The gap between NVIDIA and AMD widens even more as more and more fans are choosing to equip their PC systems with NVIDIA GPUs. The recent release of AMD's long-awaited Fury X and Fury, has not done much to sway the favor of more fans towards the red team. 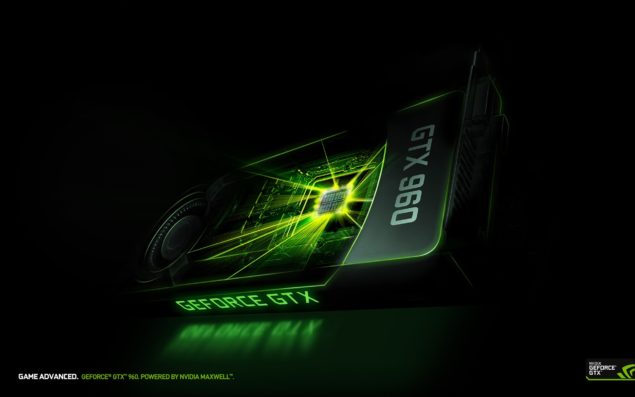 According to Mercury Research's latest data, NVIDIA has gained a market share of 82% in Q2 2015, a big jump from the previous 77%. This means that AMD has seen a drop from a 23% to an 18% market share. Previous reports from April indicated that three out of five gamers chose NVIDIA's GPUs over AMD's, and according to the latest data from Mercury Research this has now increased to four out of five. 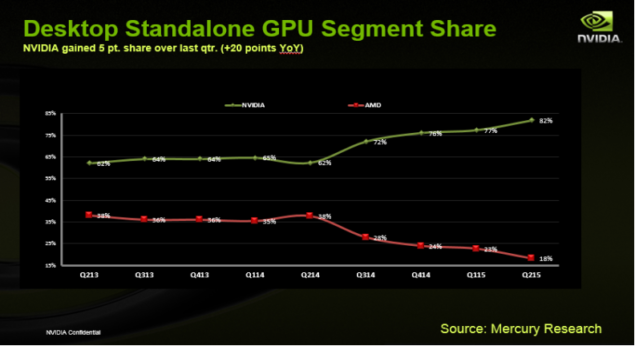 A lot of PC gamers were eagerly waiting for the release of the Fury X, a new GPU promised to bring new gains in performance, and touted as the most powerful GPU available. While some of the claims do hold true, with the HBM (High Bandwidth Memory) implementation being an industry first, leading to some major gains in bandwidth, the actual performance felt a bit short in competing with its direct competitor, the GeForce GTX 980 Ti from NVIDIA.

The slide shown, reveals the market share up until Q2 2015 (or June 30, 2015). The Radeon R9 Fury X was launched on June 24, while the Radeon R9 Fury was launched later on in July, so their sales figures aren’t taken into account. We also know that AMD has had a limited supply chain of Fiji based cards and the ones that are available aren’t selling any better due to the competition by NVIDIA’s GeForce GTX 980 Ti. Enthusiast cards like the GM200 or Fiji powered graphics boards don’t make up the majority of sales of each graphics vendor, they do sell in the high-end market but we all know that the huge market share comes from graphics cards under the $400 US range.

This is one of the reasons why we saw NVIDIA leading the way with their initial GM204 based, $329 US GeForce GTX 970 graphics cards, and the market share further expanded with the launch of the $199 US GeForce GTX 960. AMD on the other hand saw a decline starting in Q2 2014 when they failed to bring new cards to the market, their share with the flagship Radeon R9 295X2 in Q2 ’14 and the Radeon R9 285 but overall, the dual chip card was expensive while the Tonga based offering couldn’t actually get a decent price to performance ratio compared to AMD’s own Tahiti based R9 280 series cards. AMD spent several months following September, without a new launch while NVIDIA released new iterations of GPUs based on their Maxwell architecture for both the budget and high-end markets. This seems to have resulted in a total market share collapse for AMD to the point where NVIDIA dominated 82% of the desktop GPU market while AMD fell down to 18% in Q2 ‘15 from 38% in Q2’14.

On June 18, AMD held a gaming event (cohosted with PCGamer) to bring forward their latest 300 series cards which were readily available in the global market, however the market share once again shows that the cards being based on existing chip architecture meant that users will think twice before buying a rebranded GPU versus going with a Maxwell based card which is a completely new chip architecture. The more grim situation that is developing right now is that the overall GPU shipments have fallen to a certain extent with NVIDIA taking a 16.19% hit in overall GPU shipments while AMD took a 25.82 percent hit in Q3 ’15. While this is bad news for both vendors, NVIDIA had a bigger market share thanks to Maxwell but this could pose a serious threat to AMD whose market share for discrete graphics is already at a record low.

The recently released first DX12 benchmarks do show some different results that seem to favor AMD, but are just the first of many, as more and more games are optimized for Microsoft's new API. Time will tell how NVIDIA's Maxwell architecture stacks up against AMD's GCN 1.2 in real DirectX 12 gaming.

We will bring you any new information on the subject as soon as it becomes available.