Apple is said to launch three new iPhone models this year. The cheapest out of the trio would have to be the 6.1-inch LCD variant which is also said to feature a similar design to the iPhone X. The remaining two models with an OLED panel will be priced a bit higher. Moreover, the price will also depend on the storage variant of the model you buy. Apart from this, we have also heard that the 2018 OLED iPhone is said to feature support for Apple Pencil, something which is only limited to Apple's iPad Pro lineup currently. So let's dive in to see some more details on the matter.

This is not the first time that we're hearing about the Apple Pencil support for the iPhone. While there were several reports on the matter, the notion was encouraged by Tim Cook's slight slip of the tongue. This would not only be a major selling point for the iPhone, but the accessory would see a major boost in terms of sales as well.

Apart from the Apple Pencil support, TrendForce also suggests that the OLED models of the 2018 iPhone will also include a new storage tier, adding to the 64GB and 256GB. With that said, Apple is also expected to offer a 512GB option. 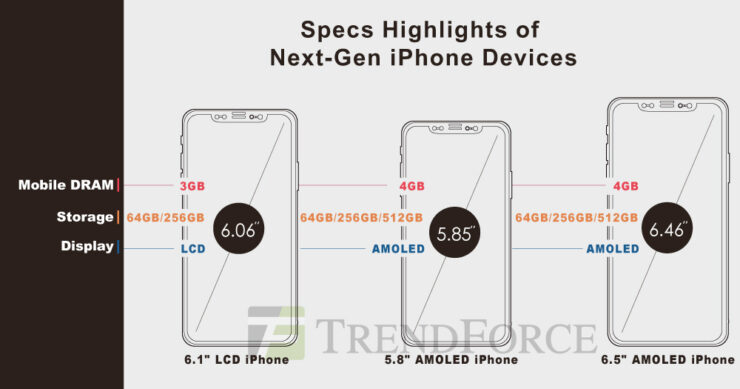 Samsung has also offered 512GB of storage in its latest Galaxy Note 9 which can be further expanded via a microSD card. Apart from this, Samsung's Note lineup has featured the S-Pen since the start and the fact that Apple is gearing support for the Apple Pencil only makes things more interesting. The 6.5-inch 2018 iPhone with OLED display is running towards a more direct comparison with the Galaxy Note 9.

The 6.1-inch 2018 iPhone with an LCD display is expected to feature 64GB and 256GB os storage options coupled with 3GB of RAM. The OLED 2018 iPhone models will feature 4GB of RAM in comparison. Henceforth, the lower price of the LCD 2018 iPhone model is justified. However, it's still too early to jump to the conclusion and the final word always rests with Apple. Probably, Apple will surprise us with its own decision regarding the Apple Pencil.

There will be more to the story, so be sure to stay tuned in for more details. Apple is expected to host the 2018 iPhone event next month, so stick with us as we will be covering the event extensively. This is all for now, folks. What are your thoughts on the matter? Do you want the 2018 iPhone to feature support for the Apple Pencil? Let us know your thoughts in the comments.